Designs in Bringing Up New Players

I’ve been thinking a lot lately about Design decisions that promote cooperation in games. Division 2 is just over a couple weeks old at the time of writing and their scaling for cooperative play really seems to push away rather than bring together. Now don’t get me wrong, Div2’s cooperative play is really fun, it’s geared toward playing strategically which is definitely an improvement from the original. I wanted to compare it to an incentivized return to old content for higher level players, which is something that is present in Final Fantasy XIV.

First Division, the cooperative third person loot shooter features a scaling system in which lower level players get brought up to a level below the highest player. It’s interesting because it helps stronger players to carry lower level, either in an idea to get friends quickly caught up, or make it worthwhile for the high end player to get gear to create forward progress. The choice seems to create a power struggle for the lower level players, requiring a bit more patience and tact that the higher level player is not required to be wary of. In the first Division it took a bit away from the excitement of growth when a high end player can boost a lower level player’s gear by simply trading it over. It soon becomes a challenge of trying to run through a brick wall instead of a challenge of solving the combat puzzle that Division offers when low level gear can’t compete. It’s definitely obvious to simply say, of course low end gear will have a hard time, but it creates a disparity for new players to join friends that have been invested long term. Any fresh player joining has to put in time and the more time potentially burns out their desire to play. If the play loop isn’t rewarding enough for the higher level player to go back it will create less incentive to go back and bring up the new player base. So grind first to get to end game, you might be alone or with a group starting at the same time as you, but a more experienced agent might inadvertently alter your experience in this format. 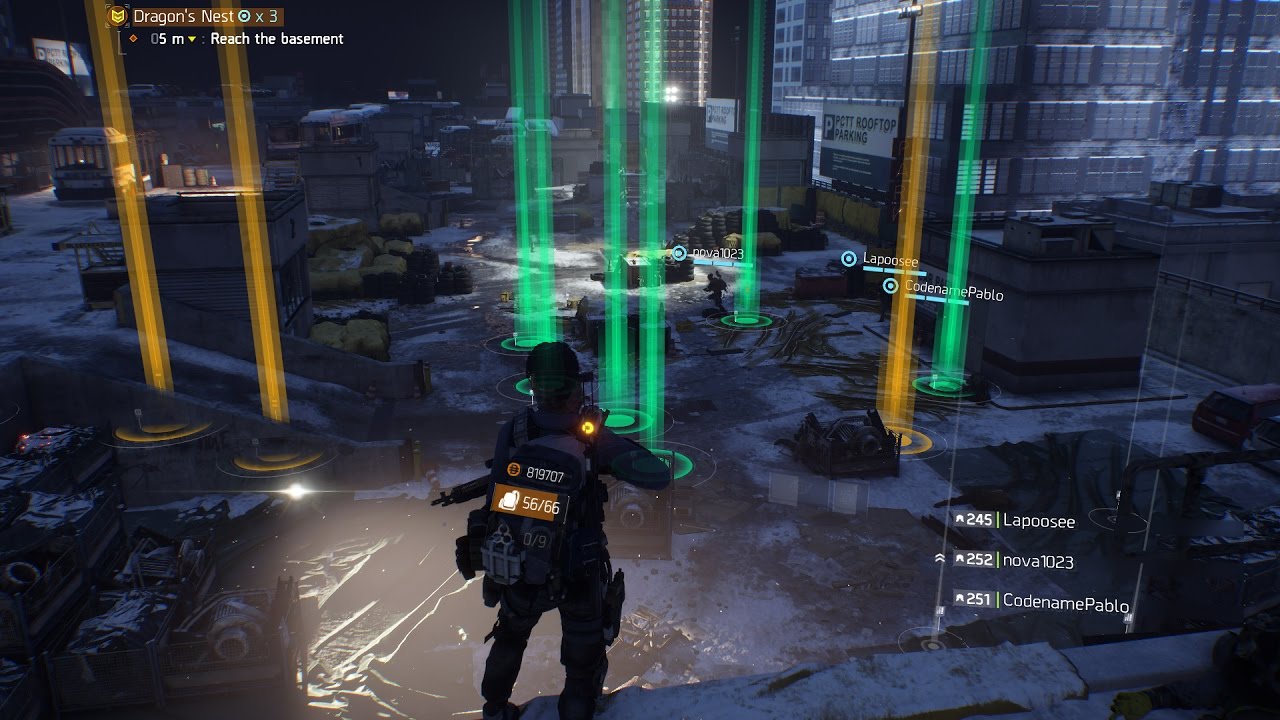 Looking at FFXIV a unique system is in place, one that I think works well, however does feature flaws of its own due to power creep. High level or end game players can queue for what the game calls roulettes, randomized matchmaking for content, the roulettes have bonus incentives for running these daily. The bonus is generally end game currency to help boost the power of the player. With this, potentially these veteran players go back and play the older content that new players will experience. Ideally the veteran players will show the older players the cool gear that can be gained if you keep playing. These veteran players will also teach the new players the mechanics… Ideally. The high level players get powered down to the level that is equivalent to the dungeon. This way the new players are working with the exact same tools the veteran players have, and aren’t missing abilities that they could have at these higher levels.

Granted, in an ideal world everyone will cooperatively work together to help each other improve and learn how to do better in an MMO. Unfortunately the power creep of FFXIV makes this a bit difficult as high end players, despite being desynced to a lower power comparable to the instance, are still too strong for the content. As a result the High Level players still blow through Low Level content essentially carrying the potentially newer player base and generating players that may not know mechanics from experience. Fortunately the latest patch for FFXIV is trying some ideas to temporarily make bosses invulnerable until the mechanic is cleared. I’ve personally yet to experience these changes, but on paper sounds like it’s a change for the better and that the team is aware of the issues.

I would propose that a combination of these two design choices comes together, which is something the latest FFXIV patch seems to be trying to achieve. FFXIV features a mode in which pre-made parties can go into content overpowered, which is fine and should remain. Both design choices allow high end players to show off the gear and loot potential for the new players creating the carrot at the end of the stick. Div2 could adopt the choice in which high level players get powered down so it creates a more achievable experience for the newer or lower level players. FFXIV could also adapt to a true power reduction for high level players to force the use of mechanics, the idea is there in theory, but it isn’t working as intended. If the design choice of FFXIV worked as intended it would help to create a stronger community. Overall, I enjoy both experiences, but I think with some fine tuning and adjusting it could help properly incentivize a stronger play loop for veteran players and thus keep the game more populated in the long run as new players get to consistently see that their missions still matter. Division’s original Incursions (the game’s version of raids) eventually became difficult to run as there was fewer and fewer players needing the content. If revisiting the content somehow provided a consistent end game boost I think it would improve the experience overall.

Are there any other games that you think does a great cooperative experience for end game? An honorable mention that comes to mind is the flare system in Monster Hunter World. Do you think that Div2 could use a better incentive to return to old content to help the new player base?