When I used to write for another gaming website, I did this weekly segment where I summarized the most popular headlines on the site while talking about old video game commercials. Recently, I thought to myself 'Hey, why don't I do that again, but just talk about the commercials this time'? I don't really see anyone else doing C-Blogs about these. Maybe because I'm the only person who gives a shit about old gaming commercials. I want to make this a weekly thing too, if for no other reason than to exercise my writing skills more often and not blow it on some nonsensical bullshit that doesn't really matter. So let's talk about some nonsensical bullshit that doesn't really matter.

The 80s and 90s were a magical time for video game commercials. This was an era where publishers didn't take themselves so seriously all the time. People were allowed to have a sense of humor when it came to selling their products. I understand more people would rather see actual gameplay than whatever nonsense they were watching on screen, given how little information we had about games back then. I get that, but if you're going to make me watch a 30-second advertisement for your product, I'd like it to at least be entertaining. And in a world where we have trailers, screenshots, previews, reviews, let's plays, interviews, and so many opportunities to get information about games, I'd say we need inventive game commercials now more than ever. But I digress.

Today, I'd like to talk about one of my all-time favorite game commercials, the Golden Sun ad. While I'm not as huge of a Golden Sun fan as some people I know, I will always remember this commercial for how batshit insane the whole thing is. It has next to nothing to do with the actual game, but by god is it just fun to watch.

As you can see in the video, you've got a symphony orchestra fighting off a Weeping Angel by lighting their bows on fire and firing them from their stringed instruments like arrows. Then you've got a giant chandelier dragon trying to eat the conductor, so she goes all Harry Potter and uses her conductor's baton as a wand to slay the dragon. All of this is backed by Into the Mountain King which, if you know the lyrics of the piece, is nothing if not appropriate. Does this say anything about Golden Sun? Fuck no! You only get to see a few seconds of footage at the end, and even then you still don't have a clear idea on what the game's like. But hey, it sold just shy of a million units in the US alone, so clearly Nintendo of America was doing something right. They did something so right, the development studio took notice. But we'll get to that later.

Later entries in the Golden Sun series would have more straightforward commercials, but they where no less entertaining. For example, the commercial for Golden Sun: The Lost Age had a wizard trying to summon something to help them, only for things to go catastrophically wrong.

It's not quite as bombastic or as insane as the commercial for the previous game, but it does give people a better idea of what to expect out of it. Then again, maybe Nintendo should've gone with a more over-the-top commercial. The game didn't sell quite as well in North America as the last one. Maybe they should've had the dragon singing Ride of the Valkyries or something. I dunno.

Finally, we have Golden Sun: Dark Dawn, the last game in the series as of this writing. This commercial is far more recent the ones we talked about earlier, so you'd probably expect something with a greater emphasis on gameplay over anything else. Thankfully, Nintendo's antiquated attitudes on commercials shines through, with a live-action segment that might as well have been ripped straight out of the 90s. Much like the last one, this commercial isn't as ridiculous as the first one. It is, however, probably one of the most fucked up commercials Nintendo's made.

Here, you see a teenager reading a magazine while the rest of his family are in full body casts. The father politely asks him to walk their dog, but the kid refuses to. Now, if my family were in full body casts, I would've just ended it there. They're in full body casts, for crying out loud. It's not like they're going to do anything about it. But this kid takes the cruelty to another level! Just for the mere suggestion of walking the dog, the kid decides to sick his Djinn on him! Their family watches in horror as these unholy aboninations slowly make their way towards the dog with the sole purpose of inflicting whatever horrors they inflicted on them. By the end of it, the dog joins the collection of body casts, displayed like some sick trophies for his crimes against humanity. And I thought the original Pokemon commercial was fucked up.

Oh, and remember that chandelier dragon from the first commercial? While it doesn't show up in this commercial, it is featured in Golden Sun: Dark Dawn as a summon. Yes, the Japanese developers actually modeled a summon after something from the English commercial for their first game. It's a nice nod to something that fans will never forget. Such is the power of these old-school video game commercials.

And that's why I like talking about these old commercials. They're weird, hilarious, and occasionally disturbing. But most of all, they're interesting. There's a reason why the Super Bowl commercials are so effective. Whether it's using popular characters to advertize something in an action scene, or putting Willem Dafoe in it, or...whatever this is, it makes for something fun to watch. I think this is something the gaming industry really needs more of these days.

What I'm saying is just put Willem Dafoe in your game commercials, and everything will be better. 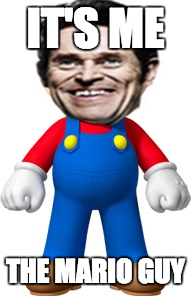