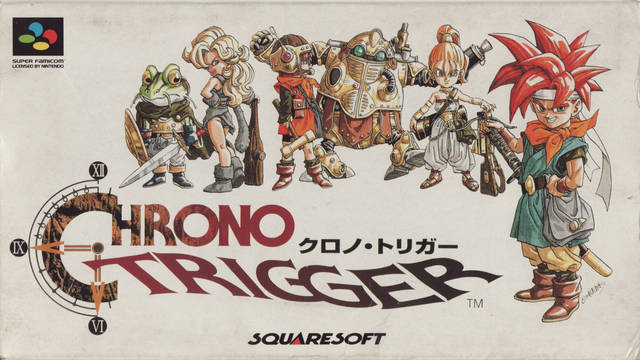 As many of you may have known, TheBlondeBass decided to do a game shuffle where a bunch of us put in suggestions of games we would like others to try and he would randomize the games and let us know who got what. I was given the Chrono Trigger. This game was put in by Vxxy, so needless to say he was pretty excited to see me try it out. I had never even heard of this game before this whole shuffle. I then found out that this game is pretty popular and has a high reputation of being a great game. Juice told me a little about it, but left it most to mystery so I could find out for myself. I went into the game knowing I would have a party of players to fight with and it would kind of be a turn base fighting game. I was getting pretty excited to try this out. It seemed like it would be right up my alley of something I would want to spend a lot of time playing. Which was good because I needed something new to keep me busy since I am still recovering.

With some insisting on Juices' part, I decided I would stream my gameplay and let everyone know what I thought of it first hand. I set up my twitch account ready to play. Juice helped with the techy parts and we got the ball rolling. People recommended I play the Super Nintendo verision.

I got going. Everything seemed fine. I named my bestfriend JuIc3, which at the time I didn't realize was a girl but that isn't important. The controls were simple enough. I went out exploring, went to the town fair and talked to everyone. I was optimistic about the game. I beat the singing robot thing and it seemed like it would be a simple game. He seemed to wait for my attacks and I could fully process my decision making. Then Zabby my blonde lady friend got caught in time. So I went after her. I went into the forest and the first thing that really frustrated me was having to fight the same bad guys all the time. I would get to a new load or something and then would go back and have to fight the exact same people. I was also beginning to realize that the bad guys were not waiting for me to decide my attack before they attacked me. It was very overwhelming to having to think quicker and make a decision about what move I wanted to make.

I made it to the castle/church thing and it seemed the enemies were just attacking me that much faster. I was getting very frustrated. This was not the type of game I wanted to play at all. I even at the beginning of the game I picked wait instead of active. I thought that meant they would wait for me before they attacked. I kept getting stuck or caught by the same bad guys over and over again even though I would have just cleared the room.

So after playing for over an hour and feeling like I made any progress in the game, my overall thoughts of the game - I really didn't like it at all. I just didn't like it. It was maddingly frustrating. I couldn't master the controls. You fight the same bad guys over and over. I gave it an honest mans try but I am sorry not sorry to say that I won't be playing again anytime soon or ever. Maybe I will try a newer verision where the game waits for me to make my move before an enemy just attacks me. I will just stick to playing Persona 4 Golden for now.

I know I will probably get a lot of backlash for saying I don't like this game, but I tried it. I really did. I am not just saying I didn't like it without any real experience with it. You can't expect everyone to like every single game that you like. So I am sorry that I don't like/love or enjoyed this game. I don't hate on anyone who does. Just giving my opinion of my experience.