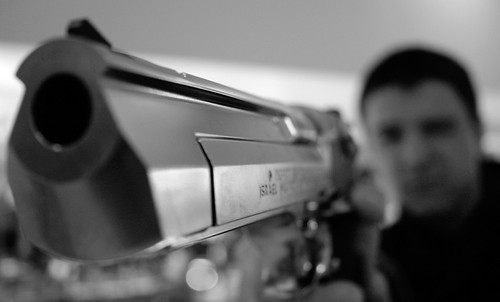 The Desert Eagle was originally designed by Bernard C. White of Magnum Research, who filed a patent on a mechanism for a gas-actuated pistol in January of 1983[1]. This established the basic layout of the Desert Eagle. It consisted of a gas-operated mechanism normally found in rifles, as opposed to the short recoil or blow-back designs most commonly seen in semi-automatic pistols. A second patent was filed in December of 1985, after the basic design had been refined by IMI for production, and this is the form that went into production[2]. From a functional perspective, the Desert Eagle is more like a typical rifle than a pistol. The Desert Eagle's rotating bolt strongly resembles that of the M16 series of rifles, while the fixed gas cylinder/moving piston resemble those of the Ruger Mini-14 carbine (the original patent used a captive piston similar to the M14 rifle). The advantage of the gas-operation is that it allows the use of far more powerful cartridges than traditional semi-automatic pistol designs, and it allows the Desert Eagle to compete in an area that had previously been dominated by magnum revolvers.

You're probably wondering what's up with the history lesson about the Desert Eagle. That's easy. I wanted all of you who enter Call of Duty 4 with me tonight, to have an intimate knowledge of this sexy weapon. The weapon that's gonna blow your head off if we are to spar against each other. I just recently received it ( I know..I'm slow ) but that doesn't negate the fact that I will shoot you down like the dog you are if you cross my path.

Onto the festivities! I love Fridays just because of Friday Night Fights.I'm old enough that the end of the week doesn't signify anything special anymore aside from the online fisticuffs that I share with my PS3 brethren. It's time to get it on!!

I've been receiving a lot of PM from new people in Destructoid about joining our soiree tonight and I gotta tell you..It just warms my heart. *wipes a tear* For the new fish..Uhh I mean new valued members of Destructoid just leave your PSN Tag and we will add you to our friends list. I did a bit of cleaning up on my list this week so open slots I do have for people who want to get their games on in a consistent basis.

Oh, and one more thing. After the FNF festivities Shipero, Takeshi, and I will be doing an unofficial Video Cast on on our PS3s. Got the new PS EYE?? Well I have THREE slots open, PM me if your interested in seeing how rugged and Epic my beard is on video. We will of course talk of all things and show you games in our collection that will make you envious, jealous and wish you were us. We might even gossip about other members of Dtoid..*gasp*

The Unreal Tournament Festivities will be starting at 8pm EST and will be hosted by none other than our own residential psychopath: Mr Sadistic. Just look for his name and follow hin into his game on Unreal. Be wary though..there's a reason why his name is Sadistic.

FOR THOSE THAT HAVEN"T SEEN THE NEW CHARACTER SKIN: SAMUS FROM METROID DO SO HERE AS WELL AS DOWNLOAD IT FOR FREE.

Call Of Duty 4 will begin at 9:30pm EST and will be hosted by yours truly Dtoid's own y0j1mb0. Tonight we fight as a team. I need some soldiers to represent Destructoid. Let's take the pain to them and rank up together.

After we finish with COD4 Warhawk will be on the menu @ about 11pm EST..Password TOID..as usual. Hosted by Shipero. I'm hoping we have an open server for a clan match..I leave that to Shipero..as well as attendance.

Shipero doesn't partake in COD4 because of these delusions of being in a ROCK BAND. Samit will be there as well. Maxvest..they're looking for you to join tonight as well. Maybe you can join him and show him how it's done. Or maybe some BURNOUT PARADISE? He thinks he's Steve McQueen too. Damn Shipero and his silly delusions.

For those who don't own COD4 or the others don't fret as the UT3 game hosted by Sadistic will be going on until at least 10pm EST or until you get demoralized by Sadistic and quit.

RAINBOW SIX VEGAS 2 is still waiting to be rolled out for it's official debut for all you Mercs out there, all we're waiting for is that patch coming soon before we get our Breaching on. Still too many hiccups online..but when they patch..it's gonna be perfect. And ON.

One last thing.. since I have a Desert Eagle Theme going, I might as well add this too.


Bring it gents. Hope to see the lot of you there so I can bust a cap in your face. Try not to bring a replica to our fights!! Leave that PSN Tag below and let me know something.
#Community
Login to vote this up!