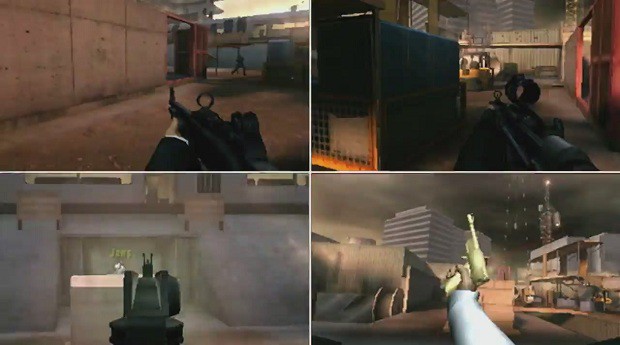 Speaking of nostalgia, Activision's rewrite of the N64 classic GoldenEye felt both trapped and inspired by it. The four-player splitscreen mode was available to play on a single television hidden away behind Nintendo's flagship titles, but even then wasn't attracting a huge amount of attention. The use of the title is understandable from a business perspective: for multiplatform games, the Wii version rarely sells even half the numbers of its HD brothers, with the console's graphical weaknesses and reputation among devoted gamers putting it at a severe disadvantage. To that end, being both an exclusive and bearing a name that instantly recalls some of the Nintendo fanbase's happiest memories in the FPS genre would in theory clear those problems from the board. Except that when it comes to actually making the game, there's a whole host of expectations and obligations to which the developers will inevitably be expected to defer. On the face of it, developers Eurocom have maintained their balance respectably. In a time when splitscreen multiplayer has been largely left behind in favour of online, there has been a strong marketing focus on this, like its inspiration, being the game to get friends back together on the sofa ('GoldenEye is back. Get your friends.' states the trailer tagline). Yet once you start playing the thing, a split-personality emerges that can't quite bring together its desire to appeal to modern shooter fans with its responsibilities to maintain a certain degree of faithfulness to the GoldenEye name. That's not to say it's bad: if anything, just lacking confidence. The basic gameplay style is draws heavily on Call of Duty, with iron-sights aiming, weapon load-outs (the invented gun names, unlike the original bearing no similarity to their real-world equivalents, are confusing here) and limited health. Yet in visual design, its chunky character models, cubic buildings and limited texturing seem deliberately chosen to evoke the spirit of the N64 game – and yes, to you snarky naysayers, even when undermined by a particularly terrible television that made everything too dark and lightly pixellated, the game does look respectable on a technical level. The two maps I played, Outpost (based on the Surface/Siberia mission) and Docks (all new and self-explanatory, although strangely lacking any sign of water), both featured big buildings and open spaces, allowing for a mix of sniping or close-range play styles without demanding a speciality in either. Somehow, that need to compromise felt appropriate. Being unoriginal isn't such a crutch for an FPS on the Wii as it would be for other consoles, where entries in the genre are more populous, but given how inventive the N64 game was, it's a shame that Eurocom haven't been more proactive in taking advantage of the opportunities to really make their game stand out. Why does only Oddjob have a signature move, for example? Couldn't Scaramanga start with the Golden Gun (a single-hit kill, but hampered by needing to reload after every shot), Baron Samedi have double health or Rosa Klebb a fatal shoe-dagger melée kill? The game delivers a perfectly solid multiplayer experience – although it was as if I had entered bizarro world, controlling a PlayStation shooter (SOCOM 4) with a motion controller while having to endure twin analogues on the Wii – but still feels slightly like an assembly of slightly ill-fitting parts. I'm still looking forward to playing the full game and intend to buy it on release, yet for my enjoyable experience with Eurocom's GoldenEye, my pervading impression was that somebody had already done it better.
________________________________________________________________________________

That concludes my coverage of the 2010 Eurogamer Expo. Many thanks to everyone who read and commented over these past four days, I hope you found something useful on the games you were interested in. My personal favourite games of the show were Vanquish, Assassin's Creed Brotherhood and Donkey Kong Country Returns (with Gears of War 3 and the Move compatible SOCOM 4 also leaving very positive impressions), in no particular order. On Sunday I'll be returning to the weekly blogging format with a review of Dead Rising 2.
#Community
Login to vote this up!