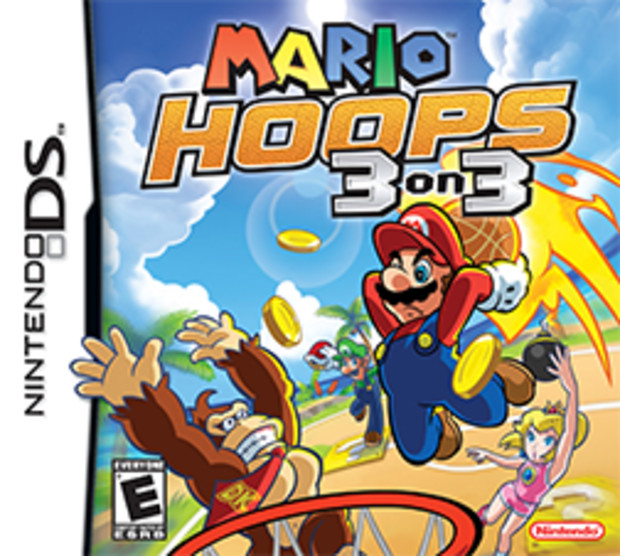 Before all that, let me tell you what the heck this game even is.
Mario hoops 3 on 3 is a Mario kart style basketball game where you can use items, special shots (more on this later) and dunks with your favorite Mario characters in full 3d courts modeled after locations in the main series. Ever wanted to see Bowser take on his son in a game of basket ball then this is your game.

Mario hoops gameplay is a cross between NBA Street and Mario kart in a good way. As you dribble your ball across the court avoiding computer controlled opponents and scoring the shot or dunk how this is handled is pretty well as you can duke it out in 16 courts all well rendered that might make you think you were playing a gamecube as the 3d was handled well as seen by this crappy phone video made by me.


Like regular basketball you have 2 periods and a set amount of time for each only unlike the regular game you can score 40 points in 1 shot if you pull it off correctly which is where the special shots come in.

Every one of the 21 characters has their own unique dunk/shot called a special shot which never misses and is completely awesome. Only problem is that you can use them over and over again in one game which kind of make you want to continue to do so just to get past the games 4 modes.

Challenges: basically just a training mode and something to teach you everyone’s special shots.
Tourney: the grand prix of this game mode chose your team of 3 and take on others in an 8 team tournament on 4 different court collections.

Exhibition: Same as in any sport game make a team chose a arena and play.

As you can see not much here to choose from which is a disappointment due to the fact that the gameplay is actually pretty good.

Technical – Waluigi
Daisy
Peach
White mage
The bad thing is that most of the character in the same group feel the same take daisy and peach for example as they a basically just reskins of one another in my opinion.

Playability
The game itself has pretty good controls allowing you to shoot, dunk and own your opponent with ease due to the some what easy difficulty even on cpu level 6 tough.
You tap the touch screen to dribble and tap it faster to dribble faster, you draw a line up to shoot and dunk (If you are running towards the goal) and you tap the screen at certain points in a certain order to activate your special shot (such as tapping in a M shape twice for Mario and Moogle)
The game also features button controls dubbed “help buttons” which are flawed due to the fact that you can’t dribble in different directions nor do you special shot.

Sound
Final fantasy sound editor Masayoshi Soken composed the music for this game and I can say that he did a fantastic job on the music as it fits the game nicely with a different theme for every court. Awesome is the only thing I can really say about it no harm here.
The grunts and such that the characters make are also nice additions as some even say catchphrases like Mario’s “here we go!”

THE VERDICT
My score
7/10
A Mario hoop 3 on 3 is a great game lacking in content. With only 3 modes to play by yourself (one of which is practice) the games used asking price of about 30 buck is something I would wait for a price drop on and have a friend that also has the game too as after you beat everything you have nothing else to do besides replay expedition or try to gold cup every tourney.


not many images but better than my last
#Community
Login to vote this up!