If they are not going to do these things, I get the sense they're just talking about an ideal they heard on TV, not the actual journalism I know. Most of the jargon i just threw down would would be talked about in the first two weeks of Journalism 101. It is this early you learn there are processes, formatting and structure. 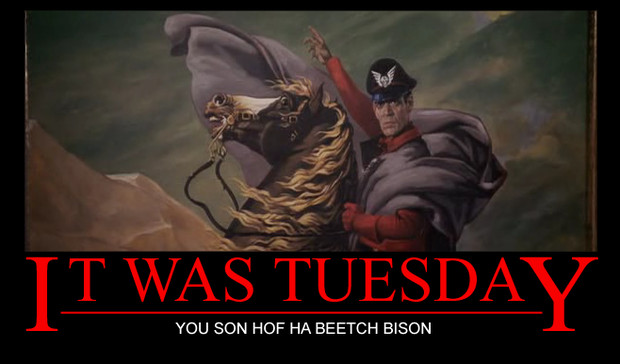 So what? I slept through 4.0s in California. �A 3.0 is a normal day, not big news. At best, a paper in CA would point and laugh at North Carolina for making a big deal over it in an editorial page funny.

Ah, yes, the editorial page. That's usually the last two pages of the front section, and appropriately placed because this is where the hard news ends and the soft news begins. The editorial page is home to opinions on the events of the day, but sometimes there's also room for a little satire and humor in there to lighten the mood.

Anyway, so this is where the hard news ends - at least mostly.

Soft news is like Schrodinger's cat. Either it's hard news or its not, but either way it's not front page material. These additional sections of a paper are where the rest of the news sometimes lets its hair down and puts on some clothes that breathe better. Soft news is also the domain of feature writing. There could be a cat in a box writing an AP-style news story about the NFL draft or it could be writing about its interview with Zoe Saldana and how lovely she is when she is not green.�

Its possible the cat could be writing about the lack of yarn-based games in the gaming industry and why it thinks there should be more of them. It could describe its love for Kirby's Epic Yarn and how much its looking foward to Yoshi's Wooly World. This would fall in the Entertainment section or, in our case, a gaming website.

Rage all you like about those Yarn Justice Wuvvers, but this is indeed where it belongs.

Sports, Local News, Business, Entertainment - all of this is soft news, but even these sections are scaled for the sake of importance and regional interests. With the space alloted based on the ad revenue given, a newspaper may have to make some cuts today for stories they could plausibly just save for tomorrow or another day. Or perhaps that editorial can wait a couple days as events unfold, then be revised to feel up-to-date.

There is also the matter of taste to consider. Is the story going to invite and attract readers or drive them away? Do we go with the US Senator caught in a sex scandal or do we expose the girl that slept her way into mangement at the local Hooters? Both people did something bad, but who is going to answer to more people? One feels right to be upset about as it may affect me as a voter, but the other feels more like I'm just picking on someone I wouldn't know anything about otherwise.

Are you seeing what I'm getting at here? If everything was treated as hard news, how would these stories be prioritized? They need to be scaled by importance or the content would become far more difficult to organize and eventually become dull to the reader. There's a need for a divide and variety.

The front page and section are geared toward being straightforward, just the facts, the "Who, What, When, Where, Why and How" of current events. It wants to give you the most information in the least amount of time so you can move on to reading about the other things that catch your interest.

Since gaming falls under Entertainment and the content is so vast during the week, the content here also has to be prioritized in similar ways. It can't all be hard news because that would be regurgitating a press release and calling it a day.

And as I said at the start, soft news is wibbly-wobbly, so gaming and entertainment news are much more subjective. You'd be there all day trying to find a conflict of interest when it might be easier to catch a politician. If the wording doesn't show bias, there is no evidence of favor it and no there are no beneficiaries its just not worth the time or energy to suss out because there are bigger fish to fry.

Some blogger getting a pack of Doritos and Mountain Dew with a review copy of Halo Master Chief Collection? I... kinda doubt that's corruption. That guy just saved a few bucks on snacks and maybe MS thought that would be a nice gesture. Remember, there's still the Halo 3 and 4 multiplayer in there, which is probably worthy of docking a couple points on its own.

If the reviewer got, like, a date with Zoe Saldana, Jennifer Lawrence and a tub full of Jell-O for them to wrestle in along with a copy of Halo 5: Guardians? Maybe we can can talk corruption then.�

Game newsblogging isn't exactly a glamorus job, though. The pay ranges from full time salary with questionable job securiity to part-timers not getting paid enough to put the Meow Mix in the bowl. Some have a second, more sustainable job to go with the newsblogging thing. Additionally, if they wish to continue in journalism of any kind, taking an offer like the one I just described would be very damaging to their potential careers. Its probably not worth the risk - but it would be a hell of a way to go out.

So let's suppose there was a kitten that made games from twine and offered her catnip to like five different cats so they'd like her and her game. Surely this constitute games industry corruption!�

First, the question here is first how you got this information and who the sources are. Sources, their credibility and emotional/mental stability are important. So is the magnitude of the people involved. They might be doing bad thing, but again, the scale matters.

Also, what did you feel was the most important information from the start? Four of these cats seem ancillery to this story and that's the cacophony this scandal rode in on here to get attention. Also, there's really only one guy with the potential for corruption in journalism.�

And really, what does Taco Bell have to do with them? Why are people applying a fast food brand to this story?

Additionally, what was the intent of getting this information out there? What was that? You're worried about the Yarn Justice Wuvvers taking over the industry? Exposing the kitten? Saving games journalism? To stop her from ruining kittenism for kittens? You're going to have to make up your minds here and pick one.�

Do you even know how to journalism?

Actually, don't answer that. I think we're done here. No, I don't think Yoshi's Wooly World is going to lead to an industry-wide yarn-based graphics crusade overnight. I think there will still be realistic military shooters and a safe space for grumpy cats in games.

Yes, twine is yarn, I don't think coincidence is evidence but by all means, keep rocking that aluminum foil hoodie.

What? You fear this will lead to Dragon Age: inquistion becoming Yarnquisition and you can hear David Gaider knitting plushies of Alistair and Morrigan right now? Uh, good for him. He can do what he wants. I might buy plushies like that. If it makes me a YJW, so be it.�

Now, if you've made it all the way down here, congrats, you have made it through the information and satire to arrive at an understanding of the scale at which news is presented and prioritized. A kitten with a twine game caught up in an internet witch hunt isn't going to rank as front page news or even backpage news in other sections of a paper.

For a Taco Bell catnip scandal to even rank and be taken seriously it's going to have to be done tastefully with pure fact because it's pulling attention away from the discussion of the medium. The conflicting voices tell me they want to help the medium and journalism, yet the story and content were questionable from the start and presented in the poorest taste. That is not journalism.

This is kind of poo that lines the supermarket checkout where its forced to compete with candy bars and beef jerky. The ones that grab the beef jerky made the better call, though I'd probably go for a Kit-Kat myself.�

If you want to fight for something people would choose �a Slim Jim over, you go right ahead.
Login to vote this up!