8:12 PM on 12.30.2012 (server time)    0
So it's been a while since I've done one of these but it seems my stupidity has only grown since the last time I did this. Which can only be a good thing (or bad, depending on your point of view), since I have all these built up ideas to share with you all! Or maybe I just need to poop? Still haven't figured out the two yet. Well this one is gonna be bit different, I mean it's still going to be a cluster fuck of unfathomable proportions, but instead of the past week or two it's gonna be my favorite things of the past year.

Ready? No, your not ready but I just thought I'd do the polite thing and prepare you for the inevitable. Boot up, Strap in and get you kids to the shelter, because here we go. . . 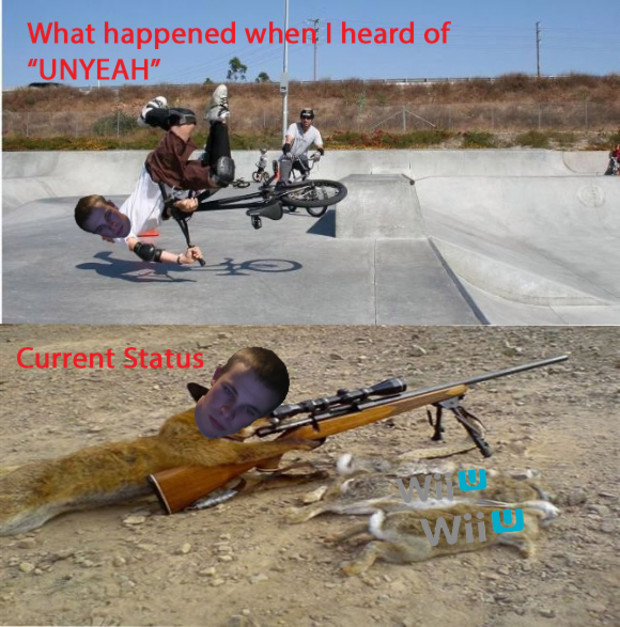 Nintendo, here's a word of advice: when a large part of your demographic isn't old enough to watch spongebob yet, teaching them a non-existent word that the 90's would be ashamed of is a VERY bad idea. Know what's an even worse idea Nintendo? Making me fall off my bike. Yea done goofed son. Yea done goofed. ESPECIALLY JUST BEFORE THE CHRISTMAS MONTH!

Well it's been one hell of a year guys and a damn crazy eventful one at that. seeings as it's the 31st and all I might as well get this out of the way: This was the year I took to Destructoid like a fly to takes to a fresh doody. . . basically what I mean is this is the first site I have ever taken an active interest in. Hell at the beginning of the year I was doing one of these blogs a week I was that invested with you guys.

From the Ten-boners-A-Minuet Community manager that is Mr.Andy Dixon to the Poetic Insanity that is Occams Electric Toothbrush, one thing unlike any other site I have ever been to was evident: This is a community to it's foundations. I'd damn well go as far to say a family, with the cooky uncles and the crazy aunts.

From here on out I'm hoping to be even more involved. Blogs more regularly, commenting and FNF. Because as crazy (or creepy I suppose) as this may sound. . . this is my kind of family.

Stay safe dudes, and have a great new year.

Tom.
#ShareonCommunityBlogs
Login to vote this up!