In 2011, AlexMD made an interesting post on VFDC compiling the franchise’s involvement in pop culture. It was resurfaced once again due to Akira’s appearance in Super Smash Bros. Ultimate as an Assist Trophy.

Virtua Fighter has been referenced several times in pop cultures, such as video games, television, film, anime, music, and more. Some of the references can be subtle, while others are out there in plain existence. And my god, there are a lot of pop culture references pertaining to the series.

Here the thing: I won’t list every single reference since the article has a lot of them, but I will name some key ones and others that you never knew about. I’m going to try to keep it short as possible to avoid problems in regards to posting blogs like these because I tend to add too many videos and pics. I seem to run into those problems a lot.

Let’s get started, shall we?

Ghost in the Shell

This one is not on the article, but I decided to add it since it is recent. Yes, there is a VF reference in the 1995 anime movie, Ghost in the Shell. And here’s the thing: not only that it was a reference, but it was also a huge influence that gave us an iconic scene that we all know and love to this day.

In an excerpt from the book Ghost in the Shell Readme: 1995-2017 by Shirow Masamune, he had a roundtable discussion with Kazuchika Kise (director of Arise and The New Movie [not the 2017 live-action movie with Scarlett Johansson]) and Mamoru Ishii (director of Ghost in the Shell and Innocence). Kise and Ishii mentioned that they spent a lot of time playing VF2 in the arcades during the development of Ghost. Oshii quotes “When people ask about Ghost, I actually think of VF2”. 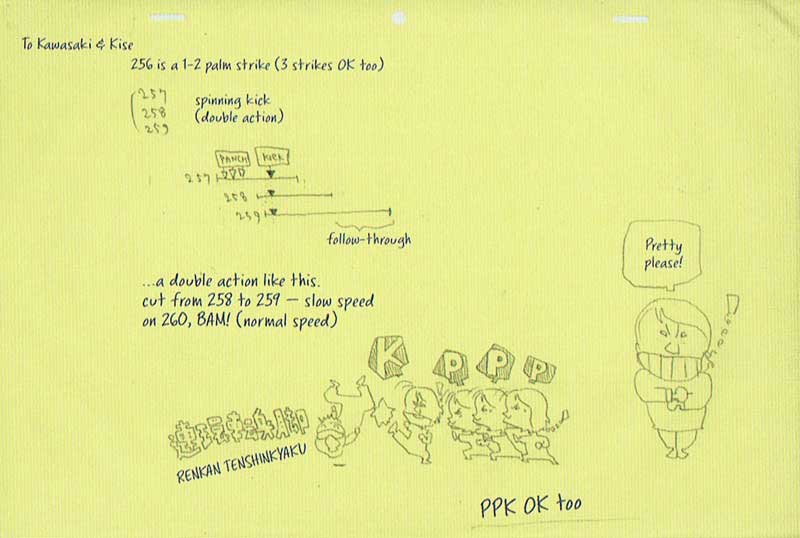 This led to Motoko Kusanagi using Lau’s Renkan Tenshinkyaku (PPPK) in the Water Fight scene. Kise oversaw the animation, while Hirotsugu Kawasaki did the keyframes. Here’s the clip for reference. (EDIT: Myke from VFDC was the one who made that article. Click here to read more of the story.)

Ben-To has four episodes dedicated to Virtua Fighter references, mainly from VF2 and the Sega Saturn.

Episode 3 has the protagonist, You Satou, talks about how he admired Shinjuku Jacky and BunBunMaru. These two players are the Tetsujin VF players that began their roots on VF2. I mentioned them several times on past blogs. It’s cool to see the tournament scene mentioned on the anime, let alone have some footage from their matches. At the end of the episode after finding an easy way to achieve half-price bento, it left him unsatisfied because like VF, “The stronger the opponent, the better it is”.

Episode 4 had more VF2 action where Satou was playing VF2 with his first-cousin, Shaga, who kept flirting on him. Sato mains Jacky, while Shaga mains Akira. More SEGA titles were mentioned, and it was known that his father is also an avid SEGA gamer.

Episode 8 has a lot more VF2 action than Episode 4. Yaizuri, who is the president of the Half-Priced Food Lovers Club and also “Ice Witch”, is considered to be the strongest Ben-to player of all. Yaizuri lost to Shaga’s Lion, Asebi’s Shun-Di, and Satou due to Perfects, making her FREE as hell. She used Akira in her match against Shaga, Jeffry against Asebi, and Pai against Satou.

After losing to Satou, Yaizuri drops his Saturn out the window, in which he screams “MY SATURN!!!” and jumped out the window. He went to a hospital and he kept the Saturn with him at all times. He even wrote a poem to it in which it reads:

Episode 9 has some feels to it. Satou gets knocked down by the Student Council President, Shiraume for no reason to him. It was revealed that she is in love with Oshiroi, a girl who is in the Half-Priced Food Lovers Club with Satou, and likes him in an odd way since she writes a lot of Yaoi fanfictions involving him.

He is seen playing VF2 in which he uses Jacky to beat up the CPU using Sarah in a very angry and vocal way. He stopped playing when Asebi brought him lunch, only to realize that it was a deconstructed meal. Filled with confusion and on the verge of passing out trying to understand the food he ate, you could see the CPU Jacky losing to CPU Sarah in a match. He fades away to Sarah saying “Even good guys blow it”.

Seriously, watch the anime. I heard it was pretty good, and it was done by David Production, the same studio that is responsible for the JoJo’s Bizarre Adventure series and Hyperdimension Neptunia. 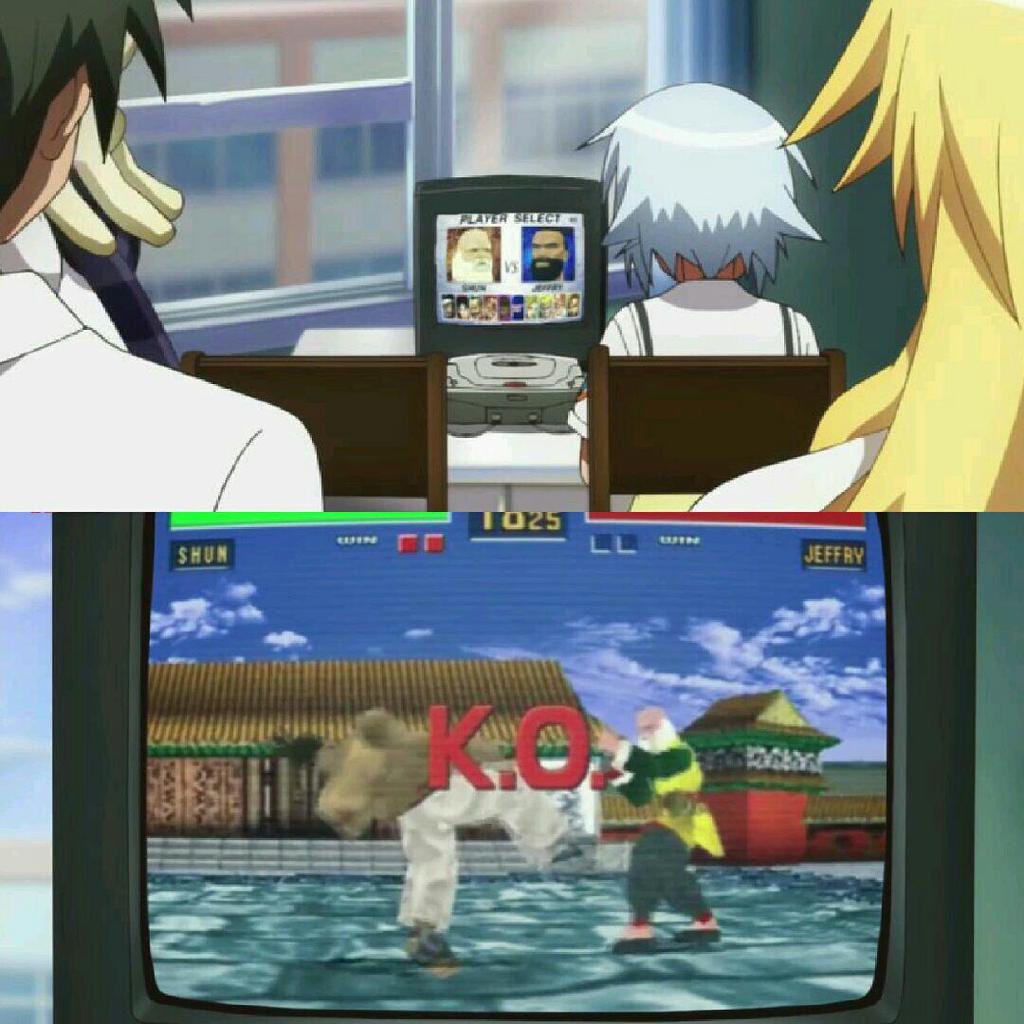 This is something that you probably already know. Bayonetta can perform Akira’s Tetsuzankou (466P+K) as her attack. She even uses his quote, “Juunen Hayaindayo!” which translate as “You’re 10 years too early!”.

Well since Bayonetta and Akira are both in Smash, at least he’ll teach her how to do a PROPER Tetsuzankou.

Remember the 2008 film, The Forbidden Kingdom, with Jackie Chan and Jet Li? In the movie, Jason mentions one of the moves that was used in Virtua Fighter 2, which is the Buddha Palm. Here’s a fatal flaw with that reference: no one in VF2 used that move except for Lei-Fei. He didn’t make an appearance until VF4 and didn’t use Buddha’s Palm until VF5.

X-Files had a scene on Season 3 Episode 3 where Mulder and Scully investigate a series of lightning-related deaths in a small town. Mulder finds the murder suspect’s high scores as DPO on the VF2 arcade machine.

Lastly, Air Master has three VF references. Episode 1 has Michiru and Yuu playing VF using Pai and Sarah respectively, with Yuu imitating Sarah’s win pose after defeating Michiru. Episode 17 shows AirMaster (Maki) defeating a high ranked fighter of the Fukumichi Ranking. As soon as she was about to step off with her friends, she is challenged by another player who wears the same gear as Akira.

Episode 18 is an important one since AirMaster got knocked out in the previous episode. How she was knocked out is explained here since the Akira player used 66P into the Dragon Lance Combo (or DLC for short, which is 3K+GP466P). Michiru and Yuu would enter the VF tournament in this episode alongside with Maki, and all three girls would dominate for the most part until someone in the tournament was bodying everyone. Maki also notices the DLC that was hit to her in the game.

The tournament winner explains how his character Akira (or Akio in the anime) is his master and showed him the moves he needed to win.

I can’t list them all, but there’s a lot of VF references made in that article, from Trish using Sarah’s quote in Ultimate Marvel vs. Capcom 3, to Jim Steele becoming the real-life Wolf Hawkfield in AJPW. If you want to read the blog on the real Wolf Hawkfield that I made last year during VF month, then click here.

VF’s impact on pop culture transcends beyond the games, and it shows. It is quite popular among anime and appeared in other forms of medium.

That’s it for this blog. Join us next time on Virtua Fighter month as we talk about how Virtua Fighter 4 Evolution’s training mode set a new standard for the fighting game genre.