The Fall of Metal Gear Solid 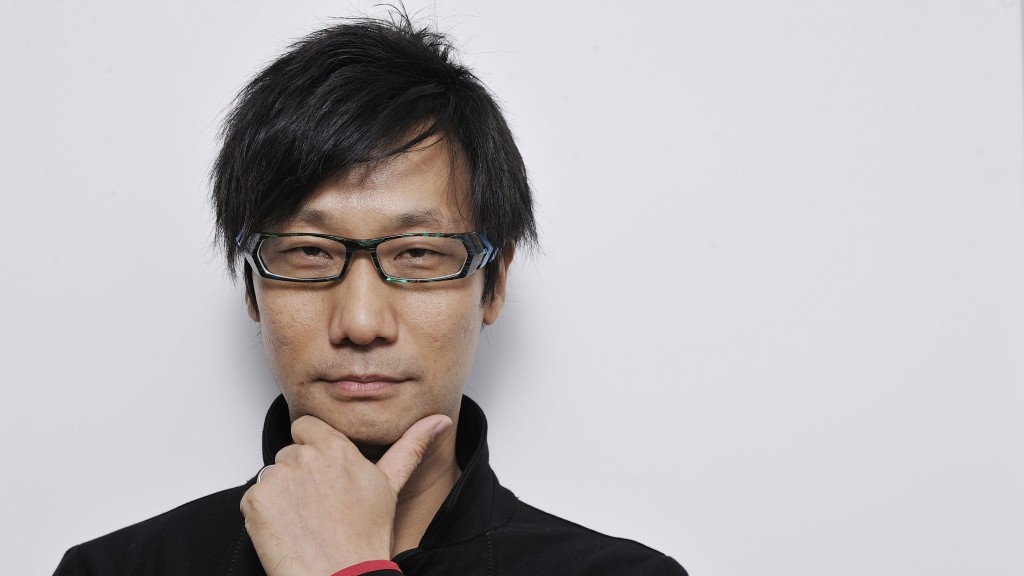 When I was 14 years old, I returned home from my local Blockbuster store with Metal Gear Solid and was completely blown away. As a kid I loved the original Metal Gear on NES, but this new one was just un-fucking-believable. It was like playing the coolest spy thriller movie ever, complete with intense action, bad ass music, and the best voice acting I'd heard outside of a Disney movie. I beat the game within the 3-day rental period and declared it one of the finest bits of entertainment I'd ever experienced.

Jump ahead four years. I finally got my hands on Metal Gear Solid 2: Sons of Liberty and couldn't wait to see how creator Hideo Kojima would follow up one of my all-time favorite games.

… It wasn't good: A haunted arm implant. An immortal vampire surviving gunshots to the head. Some fat guy on rollerblades. Raiden and Rosemary.

What the fuck am I playing? What happened?

I was so confused. Sure, the gameplay sections were as fun as ever, but the storyline elements- which comprised almost half of the total experience- were completely fucking absurd. The first MGS game had some wacky shit, but this one was taking it to a whole new level. The writing was embarrassing; the cut scenes turned the entire story arc into a big, eccentric joke. By the end, I was completely embittered by the direction Kojima had taken the series.

My time with Metal Gear Solid 3 was depressingly similar. There was too much kooky, obnoxious bullshit ruining the awesome core gameplay. For example, the battle with The End was cleverly designed and appropriately intense...

… But why the fuck are his eyeballs popping out like that?

… Why does he have a living, color-changing plant suit and a parrot that helps spot his enemies?

… WHY THE FUCK IS OCELOT MEOWING?!? 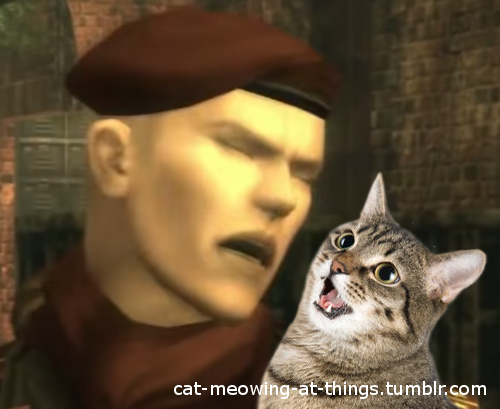 None of it made any goddamned sense. How did this Kojima guy expect me to take all the drama seriously when there is a dude that controls bees, for fuck's sake? These games that relied so heavily on the story, dialogue, and presentation were filled with so much asinine nonsense. MGS fans somehow think this kind of bizarre shit makes the series more endearing and entertaining, but for me it was too stupid to enjoy, too pervasive to ignore.

In a fit of madness, I played through the entirety of Hideo Kojima’s proudest, most ridiculous experience. During one of those 20-minute jackass cut scenes, I was heating up corn dogs in another room and had a moment of clarity: the fewer limitations that were in Kojima's way, the more opportunities he had to strangle the player with his inane, overindulgent writing. He was the George Lucas of video games, in that he created something amazing while working through technological restrictions, and then ruined it when those restrictions fell away. As console hardware became more powerful and disc space more available, the doors were open for his imagination to get carried away and expose his lack of brevity, subtlety, and tact. With larger development budgets and expectations, Kojima went wild and wrote himself into circles that undermined the essence of his previous successes- he did less with more.

Take for instance the 'romance' story between Meryl and Johnny (a character who suffers from diarrhea, because Kojima thinks that is funny), which reaches its pathetic climax during an overblown gunfight with an army of elite soldiers. In one uninterrupted cut scene, Johnny proposes to Meryl and is denied, asks to move in together and is denied, then Meryl proposes to Johnny and they discuss wedding details- all while suffering multiple gunshots in a critical shootout against an overwhelming force.

Meanwhile, I’m watching this all with the controller hanging useless in my hands, thinking about lighting myself on fire. I’m sorry Kojima fans, but that was the dumbest fucking thing I’ve ever seen. Your favorite developer took every bit of PS3 graphics and processing power, every bit of development time and budget, and combined them with his terrible fan fiction-quality writing chops to create one of the worst love story scenes possible. And MGS4 was filled with obnoxious shit like this. 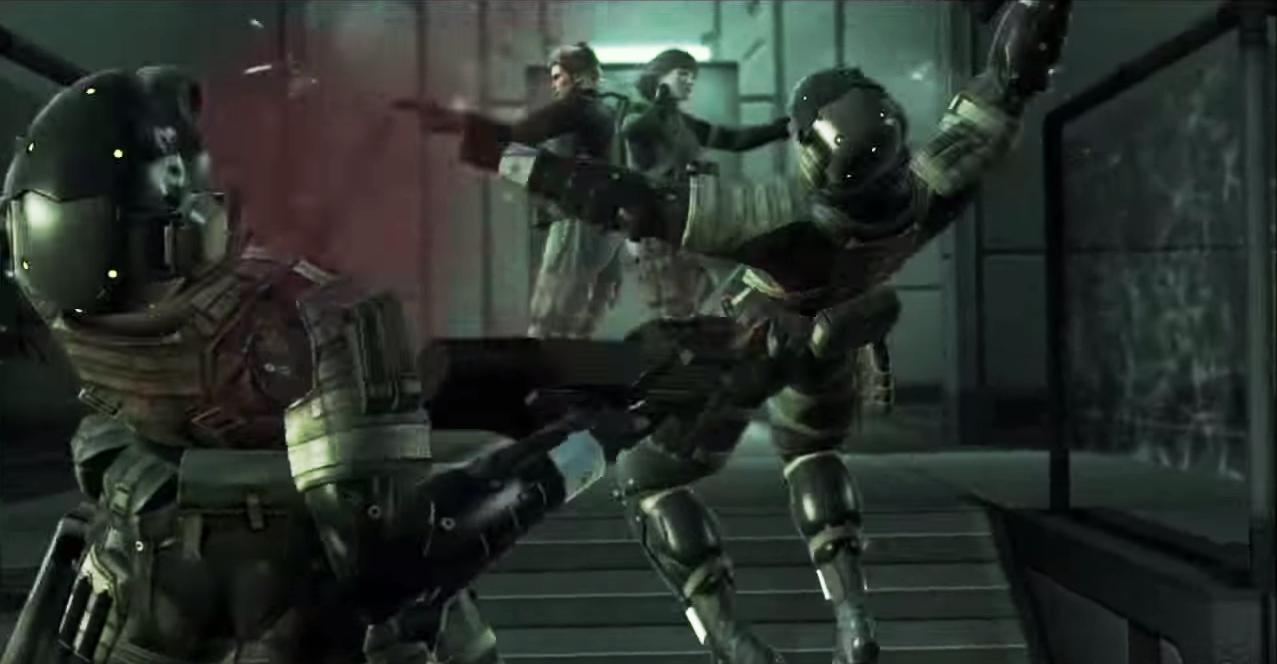 There’s a love story in there somewhere, and it sucks.

When Kojima was restrained by technology or circumstance, the results are often much more effective. Metal Gear 1 and 2 for the NES and MSX systems were nuanced games that were ahead of their time, before stealth games were commonplace. Metal Gear Solid 1 made the most of the first-generation PS1 hardware to create an innovative, cinematic experience that still stands as the apex of the series.

Kojima has shown that even today, when he is restricted, he can produce a bit of brilliance. In the Silent Hill horror demo P.T., within the constraints of a short prototype demo, Kojima helped create one of the most visceral horror experiences ever conceived. Without the freedom to pad the story out with relentless cut scenes, he instead led the player through a sensory exhibition of terror beyond what is possible in a feature film or television show.

That is in contrast of his premier Metal Gear Solid franchise, where he has lost sight of what truly makes a video game. In the Superbrothers’ Less Talk More Rock manifesto, it is explained how “… the native language of videogames: synesthetic audiovisual expressing a meaning, where sound and image and logic come together and feel right, where the communication is nonverbal but nonetheless articulate, where you understand what's going on the same way you 'get' the communication of a song, the same way you can be blown away by a painting or a piece of sculpture.” Kojima has been forced to grasp this concept in the past, but with each subsequent MGS release I feel he has lost interest in the importance of talking less.

In one example, after defeating the Raging Raven boss in MGS4, Drebin calls in and proceeds to verbally tell you her entire backstory through your Codec. Think about this for a second. In an entertainment medium as uniquely interactive and immersive as video games, Kojima decides to read hundreds of words of exposition to you over a static communicator screen. 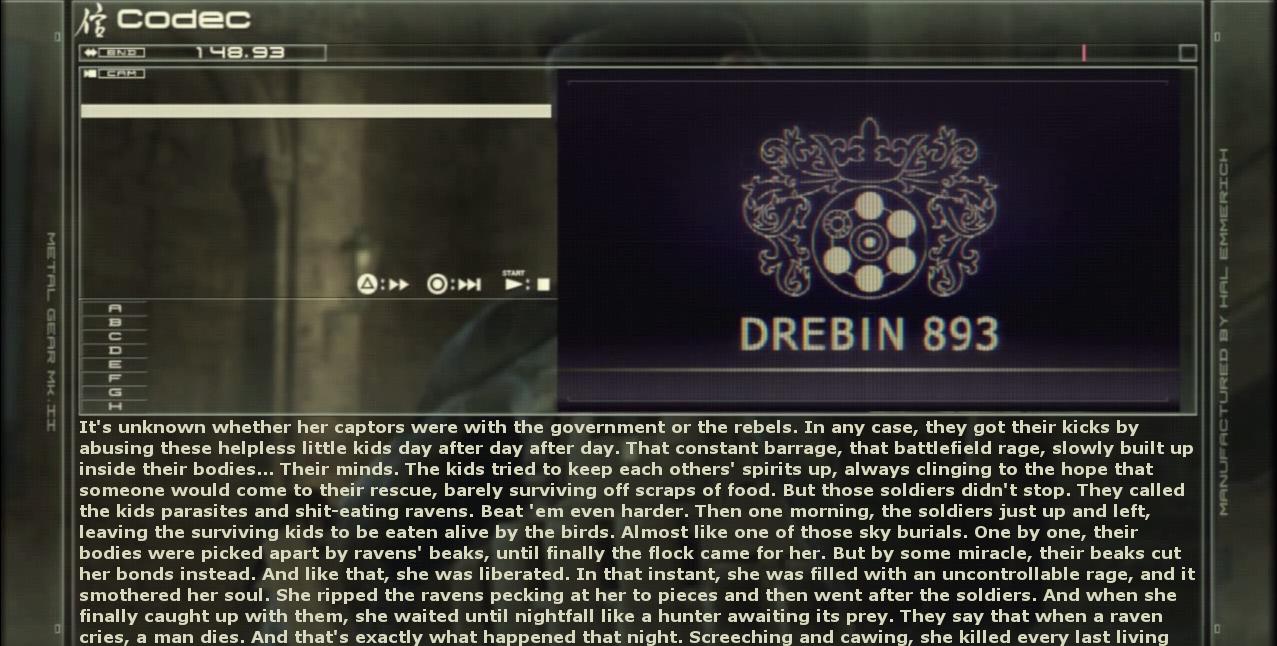 I tried, but I could not fit Drebin’s entire book report about Raging Raven on this screen.

That is not genius storytelling. That is not an example of using video games to explore exciting ways to convey a story. What that is, is a waste of my fucking time.

Compare that something like the opening moments of Journey, an absolutely wonderful game and a prime example of using the unique platform of video games as a storytelling device: you are a mysterious creature in a mysterious land, and you see a light at the top of an ominous mountain far away. You know that you need to find a way to the top of that mountain. Journey presents you more relevant information towards your understanding of the game in one instant than Hideo Kojima does in hundreds of spoken words in Metal Gear Solid 4. 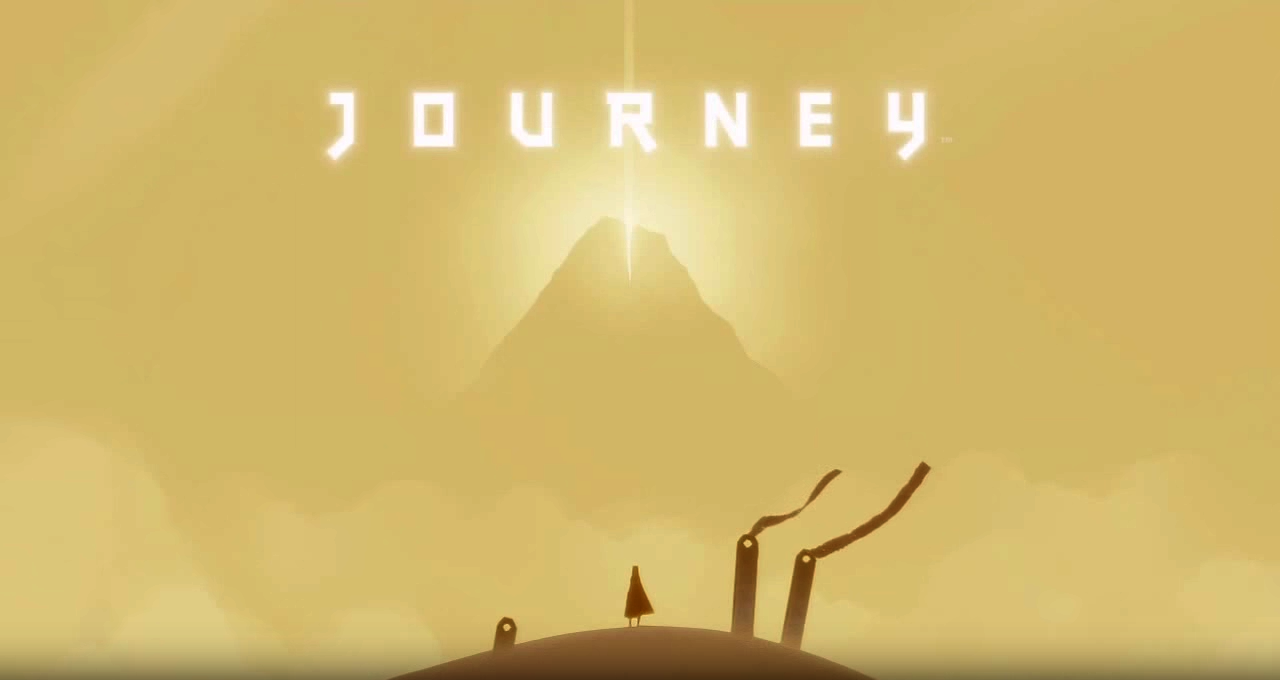 Got it. Thank you for not wasting my time.

Metal Gear Solid and Journey are two completely different types of games, but I offer this as an example of what is possible in video games when you show the player instead of telling them. Kojima consistently wastes my time telling me his stories instead of letting me experience them on my own- at least until I figure out that his story is often too ridiculous to care about and take seriously in the first place.

At least that has been my disheartening experience. Kojima and his Metal Gear Solid games have a huge fan base in the gaming world and that is fine. Metal Gear Solid V: The Phantom Pain will soon release to glowing reviews and record-breaking sales and that is also fine. I will most likely skip this one, because no video game series has disappointed me like Metal Gear Solid has. As a 14-year-old playing MGS1, I was excited to see a game touch on serious, real-world topics like nuclear warfare, the military-industrial complex, and government conspiracy framed within a thrilling action game. I looked forward to seeing the series evolve with the opportunity to examine serious themes through compelling, believable characters. Instead, those themes became merely window dressing to a playground of absurdity, juxtaposing genuinely important societal issues with a clown show driven through endless pages of cringe-inducing dialogue.

For every truly inspired gameplay and storyline element in the series like the Psycho Mantis fight (Kojima's finest work in uncanny, Fourth Wall writing and design), or the epic REX/Gray Fox/Liquid showdown, there is a mountain of insane supernatural bullshit that causes me to dismiss the value of the series entirely. Nevermind Kojima's use of 'nanomachines' as a lazy plot device crutch, or the awkward, perverted way he designs most of his female characters. What I would do for a version of Metal Gear Solid that took Kojima’s original vision and filtered it through a talented writer that could craft a more concise, effective, meaningful script. Kojima slowly made a silly, convoluted joke out of the world he carefully crafted- a world in which I saw a lot of potential to go somewhere special and important. Slowly learning that fact through each stage of disbelief, disdain, and disappointment was the worst part. 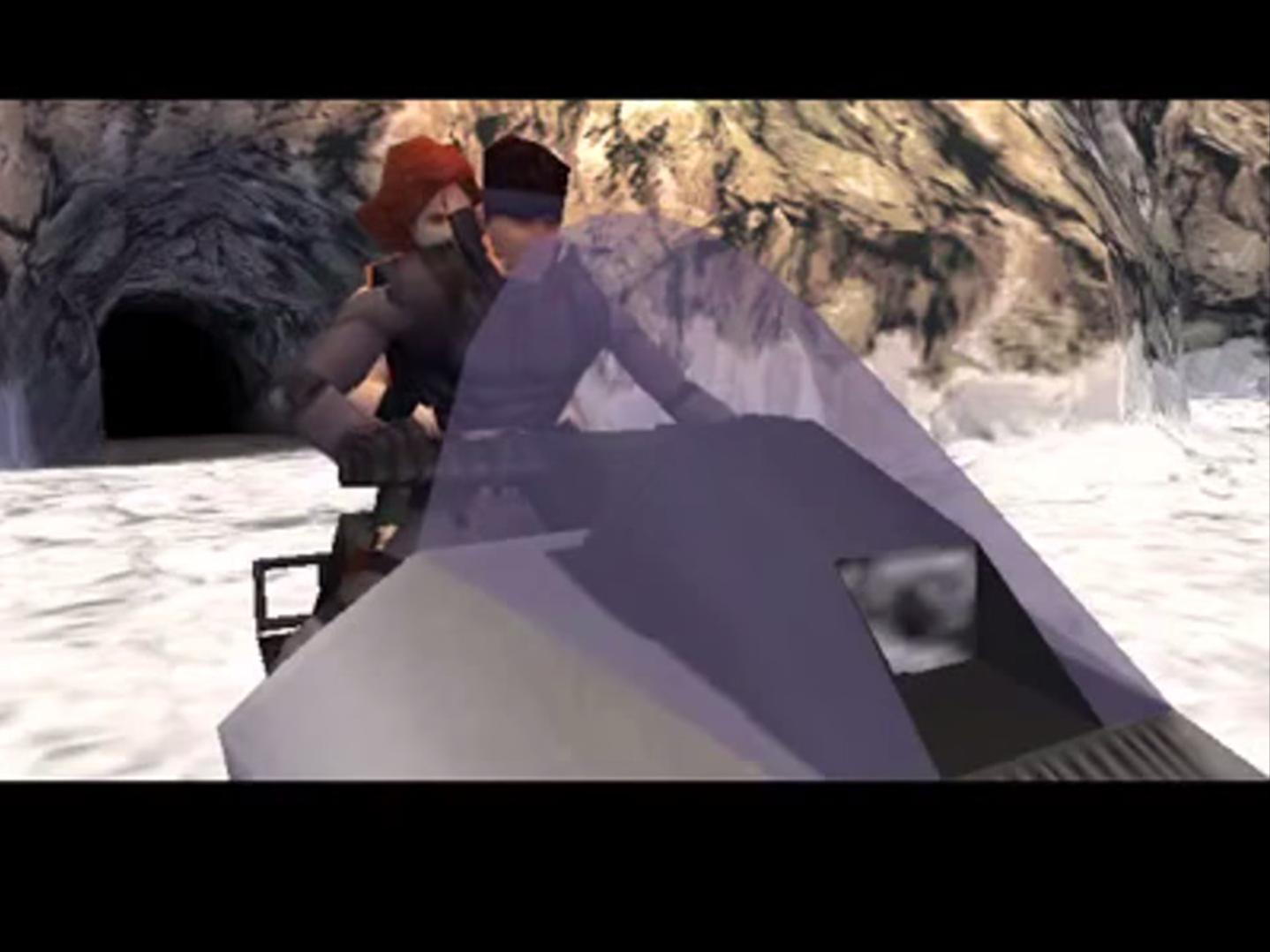 I have decided that this is the final ending to the Metal Gear Solid series in my book.

Kojima has been lauded as a revolutionary storyteller in video games, a genius that changed the medium and influenced a generation of followers. While I can agree that he has designed games in ways that were never considered before, to me it has more often been for the worse. Meow.

TL;DR – Hideo Kojima ruined Metal Gear Solid with his shitty writing and that makes me sad.