Wii U reaction, pricing, and predictions

1:25 PM on 09.14.2012 (server time)    0
I think I have written one Wii U article or mentioned it a grand total of three times since I've been writing this long text blogs that no one reads (The 2012 predictions, New Super Smash Bros, and the New Super Mario Bros Wii U).

Finally, today in my hometown in New York City while I was asleep, on September 13th we finally got the information we have all been guessing for months about Nintendo's Wii U. and all I have to say is YES. I, a Nintendo fanboy, haven't been all to excited for the Wii U; it's not that I think Microsoft and Sony are better companies and it's a given fact that both the Xbox 360 and Playstation 3 are better than the Wii, those aren't things to warrant my lack of excitement for the new system. I think it was more of the handling and the announcements Nintendo took to it's Wii U approach. Last year we saw a nice graphical demo of the Legend of Zelda (which everyone think is going to be the normal graphics even though that was obviously movie graphics) and didn't hear anything but rumors. This past year we heard a couple of minor game announcements, some more appealing than others, and nothing to really jump us onto ship.

Usually it's the games and/or potential that lure us into wanting to buy into a new system, funny thing for me is actually today's announcement really makes me ready for a Wii U. The Wii U will be coming in two packages a Basic and a Premium. As we ALL should know by now, the Basic model comes with 8GB of memory, the console, a gamepad, sensor bar, HDMI cable and AC adaptor.The Deluxe set will have 32GB of internal memory and includes everything in the Basic configuration, plus a GamePad charging cradle, a stand for the GamePad and a stand for the console itself, plus a copy of Nintendo Land. The price comparison of both is $299.99 for the Basic v. the $349.99 for the Deluxe; and obvious steal for the Deluxe buyers, which I forgot to mention comes with Nintendo Network Premium Subscription, which gives you discounts on Nintendo games bought online. One new announcement is that of TVii, which seems to be some type of combine all video subscription channels into one application; but nonetheless seems like a fantastic idea. 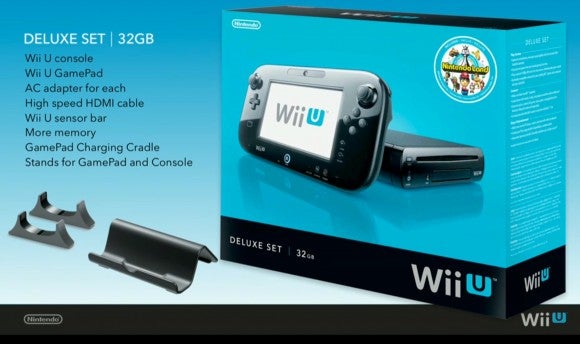 Unfortunately, no game list has been officially listed for the US, but expect our list to be similar to the EU's: New Super Mario Bros U, Nintendo Land, FIFA 13, ZombiU, Rayman Legends, Mass Effect 3, and Call of Duty Black Ops 2. In addition, a few new games, EXCLUSIVES, were announced like Bayonetta 2 and Monster Hunter 3 Ultimate Edition. The game list still doesn't appease me as much as it should and there hasn't been any word on the GamePro Controllers, but I don't think they matter as much for the time being. I believe Rayman Legends, NSMBU, and Nintendo Land can hold the fort for a while. In addition, I believe it is predicted that 50 games will be released from the Nov-March time frame.

For the time being my rate of me getting a Wii U at launch or around the Nov-Dec time frame has shot up to about 80%, I have the money there is no question, it's just the matter of me wanting to play and waste the money right away. I think Nintendo did the right move with the announcement today, so it gives buyers/gamers to plan and see what they want to do instead of searching the internet, and comparing different rumors and not knowing what to believe everyday until launch point. I do believe the Wii U is going to sell well, not fantastic, but enough to be considered a successful launch. The Deluxe set is what I have my eyes on (although I hope it isn't a glossy black otherwise I'll have to get White) and I just can't wait try it out. The price range doesn't seem to high, especially considering the costs of tablets alone and having the GamePad controller come along with a system at a price range of under $400 is a really good deal. While Nintendo could have handled the situation better, I think now with the proper information out, the Wii U can soar.