I do not mind jumpscares on principle. Done wrong, they are predictable, overly loud, or even just plain obnoxious. Done right, they can be a shocking, memorable payoff for the previously built tension and atmosphere. Regardless of how well they are done, I think it’s safe to say that horror films and games cannot succeed with just jumpscares. Something else has to be there to get people invested and excited for what is happening. A memorable cast, an interesting villain, a unique environment, or a compelling mystery can be enough to fascinate audiences and brave the scares all the way to the end. If only the people behind Friend Request got the memo.

Our cast is a group of college students, who I refuse to remember their names because they are as one-dimensional as it gets. There’s the Nice Girl (our protagonist), the Hot Boyfriend, the Hot Blonde, the Hacker Guy, the Chubby Girl, the Chubby Guy, the Mom, and the Creepy Girl (our antagonist). Normally referring to these “characters” as their roles is reductionist, but here it is entirely justifiable as the movie spends no time establishing them as anything else. They are cliches for the villain to hunt and nothing more. Here’s our premise: Nice Girl and her friends are taking classes at their college when Creepy Girl sends her a friend request on Facebook, which she accepts out of pity since she doesn't have any friends on Facebook. However, Nice Girl becomes frustrated with Creepy Girl since she is constantly messaging her and quickly becomes clingy. A few days later, she lies about not having a birthday party and doesn't invite Creepy Girl, which prompts her to somehow find the restaurant the party is held at and confront her about it the next day. A fight ensues and Creepy Girl’s hoodie gets knocked down, revealing a large bald spot on the back of her head and embarrassing her enough to leave. That night she commits suicide by hanging herself and setting her body on fire, all while her laptop is recording. This causes Nice Girl and her friends to all become haunted and slowly killed one by one. 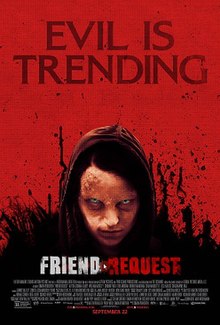 Fair Warning: Full spoilers from here on out.

Despite taking twenty minutes for the conflict to really begin, there were already four jumpscares consisting of just extremely loud noises and something innocuous happening like a creepy face in a mirror or a cast member being approached from behind. In fact, the first jumpscare is literally a trick video sent to Nice Girl. It’s a meowing kitten that, after a few seconds, changes into a spooky demon and screams into the camera. Having been so frustrated with the cheap scares, I decided to test how often this would happen. I went to the back corner of the theater so my phone screen wouldn't bother anyone and I wrote a timestamp of each jumpscare. The result? Eighteen jumpscares in just 92 minutes, with the shortest gap between any two of them being under a minute. Even worse, the two longest gaps were twelve minutes long, but the longest one after that was only six. It’s as if the movie had a jumpscare quota because it thought that was the only way to keep the audience from drifting to their phones.

While on the topic of what we are expected to be scared of, let's talk about our villain. According to Hacker Guy about halfway through, Creepy Girl’s suicide was an old wiccan ritual that allowed her to haunt Nice Girl and all her friends from beyond the grave. This cliched omnipotence includes posting the videos of her suicide and every character’s death using Nice Girl’s account, making it impossible for the cast to delete their accounts, creating dark visions for the cast to see, summoning black wasps to mark someone for death, and possessing characters to make them kill themselves. The only way to defeat the spirit is to destroy the mirror that Creepy Girl killed herself in front of, so the movie becomes a search for the laptop with character deaths sprinkled in here and there. So we know the villain’s motivation, her capabilities and her weakness, as well as her over-the-top backstory involving witch parents, a creepy cult, and an orphanage where her staring at the computer was so creepy it gave other kids nightmares. So now what? There aren't any unique deaths to look forward to, no unknown threat to ponder about, no characters we want to root for, and no unique settings to immerse us. Exactly what is the point of continuing to watch a page taken from Mad Libs: Horror Edition? Morbid curiosity? Buyer’s remorse? To make matters worse, in the end the Nice Girl finds the laptop she was looking for after all her friends are killed off and she winds up possessed. The laptop that was supposed to be Creepy Girl’s weakness actually gives her a vision of a forest where she gets jumpscared. Later, they cut back to the college where Nice Girl has basically become the new Creepy Girl in a sequel we will hopefully never get. Oh, and the last shot of the movie is Nice Girl looking at the camera from the top of her laptop while dubstep plays. Sure, why not?

I guess our omnipotent villain had no weakness after all.

So that’s Friend Request: a cheap, loud, cynical excuse for a movie that offers no new scares, no interesting characters, and nothing positive to contribute to the medium. The most entertaining part about the movie is the laughable poster above, and you would be better off limiting your experience to the trailer. The full film should serve as a monument to bottom-barrel horror, undeserving of the startled reactions it demanded for no reward. Much like the walking cliches we see in the movie, it’s all downhill the moment you hit “accept”.

I award Friend Request my first F grade. Nothing of substance works. No redemption can be found. Stay away.

Just another guy writing about video games in between playing and listening to music. Looking to improve my writing skills, so constructive feedback is appreciated!