9:04 PM on 07.08.2010 (server time)    0
It�s 12 in the morning and you can�t sleep. You�re feeling groggy and you can�t think straight. The only clear thought in your head is the blinding urge to cut something, anything, and to do it with style. Your glowing toy light-sabers are too dull and made of plastic; they won�t get the job done. And your collection of priceless knives has become dusty and drab; they aren�t stylish enough. So what could you possibly turn to for all of your awesome, razor-sharp blade needs?

Introducing, from the labs of the world-renowned Dr. Naomi, the BEAM KATANA!

The Beam Katana is the world�s first energy-based form of cutlery and the most powerful short-range weapon known to mankind! With its patented �Ener-Focus� technology, the Beam Katana�s cylindrical �blade� is actually a very tight loop of highly-focused energy that�s so concentrated, it can cut through nearly anything! Apples, cucumbers, pottery, wood, the flesh of another man, even steel! It�s a technological revolution!

And with its revolutionary Saber Saving System technology, the Beam Katana�s batteries never have to be recharged! With just a few quick shakes and/or thrusts, batteries are recharged once again to full capacity. It�s an Earth-friendly miracle!

Other developers claim that they are the originators of the Beam Katana, but they�ve merely copied the original and incredible designs of Dr. Naomi. And while other manufacturers of so-called �Beam Katanas� have only produced one model, the genius that is Dr. Naomi has crafted multitudes of varieties of genuine Beam Katanas!

The Blood Berry
Our basic model, but always trusty when you need something cut! With its easy affordability, now you can buy the whole family their own Beam Katanas!
$64,000

The Tsubaki Series
� The Tsubaki is for those who want a little more durability and precision in their Beam Katanas. With its stylish, compact design, you can whip out the Tsubaki wherever you are, for whatever you need.
$98,000
� The Tsubaki Mk II is one of our most powerful models, although with greater heft and cost. With its four separate and devastating cylinders, the Tsubaki Mk II is humanity�s greatest and most powerful in blending technology. Originally based off secret US Military plans, it is now commercially available to all savvy consumers.
$148,000 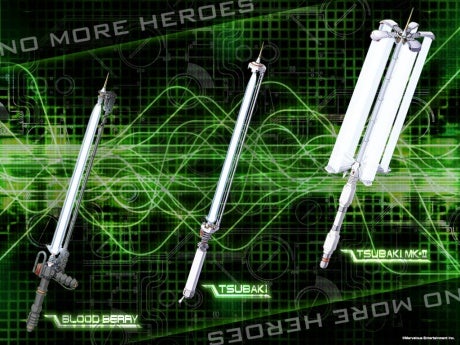 � The Tsubaki Mk III, while not as powerful as the Mk II, is the currently the only commercially-available Beam Katana that, with the proper Saber Saving System-brand motherboard, operates at maximum energy efficiency and does not require battery recharges. It also sports a snazzy design of the Kanji representing the word �Tiger� on its hilt.
$498,000

The Rose Nasty
A combined package of two small Katanas, the Rose Nasty is an incredible deal! Its light-weight components allow for complex, deadly maneuvers to be performed and with minimal injuries!
$200,000

The Peony
Our most powerful model to date, the Peony is the Beam Katana for those who can�t stop cutting everything in sight! Our patented �Ecstometer,� built into the device, measures just how much killi- I mean, cutting the user has done and how thrilled and ecstatic he is about all of it! Impress your friends and family! By the end of your next slicing spree, your Peony will be at least 1.5 times your body length, or your money back!
$300,000 As you can clearly see, Dr. Naomi�s labs have an affordable and quality Beam Katana for every occasion and/or assassination attempt!

But that isn�t all! If you order your choice of Katana now, you�ll ALSO receive a FREE select motherboard from Saber Saving System absolutely free! THAT�S A SAVINGS OF $50,000!

And if you order a second Katana, we�ll give you a FREE choice of colors and an included sticker-book! Customize your Beam Katanas for optimal awesomeness!

ORDER NOW!!!
#Community    #OpinionEditorial
Login to vote this up!