Pro Evolution Soccer 2008: A Goal of a Time or a Header of Fail?


Now before I start this review I am going to mention one thing. I refer to soccer as football. I do this not only out of respect for the sport but also it makes more sense to call a sport you play with your feet football whereas the American version requires the hands to play.

On that note lets begin. Pro Evolution Soccer 2008 has finally hit stateside and it could not have come at a better time. With Arsenal eliminating AC Milan in the Champions League I needed something to quench my football thirst. Sure I could have bought FIFA 08 but who wants hamburger when they can have steak? 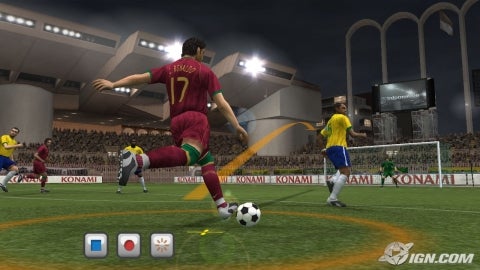 The game play is a lot better this time around than from the previous Xbox 360 installation. There seems to be more fluidity and finess to it that I found missing from the last game. Sending people on a run for a through ball has become normal again and doing short lobs have actually regained a purpose. Also, the manual does a great job listing all the moves and "tricks" which is something that I really wasn't expecting.

Master League, the reason why I buy these games, is back and with a nice facelift. Different changes to the interface provides a flashy arcade feel and the introduction with a popularity meter to your players and team helps show you what kind of clout your club has. Of course this said clout determines what kind of players you can pick up and who is actually interested in your club. No clout=No Big Name players. Other than that there isn't too much new with the Master League but as the saying goes "if it ain't broke don't fix it".

Konami also brought back a couple of other missing features. Being able pick your starting team, for instance, has returned to PES2008. The Winning Eleven Store has also been brought back as well, which is nice since the last Winning Eleven/Pro Evolution game was truly lacking in the unlockables.

Graphics, although noticeably crisper, hasn't changed a whole lot. Plenty of the generic faces and such but this can be forgiven since with so many registered football players in the world it would be quite insane to try to capture each ones individual look.

The bad thing about the graphics though is how even on a "next-gen" system the frame rate will drop terribly during the intros. At first I thought my 360 was dying out on me but it turned out the system couldn't handle the animations of all the fans cheering along with the players running out on the pitch. I would expect such a thing from the Playstation 2 but not a Xbox360.

I am a bit torn on the soundtrack though. It has a good mix of your typical techno/pop which half of it is enjoyable while the other half wants you to plug your ears with crazy glue. Rest of the game audio is as expected: same old crowd cheering, commentators commentate like expected to, and so forth.

So what is my final verdict on the game? Well if you are a football fan or a Winning Eleven/Pro Evolution fan I would say go ahead and give this a buy. You shouldn't be disappointed with it. If you are one of those people who hates "Soccer" and plays sports games for the sake of playing sports games then you should rent before you buy. In the end it is the same type of game that Konami seems to release, but that doesn't mean it�s a bad thing.
#Community
Login to vote this up!