A look back at Ultima 7: The Black Gate

12:23 PM on 03.19.2008 (server time)    0
There are many reasons to hate EA. They tend to destroy everything and anything that is good in the video game world and just leave it to die like some mule that has done its service and has no more work to do. During its feeding frenzy of video game companies though, EA manages to eat up and destroy one of my favorite companies, Origin.

For some of you that don't know Origin and founder Richard Garriot (who I heard still goes by the name Lord British) were responsible for the RPG series Ultima. A lot of the Ultima series was either hit or miss but you had to respect what Garriot had accomplished as a self-made programmer. His talent would come out in full force though with the creation of the 7th Ultima game.

The story, surprisingly, was a rather deep one. You, of course, are the avatar who once again returns to Britannia to fix what has be wronged. There has been strange ritualistic murders and apparently most or all of Britannia's magic users have either lost their minds or simply can not cast magic anymore. As the Avatar, your job is to investigate these phenomena's and save Britannia once again. I would delve more into the story but there are so many little facets to it that it would take up this whole blog to go over it.

The first thing one might notice when playing U7 is that the game looks a lot more violent. When you first step through the moongate into Britannia you are greeted to a corpse in a barn that has pretty much been mutilated. Although the graphics barrier pretty much held back on what one could consider "gore" in a video game, Ultima 7 starts the game off by greeting you to a bloodied corpse as if saying "Theres more where that came from".

What a way to start an adventure...

Which leads to the next startling revelation about the game: It is extremely open ended. How extreme? How about going into a farm town and killing everyone, including children, and then ransacking the town afterwards? May not seem like that big of a deal in today's gaming age but back in 1992 I would say it was pretty revolutionary. Like most open ended games, you were allowed to go about the game at your own pace and choosing. You could explore Britannia's many dungeons and forest or just go reagent hunting instead of doing the main story. Even if you chose to do the story it didn't give you a set mission rather than just an objective that you had to solve in one or many ways. Quite the change from the old Ultima and many RPGs of its time. 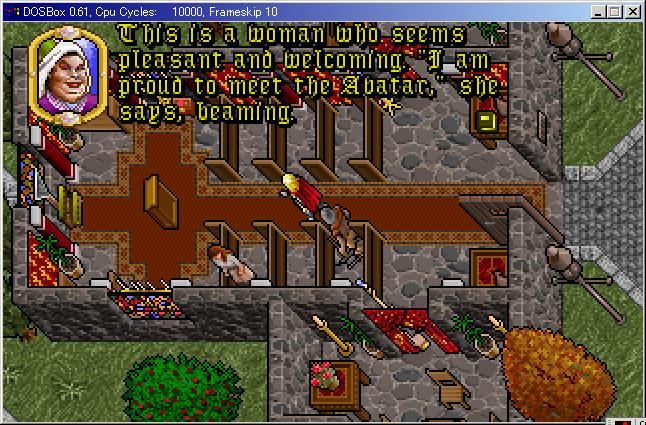 The action, although nothing too innovative, was fun nonetheless. Combat was done in real time with left clicks of the mouse to attack and hot keys to cast spells. As I stated even though this wasn't anything really new when you combined it with the ability to kill anything and anyone (even children) it made the combat a lot more entertaining.

The user interface was done with the "Paper Doll" system. The player would use the hot key to open up the paper doll of the avatar and equip items and weapons by clicking and dragging them on said hero. Also, the game featured the ability to search drawers and chests by a simple double click of the mouse and a chest would appear on screen with the items inside it. This would be a feature adopted by many popular RPGs such as Diablo and The Elder Scrolls Series.

So why was this game great? Simple answer is that the game just had so much to it. You could buy horses or carriages for transportation, you could rob people or just murder everyone you saw and still be able to complete the game, and the story was long and thorough and yet not complicated enough to make you just give up on it and freelance the whole game.

In short, it is a great game in an open ended environment and to anyone that should equal a good game. It is just unfortunate that this and Ultima Online were the last great titles by Origin before the big EA bought it out and turned the great name of Ultima to a joke.

And here is some video of the game. Unfortunately I could only find it in the form of a speed run.