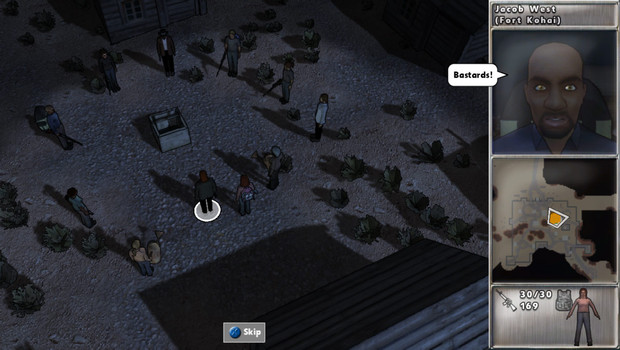 With all that negative stuff said and the score obviously reflecting some of it. I must say the developer is working on the game still. In just the short time I was playing an update came out to make the status bars clearer. Allowing you to clearly see when a character was in danger and needed food, water or sleep. I�ve even been in touch with the developer who has said a patch should hopefully be coming to sort out the text size issues.

Survivalist is a very ambitious game which really was surprisingly good quality to me. It�s clearly well made and the developer does care about it. The game honestly provides far more play time for the cost than I expected as I normally say �1 = 1 hour of good gameplay and while Survivalist has its fair share of ups and downs in gameplay but in the 30 hours I�ve put in I have to say it�s easily given me enough time even if it wasn�t all gold and was about 3 hours from of me save scumming. �The art style and UI really does work for the game and the amount of depth is enough to pull anyone i.

Survivalist however does also have some pretty off putting problem which really did hamper the experience and the major one which has the biggest score impact is the text being unreadable. It's not a perfect game is the point to take away here but it is very good

I am going to recommend this game as I�m in no doubt I�m going to be coming back to this game down the line especially if the text size issue gets fixed and I�m sure I�ll probably also end up reviewing and playing the game again in some form once the text size is fixed. This is one title that I really do feel should have a life beyond XBIG and come to PC. Even if it only goes on steam at say �3 as it is it will do well, heck if the developer gets it onto Early Access and works on adding even more variety to the game I can see it being a �5 well spent. Just think of that being �one of the cheapest Early access games which is already a substantial game but the money funding yet more content for the game.

Earning a recommendation from me

Authors last note : There a total of 4 horror franchise / article references in this review, did you get them all ?
#CommunityReviews
Login to vote this up!