See you thought I was done with SFB games but no it's time to rake them over the hot coals of critique again. Yes damn you SFB games you totally ruined Broken Age Act 2 for me...... Yes I know that sounds completely insane but to an extent it really did. Detective Grimoire is a crime puzzle game very much in the vein of older point and click puzzle games (Except in difficulty) and it puts Broken Age to shame for the most part. I wish I were joking but animation wise it seems as good as Double fine and the backgrounds seem almost as vibrant and detailed and this isn't a game that received millions in kickstarter fuding, it received $29,000 infact . While the game only took me around 3 hours to complete (I did look up the location of one items after getting fed up looking and the hint system deciding not to work). It felt on par if not better than Broken Age act 1.

The voice acting is competent if a little over the top from some characters (though it comes off more comical or deliberate than anything else). The two stand out's are the voice the little girl and the voice actress behind the character Sally Spears. Both of whom seemingly nail their performances perfectly. Which I'm going to suggest in a small part may be thanks to the script which for Sally Spears kind of makes me want her as a recurring character turning up in future games randomly with a new job each time or something. Sally Spears interactions with Detective Grimoire just added such a comical twist really with the mix of genuine interest and snarky comments.

The Puzzles in Detective Grimoire for the most part I have to say are kind of incredibly easy and solving the murder mystery isn't a huge challenge even without using the hints system. However the reason to play is more uncovering the mystery and backstories behind the characters along with their dark secrets and motives behind the murder. It's a testament to the story that while you might have an idea who the killer is quite quickly you'll still have doubts and suspicions of other characters for quite a while into the game. 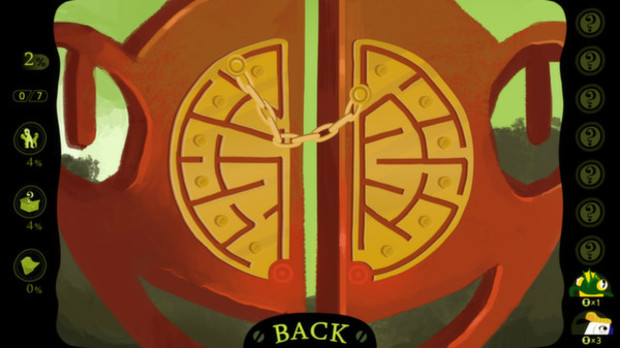 The game also has a very nice mechanics where you have to help Detective Grimoire put his thoughts together to make important realisations. This seems like a really nice mechanic but I think this led to much of the easy feeling to the game as it felt very directed by interrupting standard gameplay to confirm the important revelation. If possible I'd love to see this idea returning in future games but built upon so it becomes almost like part of the hint system. Say if you're feeling majorly stuck you can click on a button to "collect your thoughts" and trigger sort of extra puzzles which give you clearer direction of how to progress. So for example when you find out an important piece of information the extra dialogue options with relevant characters etc unlock but it doesn't explicitly tell you to go and talk to that person unless you then choose to collect your thoughts. This way you could progress without needing guiding so much but the option would also be there if people felt the need to use it.

The Audio options are quite impressive (though numbers on the slider wouldn't go a miss) but it's clear the developer did think about audio quite a lot to help give an ambience to the locations in the game. 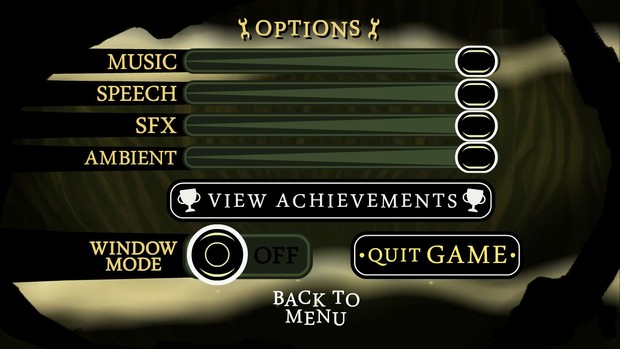 Ok so I have two negatives one very nit picky and one which I think the developers might expect if they read my previous review.

The biggest problem would be the lack of resolution or graphics options. This is a PC game and while it should run on most things being a 2D resolution options beyond simply windowed mode  are something PC games should have by default.

The rather nit picky problem was the location of the lock pick. For a game that was so clear on the direction for many things, I felt with the lock pick there wasn't much indication of where it was. For example there was no real reason to click on its location. No-one says about when they dropped something into the swamp something happened to the swamp water in that area until they fished the item out. There was no real indication of anything being hidden there like say a glint in the light or something.

That's really my only problems with the game personally. I also loved the ending which I won't spoil but it closes the present case but shows the starts of an overarching storyline that I'm guessing will run through a number of future cases. It's a very nice format for future games with each being a case on its own but tied together by a larger story.

less than 100th the budget of Broken Age

Just over 1/4 the selling price of Broken Age

Close to the same gameplay time as Broken Age Act 1

As good if not slightly better than Broken Age Act 1 (only held back by fairly minor issues) and as a package overall it's far better than Broken Age.With beautiful backgrounds and well done animation. Good to excellent voice acting. A good story which remains consistently good with plenty of twists throughout the game with plenty of interesting characters to talk to and uncover their dark secrets. It puts Broken Age and many other game in the point and click genre quite to shame. While it may be short clocking in at around 3 hours or so it's so high quality it more that justifies its present asking price on PC for such high quality. It does have its issues such as the lack of graphics options (but in unlike Haunt the House these do not cause problems at any point). It could also be said the puzzles are a little on the simple side (though innovative and enjoyable). I'd say part of the lack of difficulty comes with how well most of the game directs the player maybe a little too much such that some of the, very well done, mechanics around directing the player could be put as optional things to help the player, rather than mandatory aspects of the main game. 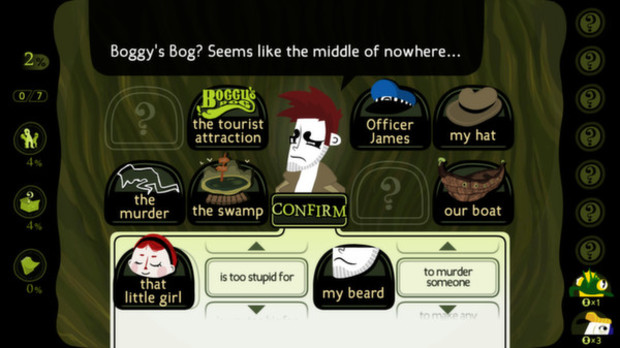 For anyone who has recently finished Broken Age and was left disappointed or wanting something to play. Detective Grimoire is the game to play. I give it my recommendation and suggest you go and buy it now.

After originally publishing this review on my site the developer did actualy respond to the issues I'd pointed out in this review.

The hint for lock pick location is meant to be the same as for one of the other clues. The problem is I kind of found the other clue by a random click and the hint vanished after so I never made the connection as such.