In honor of the 28th Anniversary of Metroid's North American release, I felt like sitting down and reviewing what I consider the seminal entry of the Metroid franchise, Super Metroid on the Super Nintendo. 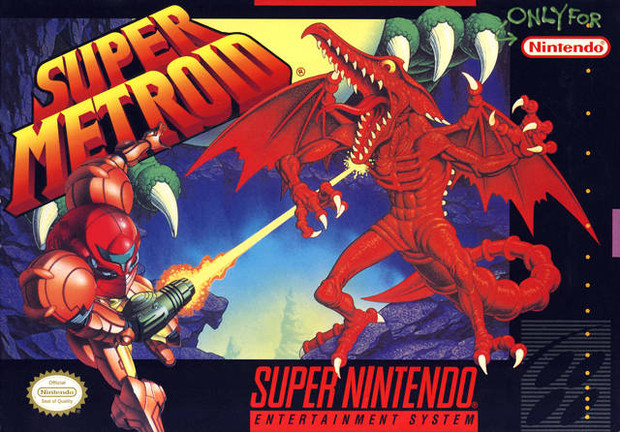 Super Metroid is the third game in the franchise, and continues the story told in Metroid and Metroid II: Return of Samus. After defeating the Mother Brain on Zebes and slaying the Metroid Queen on SR-388, Samus delivers the galaxy's sole surviving metroid--a tiny hatchling--to a Federation research colony for study. Moments after leaving the hatchling is kidnapped by Space Pirates and Samus must return to the planet Zebes to recover it.

Gameplay: The premise of the game is pure simplicity: fight your way through Zebes' death-world environment and rescue the hatchling. Despite wonky (to some) controls, Super Metroid makes excellent use of the SNES controller, allowing for greater freedom of movement that previous Metroid games (and even future Metroid games on the Game Boy Advance) lacked. As she explores the underworld of Zebes, Samus discovers a wide variety of tools and weapons that allow her to morph into a ball to squeeze into tight areas, run at hyper-speeds, swing from an energy-grapple, scan the environment with an X-ray visor, plant explosives, survive super-hot temperatures and move freely underwater, to name but a few. Her continual upgrades not only turn Samus into a more badass warrior but also allow her to solve various puzzles located throughout Zebes.

Exploration is a huge part of Super Metroid. A non-linear map and backtracking in search of items you missed is a staple of the Metroid series, which Castlevania: Symphony of the Night heavily copied--so much so that games of this type are referred to as "Metroidvania" even though Castlevania only adopted it in 1997. Regardless, Metroid still does it best: Super Metroid is filled with hidden secrets and requires creative use of your powers to access them. Finding 100% of collectible items is a badge of honor for Metroid players, and YouTube is full of Let's Plays earning this achievement both naturally and with the aid of ridiculously skilled pre-programmed bots, which are good for a watch if only for the sheer "WTF" factor.

If I had one complaint about Super Metroid, it would be the inventory system. Later in the game, when you're carrying a fully loaded arsenal, switching between Missiles, Super Missiles, Power Bombs, Grapply Beam and the X-Ray Scanner gets annoying, especially during boss battles. 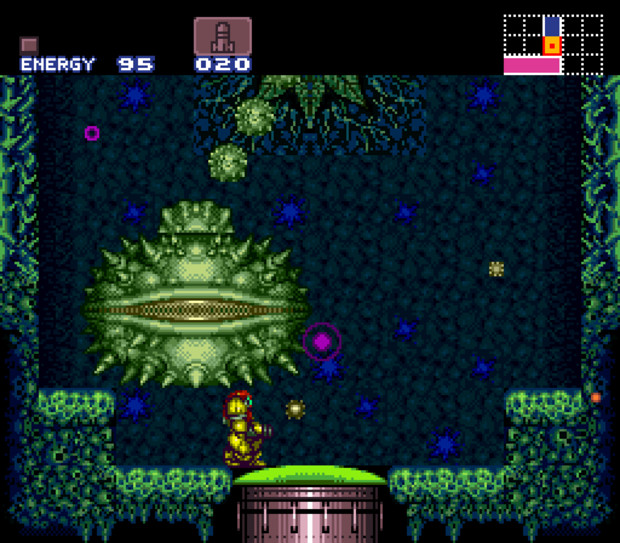 As a boy, I honestly thought this boss's name was "Dingleberry."

Audio/Visuals: Super Metroid's graphics and music were impressive for its era. The environments look a bit dated, but are full of motion and a wide variety of unique monsters. The big bads of the game are huge and visually distinct, requiring a mix of missile-spamming and strategy to defeat. The music of Super Metroid is also one of its highlights, particularly its boss themes. The creepy piano keys of the Spore Spawn boss and the epic Mother Brain theme are my favorites, but special nods go out to Ridley's theme and the Lower Norfair (Ridley's Lair) theme, which proved popular enough to return in later Metroid games. 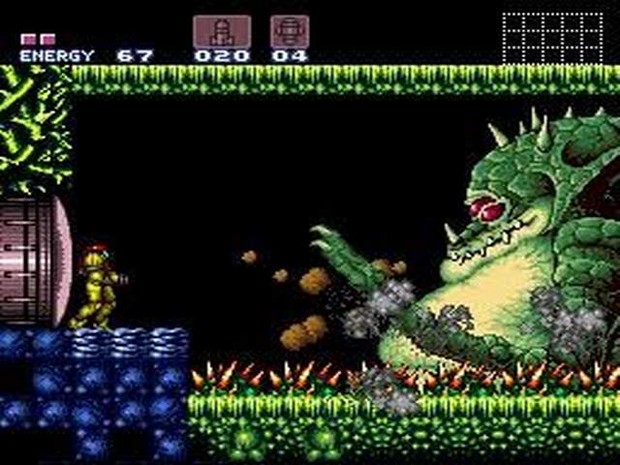 The dwarves dug too greedily and too deep.

Story/Setting: Super Metroid remains my favorite Metroid game for one reason: visual storytelling. There is some brief text at the beginning, recapping the previous two games, and then you see not a single cut-scene nor collectible audio-log from the start of play to the end credits.

Arriving on Zebes is one of my favorite moments. The planet is rain-soaked and eeriely quiet. There are no foes around, only ominous music to accompany you as you venture into the depths and explore the crumbling ruins of the pirate base and Mother Brain's previous containment jar from Metroid. Throughout the game you have more moments of creepy ambiance or see the implication of something horrible, like the dead humanoid figure outside of Kraid's lair, the haunted ruins of the Wrecked Ship, and corridors full of dessicated corpses in Tourian. All these little touches of character and implied story elevate the game, so you're not just playing in "lava world" or "plant world" but visiting a place that intelligent beings lived and died in. 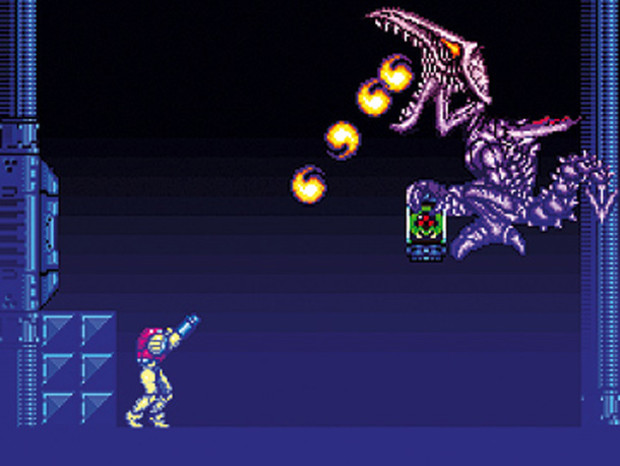 Final Thoughts: Super Metroid is a classic, and one of the best of its kind. In my opinion, Metroid hasn't been able to measure up to it since, though Metroid Prime has made a valiant attempt to transition the exploration-platformer to 3D. My one regret as technology improves is that Metroid seems to be falling behind, unable to properly translate the mechanics that made it famous to the graphics and gameplay demands of the modern era. I've been chomping at the bit for more games like this since Metroid: Zero Mission came out more than a decade ago. It makes this 28th Anniversary somewhat bittersweet, as I feel that the franchise's best days are behind it. Still, Metroid lives. I'll definitely be checking out Metroid Prime: Federation Force when it comes out. Some fans have bemoaned it not being a "real Metroid" and I kind of get that.

It's not a fucking pachinko machine.

+ Excellent gameplay.
+ Great design and visual storytelling.
+ The best Metroid before or since.

- Controls can be odd or stiff at times.
- That annoying "health low" alarm.
- The best Metroid, before or since.