Every fighting game series has those certain characters that no one likes. Let's take the top dog of fighting games, Street Fighter, for example. Everyone hates Akuma, and in the interest of not being torn to shreds, I'll clarify now that that was just a joke. Outside of Mortal Kombat, I've never been much of a fighting game fan, and after MK: Armageddon wound up being spectacularly dreadful, I swore them off for good. But Mortal Kombat was instrumental in growing me as a gamer in the early and mid-90s. I spent more nights in 1995 playing MK2 and 3 with my friends than not, and I've written before about why the series as a whole has a very sentimental place in my heart. So for the next two weeks, the Weekly Top 5 will be Mortal Kombat related, this week being the worst characters, and next week being the best. And no, I will not be that guy who spells everything with a 'K' in case you were wondering.

Jax has never been a favorite of mine. With every MK, I feel the need to beat the game with everyone so I can see their endings, and in every new entry in the franchise, Jax is always one of the last ones I pick. The one thing that stands out about Jax are his cybernetic arm enhancements, but if you're new to the franchise, or started playing at or past MK3, you may have forgotten that when he was introduced in MK2, he didn't have them. He was just a generic black guy with a mustache and a muscle-gut. His one redeeming quality is that he does have the sweet "arm rip" fatality.

Once Jax got the arm enhancements and they started making him look more like the U.S. Special Forces that he was meant to be, he became incredibly less boring. He's still not one of my favorites, though. 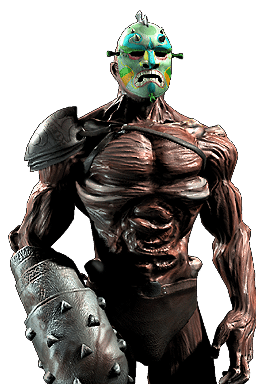 Apparently Drahmin's magic power is that he doesn't bathe? I mean, that's how it seems when you consider that one of his major attacks is that he shoots a giant ball of houseflies at you. The sad part, though, is that Drahmin actually has an interesting backstory: He wears the mask to control his murderous insanity, as he at one point was a cruel warlord in Outworld. He was later exiled to Netherrealm to be punished for his atrocities. He was then hired by Shang Tsung and Quan Chi, along with his fellow Oni, Moloch, as bodyguards. Without going into greater details, Drahmin is one more or less responsible for the plot of Deadly Alliance.

Here's the problem with Drahmin: he's uninteresting and no fun to play. With Deadly Alliance, every character was given two fighting styles and a weapon. Drahmin's weapon is the metal club that acts as his right arm. I mean, I guess it is technically a weapon, but when it's attached to you, and you use it during your other fighting styles, what's the point of still having the option to use a weapon like every other character does? Seems rather pointless to me.

If you're the type of person who says things like "Actually, I like Stryker" then you're saying it to be confrontational and I hate you for it. That was mean. I'm sorry, I don't hate you. But seriously, stop it. No one likes Styker, not even in an ironic way. I was told that he is actually pretty powerful, but I never found out if that were true or not, because again, no one likes Stryker.

In a game full of awesome new characters like Sektor, Cyrax, Sindel, and Kabal, it's a shame that Stryker was introduced alongside them. So we get matching robot Predators, the resurrected queen of Edenia, a dude with a weird breathing machine and awesome hookswords, a female Shokan (Sheeva), and then we get a human cop with no powers. Let's play a game, it's called "One of these things is not like the others." The only interesting fact about him is that the name "Kurtis Stryker" was originally the name they were going to give Jax in MK2, and then they sat on it and gave it to this loser.

The one big negative that the Mortal Kombat franchise has working against it is that they've created very few good new characters since Mortal Kombat 3. It seems that when the series made the jump from 2D to 3D that they lost their creativity, and their roster is the thing that suffered the most. WithMK:D, they jam-packed the game with all kinds of diversions from the main fighting game. There was a Puzzle Fighter clone, there was Chess Kombat, and the new Konquest Mode (which I actually found to be the funnest part of the entire game) was more or less an open-world adventure game. With all of those things going on during development, it's no wonder the new characters suffered.

The only new character in Deception worthy of being a Mortal Kombat character is Havik. Here, let me show you all the new playable characters: 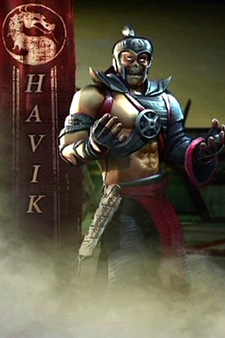 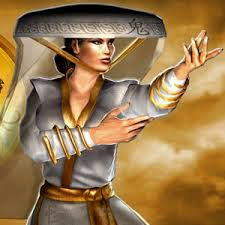 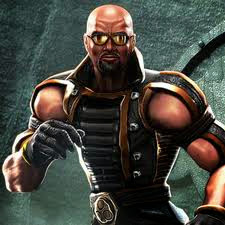 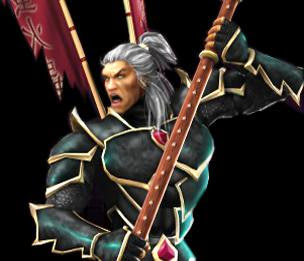 Hotaru: He has flags. 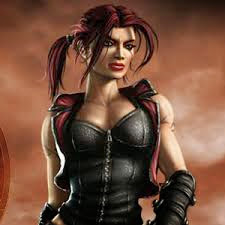 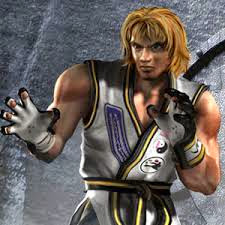 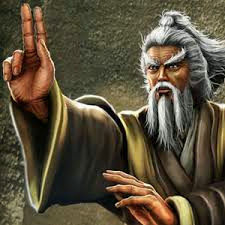 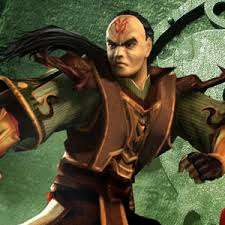 Yup, that sure is Dairou. I know I haven't spoken much about the character himself, but that's because there really isn't a whole lot to say about him. He's a mercenary, his parents were killed by Darrius, Dairou has no idea, and then Darrius hired Dairou to kill Hotaru. Got that?

However, much like MK2 Jax, Dairou's single high point is his rib-ripping fatality. 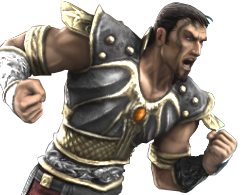 If you're looking at that picture and thinking "Who?", you're probably not the only one. Taven is the most bland character in MK history, only Stryker even comes close, I think he uses fire as his main element of attack, so that should be another indicator of his uselessness. The only notable thing about Taven is that he's the one you control in MK: Armageddon's "Konquest" mode, which isn't saying much, because the Konquest mode in Armageddon is far inferior to the one in MK: Deception. They basically took the premise of Mortal Kombat: Shaolin Monks, which is an absolutely fantastic game, dumbed it down, tacked it on, and pooped it out.

Hsu Hao is so bad that even the creators of Mortal Kombat hate his guts, which makes you wonder why they even bothered to include him in the first place. There's literally nothing positive to say about him. He was introduced in Mortal Kombat: Deadly Alliance, and in a game that was littered with lackluster new additions, he was without a doubt the runt of that litter. I'm not kidding, either, I could have made this entire list be nothing but characters introduced in MK:DA.

Hsu Hao (pronounced Soo-How) is basically just a pawn for the Red Dragon crime syndicate under the orders of Mavado, another dumb DA character. Hsu Hao was actually acting as a secret agent for the Red Dragon and infiltrated the ranks of the Chinese sect of the Special Forces (Jax's organization). Then he was ordered by Mavado, who was being ordered by Quan Chi, to kill Shang Tsung. On his way to do so, Jax catches up with him to get revenge and rips his cybernetic heart out.

He has a terrible design, is no fun to play, and is universally despised by the MK community. Most characters in the franchise have at least one redeeming quality, but with Hsu Hao, he could have been taken out of the game in the 11th hour and literally nothing would have been affected by it. Hsu Hao is the worst of the worst.

Cue the sweet Mortal Kombat theme song here, because that's the end of this week's top 5. This list was hard, because there are a surprising number of bad characters in the MK franchise, but I have a feeling it's not going to be nearly as hard as trying to rank the top 5 best. See you next week.

Don't forget to follow me on Twitter @TheDustinThomas, and to listen to the Error Machine Podcaston iTunes.