7:20 AM on 02.21.2012 (server time)    0
So someone finally bothered to put PS Vita cards to the test on the value level. I had my suspicions about the Vita memory cards before playing the demo kiosks and was rather puzzled regarding the large load times of Vita games such as Gravity Rush.

I had gone on and on about the price of Vita cards and why they were too expensive and Sony fanboys swore up and down the prices were what they were because of reasons. One of the latest defenses being that the cards were probably Class 10 reading speed.

Well, that's a nice theory, but Sony doesn't say what class the Vita cards are. I checked in-store and online, but couldn't find any details on the matter. Class 10 SD cards are typically around $59.99 - give or take - if they're 16GB cards, which is the asking price of the Vita card.

Turns out they're not Class 10, though, but Class 4 when someone put them to the test on GameFaqs - meaning, they read at the same speed as your standard 16GB SD card, which can be found at a Radio Shack for $19.99 to $29.99 depending on whether or not they had a sale that week (and I've yet to pass through on a day they're not on sale). I did pick an 16GB SD card last week for $19.99 because I'm a cheap bastard that doesn't want to fork out for a proper 360 HDD right now, but when I do it means I'll then have more storage for my 3DS than I will likely ever need. 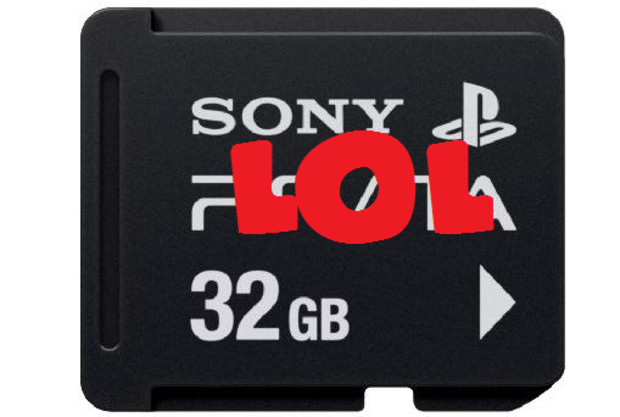 If you're heading out for a Playstation Vita today, my advice is buy whatever card rips you off the least. You will not be getting the storage you deserve for your money, but at least you'll be getting something closer to your dollar value for a 4GB card than you would anything higher than that. Plus its not like all your PSOne Classics are available for play today anyway.

Additional link with more discussion on the matter.

And now, for the SDF's excuses for this one. The rest of us know what this was really about - mitigating the damage of the PS Vita's price point and nothing more for as long as Sony could fool the early adopters.

What I'm really saying here is if you're getting that 32GB card, you should just give that $100 who would spend it better. I won't turn it down.
#ShareonCommunityBlogs
Login to vote this up!