I hate multiplayer shooters. To me there is nothing more boring, than any given weeks new by the numbers, free for all, battle royal extravaganza with crafting mechanics, which offer 1 bazilion Shooty Shooty coinsTM if you sign up RIGHT NOW so you buy yourself a nice pair of new trousers. Usually, if it’s just a standard shooter, like CoD, you’ll find yourself doing the same thing of running a corridor, blast a bad guy, run down another corridor, die, and respawn until the match ends. Then you get to try the whole experience again when the next round starts, but this time it’s on a boat. If you play a typical Battle royal game like PUBG you get to experience the wonder and excitement of running through a field until you are sniped by someone with a better gun than you, or experience the wonder and excitement of running through a delipidated building until you are shotgun blasted by someone with a better gun than you. Thinking back on it I probably just suck at games, but the undeniable truth is these games all kind of blur together. It’s a whole lot of running and shooting on the same maps, with the same guns, against the same enemies, for the same reasons. And this is where the part where Hunt: Showdown, stinking of bog water, zombie guts, and moonshine, kicks the door down and blows my expectations away with a 17 round revolver.

In Hunt: Showdown, rather than playing burly soldier no. 283, you play as a supernatural bounty hunter tasked with hunting down otherworldly monsters spawning out of the bayous of 19th century New Orleans. Your job, therefore, is to therefore slowly but surely follow the trail of one 3 different monsters I see when I get sleep paralysis, blow them to kingdom come, and then run out the map with proof of your grizzly dead. The problem however of course is your not the only one wanting to make money by shooting the monsters from SCP: 19th-century edition, so you also need to actually escape the map through randomly placed exits before you find a bullet taking the space where you kept your memories of your Grandma. If that concept doesn’t even slightly interest, you then frankly we can no longer be friends as you are clearly terminally boring. 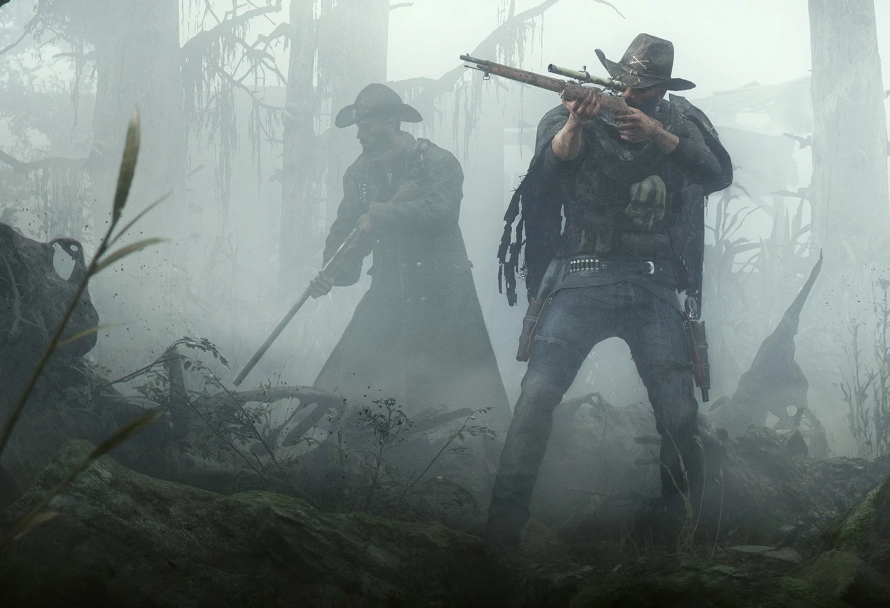 The game also doesn’t simply rely on one gimmick to try and make it stand out from the crowd, instead using the novel idea of multiple gimmicks in order to make combat unique and interesting. As mentioned before, the main objective in Hunt’s most popular “bounty hunt” mode, is to try and try and kill a boss monster, hidden somewhere on the map, and get out first with glowing clue points slowly crossing off locations on your map until you only have one spot left. This is basically Hunt’s solution to the death cloud / forcefield / giant wall / angry lightning fart storm that slowly closes in in every other game but done better in every single way. First and foremost, since you have to find clues to narrow down the map, everyone is going at a different pace, and everyone can adopt different strategies to try and get to the boss in their own way. Do you sprint as fast as you can to the closest clue points so you can get to the Boss monster first and risk getting heard along the way? Do you move slowly and carefully but risk someone else getting to the boss before you? Or do you just say sod that and simply hang out by an exit in the hopes the player comes to you? Most importantly of all, it gives you an objective than simply be the last man standing, and there is always the panic in the air of is there some idle brained hic already 2 clues ahead of you about to steal your hard-earned butt ugly monster kill.

The game also does an excellent job of making encounters with other plays more suspenseful and exhilarating. First and foremost, this game has permadeath. Yes, a battle royal game, has permadeath. This doesn’t just mean you lose your guns, but also any perks and levels you may have assigned to that character, as well as any connection you may have had to that character after working with him so long (you will be missed Jebediah!). To combat this, matches start with far fewer players in a similarly sized map. What this means, is that since the objective is to not simply blast away every person you see, but to find a thing and get out as quickly as possible, bumping into another player actually becomes a rare experience. I have gone through entire games where I have never seen even another wretched soul. To some people, this may sound like a nightmare. Why would I want to play a shooting game if I don’t get to shoot people? Well first don’t worry too much the map is littered with hundreds of horrible lesser monsters who want to kill you just as much as the other players, so you’re not going to be wandering around aimlessly for an hour. But what this also adds is a fear of the unknown. When you play PUBG or Fortnight, you know you will eventually run into another player, you have to for the game for work. You don’t know that in Hunt showdown, which means actually realising you’ve run into another player that much more tense experience as they maybe just as surprised to see you as you are of them! 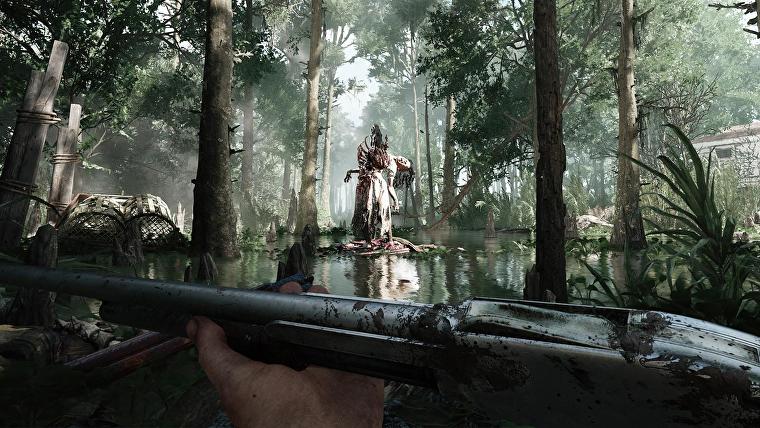 This is all supported by a brilliantly designed atmosphere. Most shooters either like to look bright, crisp and clean. Some of the more adult games like to take things a little further with maybe a bit of rubble here and there to show the battlefield is “lived in”. Exhilarating stuff. Hunt’s developers meanwhile decided to look at their nearest bog, screamed “IT’S PERFECT”, and frantically started shovelling mud into their bags so they can scan it in for textures. The game is beautifully ugly. Light passes sickly through dense dark trees, the light barley penetrating thick, bubbling, mud. You can almost smell the stench of rot, mould, and decay,  through your screen. The buildings too, decided to go with the avant-garde style of a university students’ bathroom. The map doesn’t simply have a few abandoned towns in a swamp either, but individually made, desecrated churches, logging camps, mines, and even prisons telling a story of a community that has literally gone to hell. This visual storytelling even goes on to the characters and their weapons. Your team of Bounty hunters all drawn and haunted their eyes clouded and looking into the distance. These guys have not simply been staring into the abyss but have been having casual coffee and cake meetups with it for the last few years. The weapons meanwhile have also been clearly altered and edited for the task at hand. Rifles have large scythes attached to the hilt, with some shotguns having a whole axe attached to the butt of the gun. It speaks of a world where dealing with the shambling dead has become as common as grocery shopping, and the hunters have just the tools for it. This grotesque world combined with the fact at any moment you may bump into some disgruntled Hunter singing “I wish I was in Dixie” means you are almost constantly on edge from spawn to dramatic escape.

Yet this is all without mentioning Hunt’s greatest achievement, sound. Now on the surface, this may not particularly sound like much, (see what I did there?!), it is after all pretty standard for a few big AAA games to come with sound and music in this day and age. However, sound in Hunt becomes far more important than just simply ambience. In Hunt every part of the landscape makes noise. Walking through water makes noticeable splashes, floorboards routinely creak and groan, and startled birds will practically scream “HEY! HEY EVERYONE, THERE’S A DUDE OVERHERE WITH A BIG GUN OH MY GOSH SO SCARY!”. This combined with actual sound alarms like patches of broken glass, and dangling chains, all that must have been left up by a lazy punk EDM rave, make The entire map is basically one massive sound trap, meaning if you stomp around in your brand new cowboy boots you can be heard and killed from pretty far away. I have won entire firefights this way, for instance when trapped in a barn, I could hear a player had started sprinting across its corrugated roof to a small hatch in the side of the wall. He was dead before the hatch had even swung open. Even gunshots can be heard practically across the map, which means the majority of your time in the shooter, you will resort to using knives, axes, and hammers to avoid being heard. Top that off with a brilliant soundtrack which goes with the game’s atmosphere like potatoes and molasses and you will find some of the best sound design and score that I have seen any game, period. 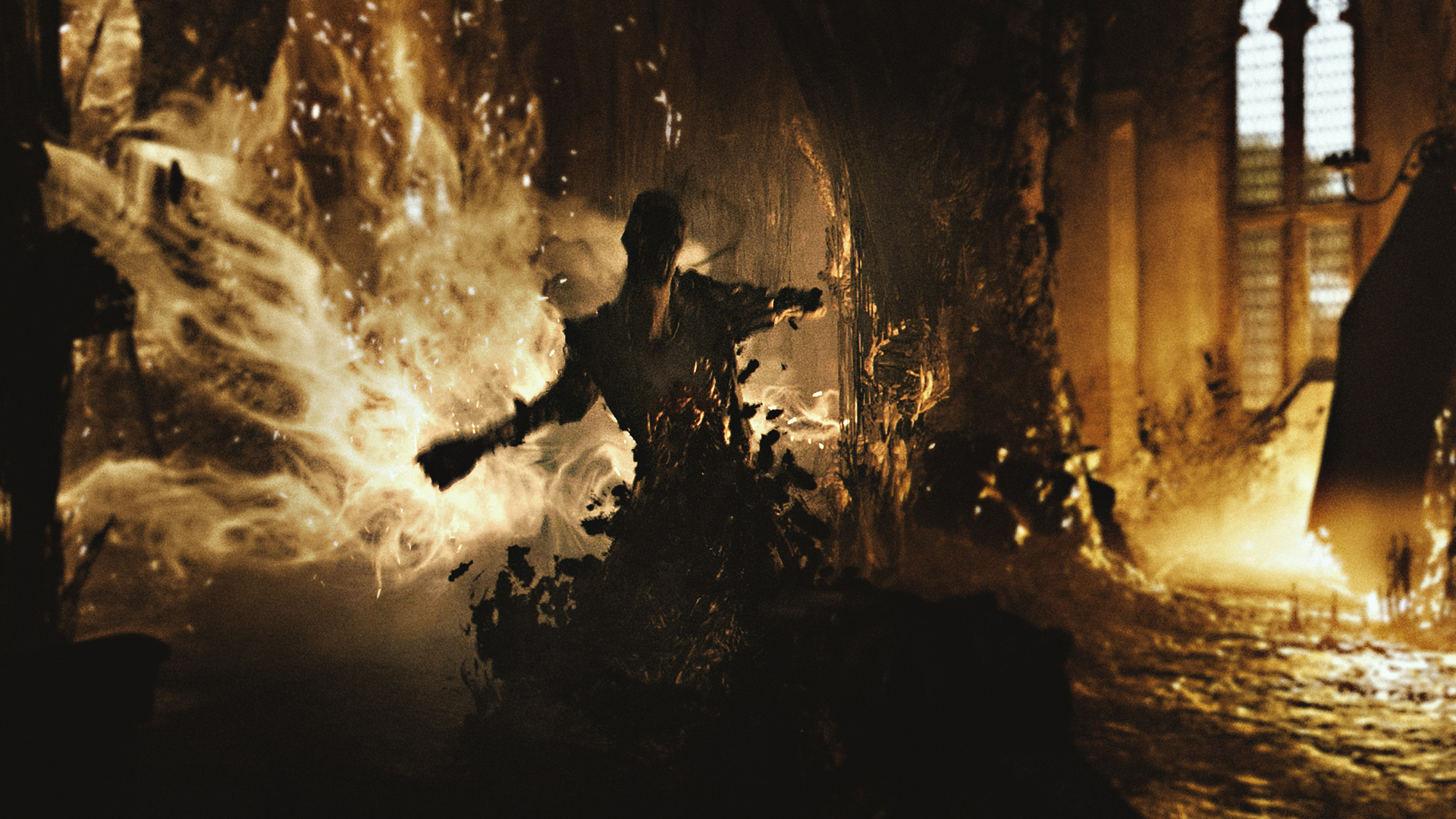 Since by this point, I have likely offended everyone south of the Mason Dixon line I should probably quickly this up before I somehow offend the rest of the USA. There are many games out there that are like energy drinks. They promise the GREATEST action, with giant sparkly colours and writing, AND THE CHANCE TO ONE MILLION DOLLARS, if you but simply play your cards right. Hunt, meanwhile, is an aged whiskey. It’s slower, smoother, happy to take it’s time for you to experience every aspect of it. Before hitting you with the hard kick of alcohol as the bullets start flying and your trapped in a slaughterhouse with 3 demon-hunting madmen and a flaming pig monster and you just picked it up in the first place because the front cover had a cool cowboy on it. There is nothing wrong with energy drinks, but they’re just not for me, and if you're looking for a shooter that has as much substance as it does style, then I hope to see you in the Bayou.