Everyone has their own ghosts to face. Whether it’s the stench of the regret for an action taken, the pain you may have caused a loved one, or the fear of something unknown, we all have something we need to work through. Thus, it seems appropriate for me to face my own ghost in the month of Halloween. I just never thought it would come up in a game about stopping giant robots.

So, when did I enlist myself as the plucky new member of Ghost busters? It all began when I decided to deal with some of the skeletons in my Steam library, and finally sit down with some of the games I just never got round to playing. The first item on the agenda? Metal Gear V: The Phantom Pain. On paper, this would seem like something I was hardwired to love with every atom of my being. To the uninitiated, you play as “Snake”, also known as “Big Boss” or one of the many other codenames he is given in every new instalment. A soldier / spy / guerrilla warrior / professional grumpy man,  trying to make his way through the cold war by stopping doomsday devices dubbed Metal Gears (hence the game name) and generally being cool enough to give Jack Bauer a run for his money. In fact, in this instalment, Snake is even voiced by Kiefer Sutherland! It has everything I could possibly ask for in a videogame; Stupidly high stakes, intrigue, a complicated timeline filled with so many traitors and double-crosses it could practically tie itself into a bow, comedy, action, cardboard boxes, and of course, the secret to any man’s heart, accurately presented historical references. This game seems such a perfect fit for me I wouldn’t be surprised that Metal Gear’s creator, the one and only Hideo Kajima, simply pitched the meeting by slapping a big picture of my dumb face on a board and said: “I want to make a video game for this guy!!”.  Or since he’s Japanese he probably said: “ 私は日本語を話せません、これが何を言っているのか分かりません”. 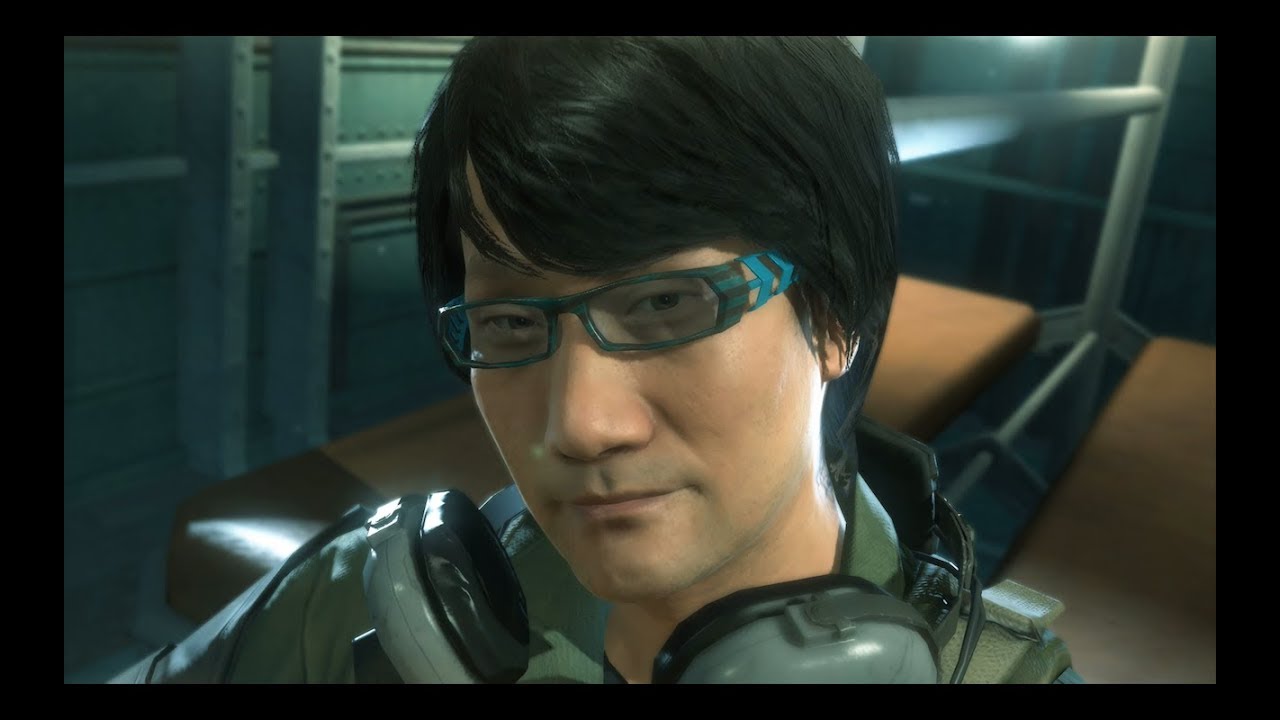 To give you some context as to why certain letters in the alphabet bring me out in a cold sweat, during high school I was basically a male Hermione Granger, only with Spock’s haircut, and an obsession with video games. The only thing that has really changed since then is that I’ve discovered hair gel exists. What this means, however, is that for whatever reason, I unhealthily attach my worth to my grades. While at school and uni, I put everything I had in my essays and exams, for I believed their grade at the end was grading me personally, how good I was, how useful my abilities are. What that meant is if I did not get a good grade, I obviously could have done better. Meaning, I. Wasn’t. Good. Enough. This is a lie, that continues to rule my life. Whether it be through the pressures of school, or some particularly evil creature of a teacher I have somehow leant that the way to find my value is to look for a certain letter, and a particular score out of 100. And that means that even when it comes to videogames, I would always need to get the top-grade score. Otherwise, I was reminded that I wasn’t good enough. What this meant for when I played Metal Gear is that I would have to restart every time I was caught, over and over, getting more and more frustrated, so I could get the perfect, no kills, no alarms, super-spy award. What's worse is that every single mission is graded. So my performance would be judged. Every. Single. Time.

My issue with Metal Gear’s grading system doesn’t just stem to my Moby Dick level obsession with getting the best grade ever. One of the many things that makes Metal Gear so fun is the vast amount of toys it gives you to complete missions. From gadgets and gizmos that even James Bond would find ridiculous, a wide variety of vehicles and companions including your very own rideable mech, and more guns than a paranoid redneck would know what do with, Kajima gives you the means to finish a mission in any way you want. This means any given mission could be completed with guards either having never acknowledged your existence or having more holes in them than swiss cheese. The only problem is while the toys available seems to suggest the game wants you to fight in a way that seems most fun, the grading system says otherwise. The only way to get the highest grades is to be as stealthy as possible, with points deducted for, alarms triggered, times hit by enemy fire, or people killed. This means that if you want the high score, you can forget about using the mechs mini-gun attachment or any gun that doesn’t have a non-lethal mode, which is basically all of them. It’s like going out to dinner with a picky eater. You have a world filled with delicious food you can try, but you know they’re going to complain if they don’t have chicken nuggets. It also stifles creativity, as it means that a player can’t experiment with their new gadgets, as if the experiment fails, they may end up killing someone, and down goes their grade. 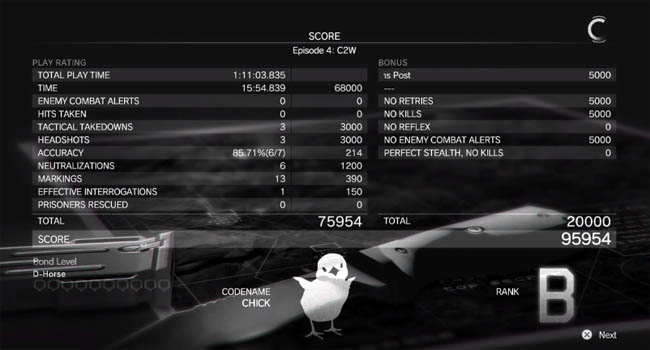 Thankfully, however, a higher grade only provides you with a bit more cash to buy more guns and goodies, so it doesn’t seem to have a colossal impact on the game world. Meaning those with a healthier outlook to life can simply ignore the grade and get on with their lives. As for me, I am desperately trying to do the same, mainly by spamming the skip button as soon as that horrifying score screen appears. As a result, I am having so much more fun. When a stealth mission inevitably goes wrong, as I am stealthy as I am calm when I receive an exam result, instead of getting annoyed and restarting I can enjoy the sheer panic of trying to cover up my mistakes or simply whip out a machine gun and get blasting.

So that’s the happy end to my ghost story. How a game that lets you wear a rubber chicken as a hat brought more fear in me than any horror game I could find. And to those of you who relate to my story let me say one thing. Just as your actions speak louder than your words, who you are as a person speaks louder than your grades. The people of true importance in your life, like your family, or your friends, don’t look at your SAT scores to see if you are worthy of being loved, and if they do, they are not worthy of your time.  Every single person has a brilliant unique thing to bring to this world that no test or essay will ever be able to calculate and rank you on, and that is what matters most about you.