Video Game Soundtracks: Then versus Now 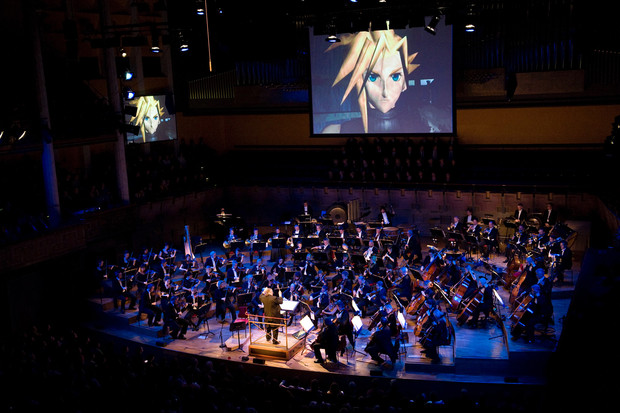 I read an article called: Where did the Groove Go? by Jim Sterling. It's about how and why video game soundtracks used to be better. While agree on them being amazing I don't think it's as simple as saying "Old soundtracks were better". I started writing a reaction on Dale North's tweet about the article on Facebook but it turned out to be a little longer than a simple comment. I don't have a sound and clear answer but I do think it could bring forth an interesting discussion.

I think it's way more complex than the writer of the article makes it out to be. Are the older tunes really better or is it nostalgia? I love the old 8-bit tunes but for a large part because it brings me back to the days I was playing those games. Also, it's the way we played games back then. Not a million hours of game-play. Just a handful of levels which you needed to play through again after being game over. Which made it so you heard the same tune a gazillion times. No wonder I still remember the Sonic the Hedgehog soundtrack. I would probably get really annoyed if soundtracks today were handled in the same way as before. "AGAIN THIS @##[email protected]%**& SONG?!" Which kind of happened with Burnout: Paradise. I've played that game for many many hours and can't stand "Paradise City" by Guns 'n Roses anymore. It is different of course since I already knew that song. But it will remember me of the (amazing) Burnout: Paradise until I die.

As the writer pointed out it isn't all bad nowadays. Unlike him I do remember the Killzone soundtrack very well. Full orchestra, modern but I still think it's amazing. Just like the Metal Gear Solid and Assassin's Creed series (all of them). I know every single song. What about Shatter? That was some gorgeous soundtrack. It made the game and really sticks. Halo has an amazing soundtrack. Everybody here will instantly hear the Gregorian choir in the mind. There are many many more recent soundtracks we can come up with. Although I don't know what the deal is with Call of Duty: Modern Warfare[i/] because, just like the author of the article, I don't remember anything of it. But I do know the [i]Call of Duty: World at War soundtrack by heart. Might have to do with the fact I beat that on Veteran which was a nightmare. Many hours of replay. So yeah, that could be it.

Overall I think soundtracks nowadays are more mood pieces than actual songs. And when they are we remember them more easily. Everybody knows Portal's "Still Alive" and can sing along or at least hum along. It's an easy, simple and catchy tune and we heard it a million times. Which is the same with older soundtracks. Which evidently proves the whole point.

So okay, let's change those "mood pieces" to some quirky 8-bit tunes and it would destroy the game. I'm guessing here because it will never happen. Maybe it's actually a good thing you don't remember the soundtrack. How often do you find yourself shopping in a grocery store without noticing the music playing? There is some solid science behind that. Maybe nowadays it's more like Elevator Music? In that case the author of the article is right. We won't remember it. But is that always a bad thing? If the music blends in with the game it at least fits.

It also has to do with our brains of course. Just a few beeps and bops to remember. That's quite a bit easier than a whole orchestra. Add the fact you heard them over and over again and it's no surprise you will remember them till the day you die. It's the same with shitty pop music. Simple, easy and usually stuck in your head whether you want it or not. But you do remember them. But wait a second, does it really have to do with it being a full orchestra? I'm pretty sure every body and their mom can hum a few classical orchestrated pieces written by Beethoven, Mozart and the like.

What about the amount of games and music in general? I didn't have as many games as I own now. Just the few games I bought after saving for months. So when I played Super Mario as a kiddo all I listened to was that. For a hell of a long time. Over and over again. Today we take our music with us and listen to many different songs throughout the day. Put a single modern soundtrack on your iPod and I will guarantee you will be able to remember them.

What would happen if I let a 10 year old boy listen to the Sonic soundtrack without ever having heard it before? The kid might think it sucks. To be really sure the soundtracks from this day and age are forgetful and rubbish we should ask this generation again in 10 years.

In conclusion, I think older soundtrack were awesome but not necessarily better. We played games and therefore listened to the soundtracks in a different way. There are always exceptions to every rule which isn't different with video game soundtracks. Some of them really stand out, no matter if you hear them more often or if they're easy to remember. Nobuo Uematsu for instance really is that much of an amazing composer.
#ShareonCommunityBlogs
Login to vote this up!