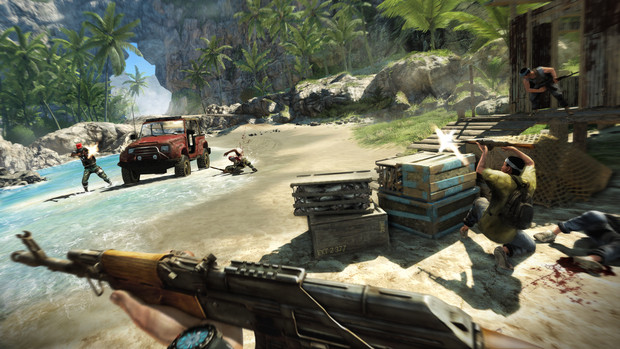 So here it is number 1, my favorite game of the 2012. Far Cry 3 is without doubt my biggest surprise this year, as I completely forgot about it until a few weeks before its release. This game has been called by many "Skyrim with guns" which is a fair comparison, but for me this the type of experience I wanted from Skyrim in 2011 but did not receive. Far Cry 3 gave me an open world, but not too huge it seems like a chore to explore. It gave me a variety of options when approaching enemies, and made each one feel like a good option. It gave me a great story with fantastic characters, and it did all this in a game that looks amazing and plays just as good as any other top shooter out there. This game had so many "Oh shit" moments for me from using a flamethrower on a cartel's weed field, to unleashing a tiger onto a group of pirates and then sniping them as they ran away. All round this game just worked for me, I felt like enough of a badass to take on 5 pirates with an assault rifle, but at the same time felt slightly intimidated when approaching a bear or a shark. My only complaint with this game is that I wish I got to see more of the best character of 2012 which was the villain of Far Cry 3, Vaas Montenegro. Now although this character was basically like most other bad guys in movies today in a post dark knight world, the performance given by the actor who played Vaas (Micheal Mando) was so good that seeing him in real life is actually quite terrifying. Going back to Halo 4, I said it wasn't the best because it was extremely well made but it did not amaze me, and Far Cry 3 did just that. This game deserves to be played by so everyone as it provides a technically impressive, mechanically sound game with great narrative that each player seems to have a different experience with. For the reasons listed above, Far Cry 3 is my top game of 2012.
Login to vote this up!