Once upon a time, people liked Konami. The split between Kojima and Konami looks to be one of the most legendary of all time, going up there with the likes of The Beatles and Britney Spears/Kevin Federline. But we're concerned with this bad press for Konami because they made great games. And when I was a kid, none was more confusing and more gratifying to rematch than The Legend of the Mystical Ninja, though it's more readily known in Japan as being a part of the Ganbare Goemon series of games. Mystical Ninja was one of the many games that was well known for it's classic splash screen of a laser passing over the screen and revealing the Konami logo after a snappy sound effect.

If it wasn't already apparent with its confusing localization name, I didn't understand the game at first on nearly every level. Culturally I didn't understand why I was beating up guys wearing octopus masks or straw hamper baskets on their heads. Mechnically I didn't realize the game has both RPG elements and more straight forward platforming gameplay. This was all compounded by the fact that I usually only got to play this game by visiting my cousin, who was the superior gamer in my mind with a robust collection of games spanning across a shelf and dozens of magazines with all the latest reviews, previews, and spikey headed fun factor designations. What's an 8-year-old to do? Git gud? NO. Play it short bursts when you're over and make little to no progress in understanding the game beyond, "Why is this guy getting so mad at me for not buying anything?"

As a child, I was just enjoying the flash and none of the substance. Move forward, hit stuff, die a couple times, game over, start again. It was frustrating to be sure. Goemon can't exactly take a lot of damage relative to the length of an entire stage (both town segment and action segment), and there pretty much zero mid-level health drops. While Mario can get multiple mushrooms in a level when his previous safety net gets used, your safety net in MN is basically your hands as you struggle to break your fall with your wrists. At least, that's how I viewed the game back then. You'll ocassionally grab a power-up to increase the range of your weapon, which is a godsend when the game can be ball crushingly hard. Grabbing a lucky cat turns your dinky pipe into a longer pipe until it becomes a chain of some sort. But taking damage reverts it one stage and this mechanic doesn't pad your health at all. Now imagine this torturous diffucult set against what might as well be a theme park that refuses to let you imagine the real world. This is framed in the context that an entire country's culture isn't a theme park but a collective, cultural identity. But lol Ebisumaru looks like a fat idiot amirite?

I've revisited the game several times throughout my life, each time understanding a little more about just how weird Japan is and how the true game mechanics are. For example, I started to get a better grasp of the in-game economy at work, such as buying armors to mitigate damage and help me get further in the level before getting frustrating and losing health. There are also the jutsu masters scattered throughout the game that give you powerful extra skills in returning for training and draining your health. As a kid, I wondered how I could ride an awesome tiger into battle or fly. I got a better understanding of seeking out the jutsu masters living in one of the random houses during the town phase. And now as an adult I see that the jutsus are rather tedious and one sided. You can only use the jutsu for the given level, jutsu dojos aren't clearly distinguished from other houses, making the job of finding them more difficult, and the jutsus themselves aren't really that helpful to begin with. The tiger isn't really that great and flying is situational.

But the real centerpiece to enjoying the games are the main platforming levels and the boss fights. Over time I come to an urge to really replay Mystical Ninja only to find myself mired in a tedious town phase grinding for money, for items, for pickups. But getting to the platforming action segments make up the bulk of my good memories and good gameplay. The first few stages exemplify what little I knew of the wild side of Japan's culture with the first few stages. There's a graveyard with bamboo pungi pits, umbrella demons, living fireballs, and a ghost lady wearing the typical Japanese undead headband. Later on you enter a ninja stronghold filled with clockwork ninjas, flipping trap doors, and secret compartments dropping bombs. Next thing you know you're crossing a bridge infested with octopi and fighting a Japanese lantern tree? 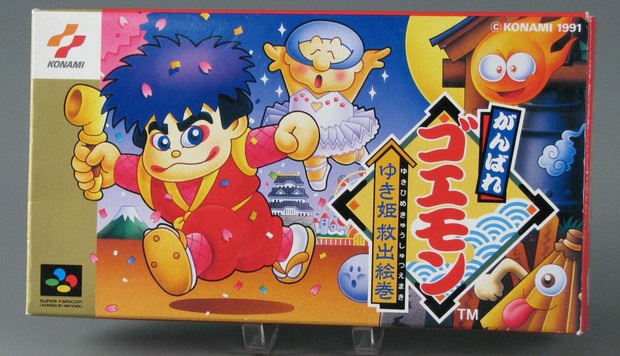 Even the box art typifies the usual Japan to U.S. localization attitude. The original Japanese art is happy-go-lucky, carefree, and utterly free of disdain. Just a ninja bouncing away from comical demons and his sidekick in a tutu.

Look at the American boxart and they made it borderline gritty reboot with an ugly ninja(?) riding a tiger staring down assorted weird Japanese monsters. Since when does Goemon wear a headband?

Oh Mystical Ninja, you're such a weird game. That's why it takes so much time and energy for me to completely understand you. But I'm glad I play you again and again at nearly every stage of my life just because I get a hankering for some Mystical Ninja. From the first time in elementary school, to emulation during high school and again in college, to finally just owning your virtual console release on the Wii U as an adult heading into the next stage of my life (marriage).

Thank you Mystical Ninja. You are so goddamn weird. 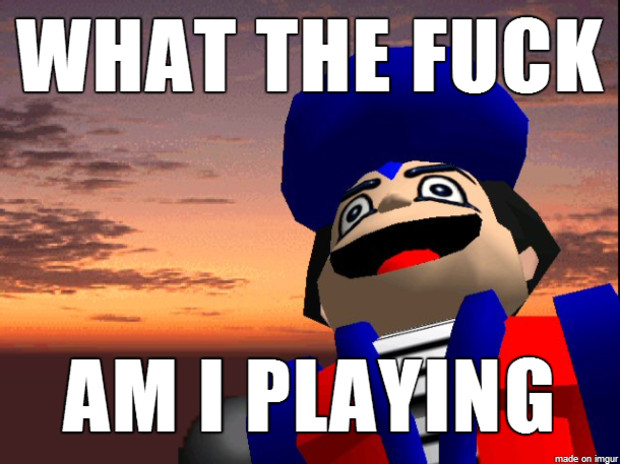