My (Other) Favorite Game - Castlevania: Symphony of the Night Ok, ok.  Look.  I couldn't just choose one, alright?  It's like choosing your favorite puppy out of a litter.  Plus, it's not like I chose a different title in the Final Fantasy series.  Enough with the justification, however!  Have at you!

It would be a fool's errand to try and rephrase what so many reviewers and fans thought makes Symphony of the Night so great. Instead, I hope I can relate to you why this title is not only my favorite of the entire Castlevania series, but one of the most expertly crafted and entertaining games I have ever had the privilege of playing. High praise? Yes. Now let me tell you why it's so special! 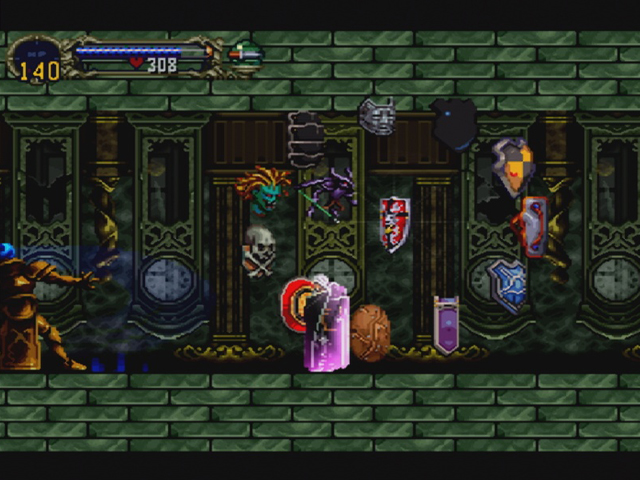 First and foremost, look at it! Look at those delicious pixels! Symphony came out in time when many developers were trying to push the 3d capabilities of the PlayStation to its limits. Seeing something that at once looked both classic and refreshingly new just blew my tiny brain to bits when I saw the first screens in EGM. I've always held a special place in my heart for high-quality pixel art, and this was the game that really lit the spark that ignited the blaze. To this day, I still sit wide-eyed at some of the empty chambers of the castle, drinking in all the detail, wondering who or what called these rooms home before Alucard arrived.

I can't think of many games off the top of my head that have created worlds that feel so alive, even though the backgrounds are mostly static. I will always lose myself in the seemingly-endless corridors of the Long Library, gazing wistfully at the untold volumes that surround its walls. The juxtaposition of enchanting beauty with the repulsive horrors of the night is nothing new to the series, but I feel like Symphony is its apogee. 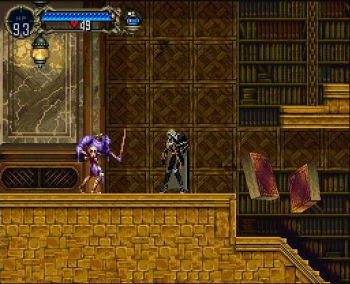 To talk of the beauty of Castlevania is to talk, also, of its score. The series has always been known for its fantastic compositions, and Symphony stands tall as the high point in the series. Here, I find what I consider to be not only some of the best cuts of any Castlevania title, but the best of any game period.  The expansive nature of the game itself could have been considered a challenge to score, but Michiru Yamane not only accepted said challenge, but blew away all expectations. Every track, from beginning to end, oozes the charm of past Castlevania titles while still confidently stepping in a bold new direction. I think that, had the core gameplay not been so drastically changed, Symphony may not have had the soundtrack we hear today. It was precisely the drive to do something familiar yet different that pushed the soundtrack to excellence.

I am simply in love with this soundtrack, specifically the way that it makes me feel. I can't think of a game that does a better job of invoking an emotional response from the player that is unique to each area. Every Castlevania fan expects the Clock Tower to be a punishing experience, and the accompanying track "The Tragic Prince" is a pumping hybrid rock/symphonic tune that seems to surge and climb as you ascend the deadly, trap filled tower. Conversely, "Abandoned Pit" seems as empty and desolate as the area in which it is found. The track seems to creak and groan, like some old corpse, as the sounds of bats, frogs, and the faintest drips of water (or is it blood?) echo in the distance. Similarly, "Crystal Teardrops" is the perfect accompaniment to the Underground Caverns, a cold, ghostly aquifer home to frozen shades and Charon, boatman of the underworld. The ethereal synths evoke the chill of this icy tomb, a setting that is at once both haunting and beautiful. I could go on, but I would highly suggest you check out the soundtrack on your own time. Not only is the OST phenomenal, but it spawned one of my favorite videogame remix albums of all time, Symphony of the Night Resurrection from the one and only Bad Dudes!

I feel that, all things considered, Symphony has some of the most enjoyable gameplay of the series.  While Castlevania was originally defined as a level-based, horror-influenced platformer, the move to a more powerful set of hardware allowed the developers the freedom to craft a world more reminiscent of Super Metroid in feel and scope.  This shift transformed the gameplay wildly, creating a new genre that still bears its name: Metroidvania.

The very nature of Metroid-style games has always had an incredible appeal to me. There is something magical about discovering hidden secrets and using new equipment to make further progress. The power of being able to finally open that locked door or grab that ladder that was just out of reach is intoxicating. It keeps the player glued to the controller and pushes them forward, always looking for that next fix. 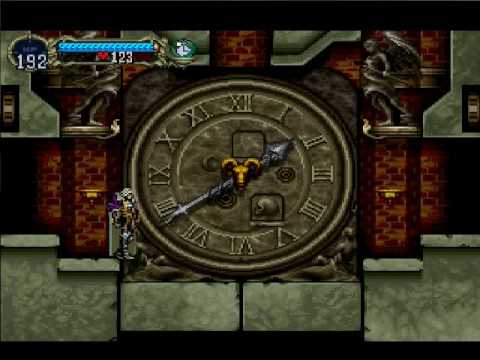 Now how do I get up there?

It should come as no surprise, then, that Symphony dug its bloody claws in me deep, by offering up a heretofore unknown sense of scope and scale to the Castlevania series.  With hundreds of different items, weapons, armor sets, rings, and relics, there always seems to be something new and interesting around every corner.  Not only do these treasures power you up and give you more resilience to face the dark, but they can change your appearance and give you new abilities to further explore the castle.  There is something incredibly awesome about turning into a fine poison mist and choking the life out of a Minotaur with your toxic fumes.  Couple this with an RPG-like leveling system, and you have the recipe for an addictive stew.  As tasty as that may seem, the fights with the minions of the deep have to feel right for a Castlevania to really click, and damn it feels good to be a vampire killer this go round! Here at Drac's Castle, we have the right items to give you the cutting edge against evil!  Hey!  Where are you going?

The actual combat system in Symphony is the most robust of any Castlevania before or since. While you keep the traditional jump and attack buttons, Alucard gains a host of other skills, like back-dashing, using a shield, throwing weapons, and even summoning familiars to help you in battle. What really got me all giddy was the inclusion of weapon-specific and character-specific special moves. By inputting directional inputs ala Street Fighter, you can unleash of host of different attacks, from teleport strikes to multi-hit rapier thrusts. It's mind-boggling just how much stuff is crammed into this game! I'm pretty sure that with all the different permutations of gear and the randomness of the item drops I've never played through the same way twice. Talk about replay value! If, after all this, you don't understand why I love Symphony of the Night so much, then I highly suggest you go out and try it for yourself! Currently, you can only find the original version of the title on Xbox Live for $9.99. For those of you who are on PSN, however, you can pick up Castlevania: The Dracula X Chronicles for the PSP and Vita, which contains a re-mastered version of Rondo of Blood and an unlockable version of Symphony complete with new voice acting and dialogue! There's no excuse to not give it a shot in this day and age. I mean, you have to have heard someone, somewhere talking about how great it is, right? So what are you waiting for? Go play it! It's my (other) favorite game of all time, and it just might be yours, too!

Hiya! I'm just your average joe who loves to play the vidya games. My earliest memory is playing Super Mario on NES when I was 3. I have a sizable collection of games spanning the decades. I love my Super Nintendo more than some of my family. I remember more about games I've played than my own past.

I think I have a problem.