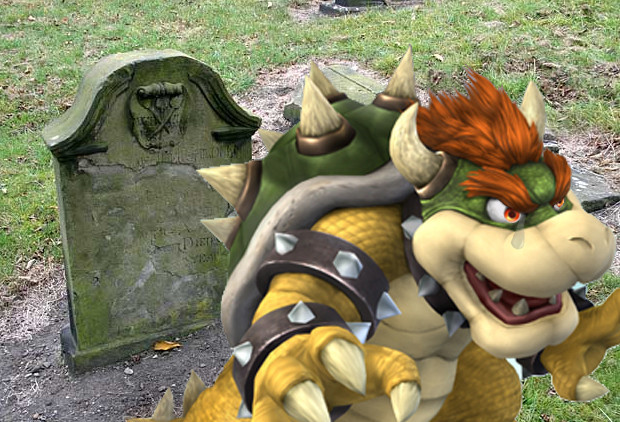 �Pixels to pixels, stats to stats��

The priest�s words washed over Bowser along with the rest of the congregation. Like them, he paid the funeral speech little heed. It was one too many deaths in a long, bloody, seemingly unbreakable chain. Granted, a particularly heartbreaking death, one which reverberated through the bosses� small, loose-knit community like the shockwaves of a type-three ground pound attack.

Bowser raised his gaze, and fixed it upon the tall tombstone at the head of the grave. He was too far away to read the writing, but the carven wing once again destroyed his hopes that this was, somehow, some horrible mistake. Shining, graceful, climactic, Sephiroth had been a shining exemplar amidst the numbers, someone all young bosses aspired to be. Mooks and grunts across genres would have killed for the chance to serve under him. And he had been Bowser's friend.

Someone else was speaking, a new voice extolling the virtues of the recently deceased; Sephiroth�s sequel-sister, Ultimecia. Her voice shook with emotion as she delivered a moving obituary. Bowser half-listened, consumed with a slowly rising wrath. He himself had barely escaped death at the hands of Mario time and again. Countless times. When would the fool learn? Peach had no affection for the fat plumber, hadn�t had in a long time. Couldn�t the idiot just accept this was part of the normal way of things? Bowser was sick of living in castles filled with magma pits and death traps. Peach, though she looked rather nice by firelight, wanted to live somewhere light and airy, with a kitchen-garden perhaps. Bowser couldn�t blame her. He wanted much the same thing. Okay, maybe with just one or two deathtraps, but they�d be in a shed next to the garage, put there for old times� sake. Then the two of them could settle down; no more castles, no more villainous fortresses.

Something had to be done. It really did. Legions of goombas and koopas had failed to even slow Mario down; that infernal man never gave up. And try as he might, Bowser could never take him out; it was as if Mario knew exactly what he was going to do at all times, evading each and every attack by a bare whisper. Luckily, Mario seemed to believe the finest method of attack was to jump on your opponent�s head time and again, and so Bowser mostly only suffered migraines. It was bad enough.
The funeral ended. Slowly, the crowd of mourners dispersed, a throng of everything from gun-toting assassins to giant furred beasts. Someone called Bowser�s name, and he turned, starting suddenly. An enormous, dragonlike visage hung in the air behind him.

�Robotnik wants to speak to you,� Hydra said. �He�s where my right head is. Are you coming to the literary society meet this Thursday?�

Life moves on, I suppose, Bowser thought. �I�ll be there,� he said wearily, moving off in the direction of one of the titanic creature�s other heads. �Thanks.�

�No problem. See you then. Also �� Hydra lowered its voice sympathetically � �I know he meant a lot to you. Take it easy, okay?�

Bowser nodded briefly, not wanting to discuss his attachment to Sephiroth any longer. The two had been childhood friends, and had even studied at the same university � Bowser doing Fortress Architecture, which was how he�d met his castle-inhabiting Princess in the first place, and Sephiroth doing a joint course in Dramatic Flair and Evil Nemesising� even then, he�d always been a high flyer. They�d eventually parted ways, as Time has its way with even the greatest of friendships, and gone on to careers in different genres, contact slowly dwindling between them. The separation had pained Bowser more than he liked to admit. More than anything, he wished he�d had the motivation to write to Sephiroth one more time � maybe meet up, reminisce about the old times. Ha, like that one night out in the Pit, where Seph got so drunk that he �

�Bowser.� It was a statement more than a greeting. Bowser and Robotnik didn�t normally get on all that well, despite having very similar work situations � frequent headaches and all. Robotnik was too obsessed with his scientific studies to have ever learnt how to communicate properly with people, and was known for his inability to check whether Bowser was around before making lewd comments about his wife. I guess I have to tolerate the man for now, Bowser thought. I can deal with this maturely and move on.

�It is time something was done on this matter. I know you were close to Sephiroth and hope you agree with me on this.�

Bowser nodded, irritated at the doctor�s brush-off mention of the deep bond he and the One-Winged Angel � as he was already being referred to � had once shared. �As a matter of fact, yes, I think it was time we stood up to these Characters properly. How though, I don�t know.�

�It is simple, when you think about it.� Robotnik stroked his massage, clearly excited about this idea. Probably another wacko gadget that didn�t work, Bowser thought grumpily. �We ally.�

�We team up. A character may be able to take on any of us one-on-one and survive, but there�s no way that either of our respective nemeses is going to run into you, me in a vehicle, Hydra and that bloke over there with a sniper rifle, and still come back for more. I�ve spoken to some others about this already, and they agree with me. If I get enough interest, I�ll go public with it and we can beat these eggheads down. Are you in?�

Bowser considered. Gradually, he warmed to the idea. This didn�t sound like a harebrained scheme at all, actually. As long as Robotnik didn�t spend the whole time trying to eye Peach up, it would be worth joining forces � especially with a couple of other bosses too � to give Mario the definitive message that things between him and Peach had been over years and years ago. �The princess is in another castle�, indeed. Never got the hint, did he�?

Back to the matter at hand. Bowser cleared his throat. �It� it could well work,� he admitted, surprised to be actually saying this to Robotnik. It wasn�t something that happened often.

Robotnik nodded energetically. �Thanks. I�ll send you a departmental memo or something to arrange a join-up, even if this doesn�t go public. That blue sonofahedgehog is going down hard.�
#Community    #OpinionEditorial
Login to vote this up!