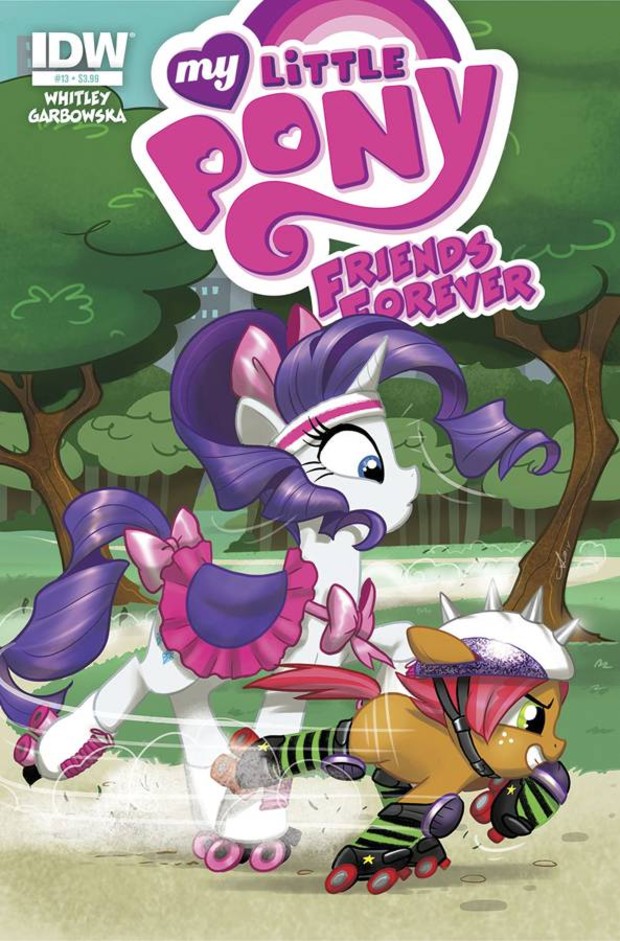 In this issue we have Rarity not realizing the wants of others until it’s smacked in her face, which as much as I love My Little Pony (and I do love it) it seems to be a pretty common theme of having them relearn the same lesson a few times over. Now that doesn’t make this issue bad, far from it actually, the jokes are great and the character interaction between the characters is amusing as well. The ending is adorable and even though it retreads common ground it does it in a way that feels fun. Plus we get fan favorite Babs Seed whom we haven’t seen in the cartoon since season 3 although we have seen her a few times in the comics so that’s good. It does strike me as strange they haven’t brought her back in the show with how much they built upon her character. 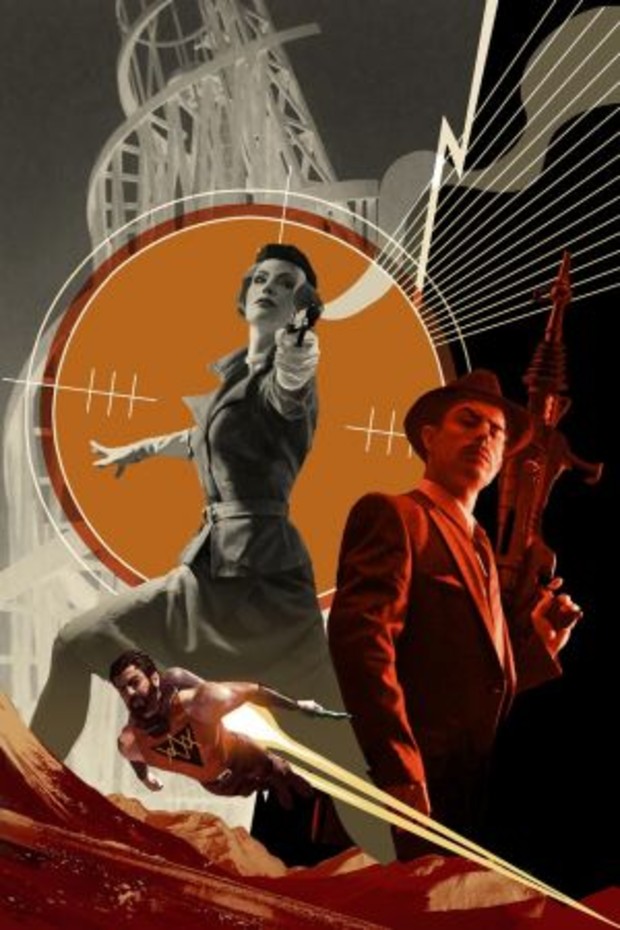 We have a new mini-series this time with Operation S.I.N. which I’m assuming is supposed to give us more backstory on Original Sin, which was an interesting story but spanned quite a few comics so I wasn’t able to collect all of them sadly. Marvel seems to do that frequently, either you have all of their comics or you’re missing part of the story, which is interesting but I can’t do it frequently because of how much it costs much like how with Spider-Verse it costs a fair amount more.

But anyways… with issue 1 of Operation S.I.N, we have Howard Stark interacting with Peggy Carter on a mission that we have little clue as to what it is as of yet. We get a little bit more of an inkling at the end, but I don’t want to spoil it for anyone since it’s pretty amusing. I will say however that Howard Stark does seem to act more like a gentlemen than Tony but the two are pretty similar which is amusing. It’s how he got Peggy involved in the first place, something that will possibly come to bite Tony eventually because he thinks he’s always right but may miscalculate one of these times. Possible prediction as well for Howard. 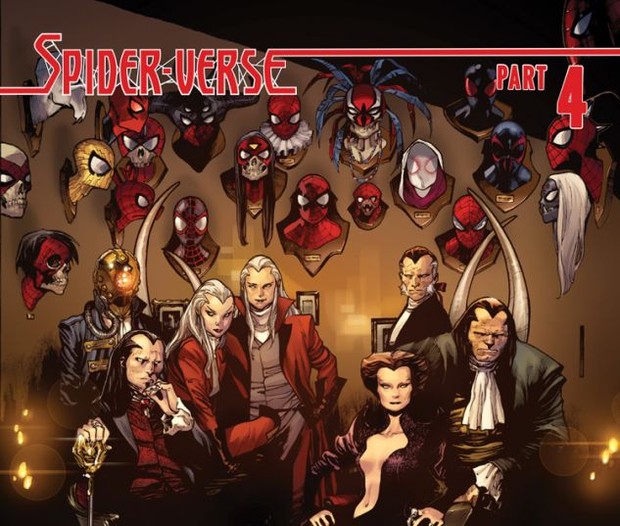 Things start to finalize in this issue of Amazing Spider-Man 12, a few Spider-People still die this time but, it’s not anyone we’ve really learned about. They seem interesting however theirs a Bushido Spider-Man and what appears to be an Aliens Spider-Man. Oh and Spider Voltron makes an appearance, that was pretty cool. Voltron died nearly instantly but the Spider-Man inside did not which I was thankful of seems an intriguing character. We also get some more story as to what may be going on, something that involves The Bride, the Scion, and the other again. Still not certain what the importance of that is but I suspect that we’ll find out soon enough. We also get a talking Spider-Man car, that is similar in design to a cart but it seems to have rather decent intelligence. Silk also discovered a world an issue or two ago, remember the irradiated world? That’s the safe point for the time being, dangerous to Spiders but even more dangerous to the hunters. This whole thing keeps getting weirder and weirder. And I love it. 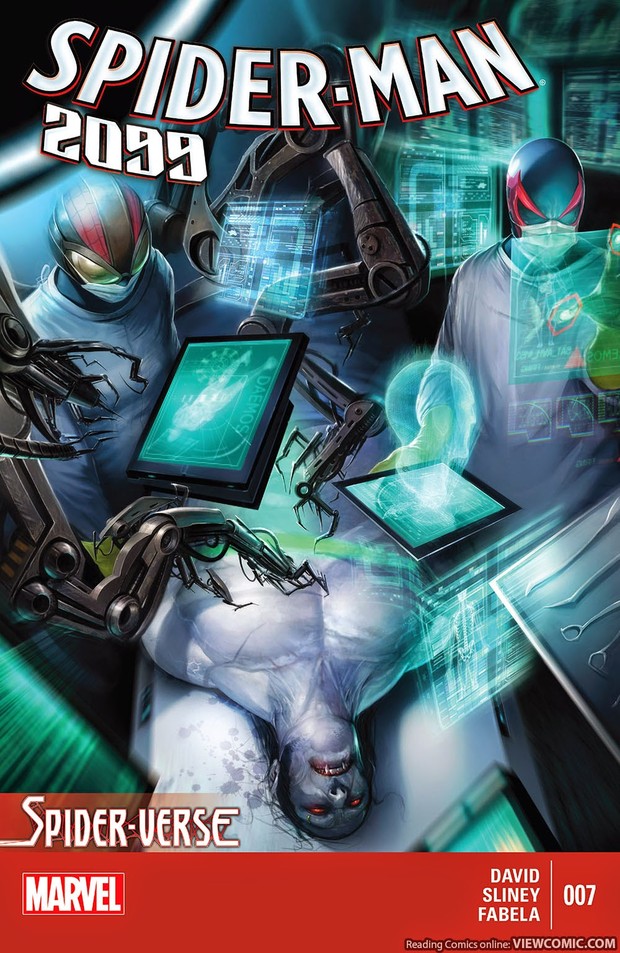 In this issue Michael O’Hara finds something that could be very beneficial to helping defeat the hunters, only problem is we don’t know what it is. Never revealed, but it could be one of the things that turn this war, since they seem to have a few things going their way which is good. We also find out that surprise, surprise when you can clone yourself you’re willing to kill yourself to break out of a trap that will kill you otherwise. 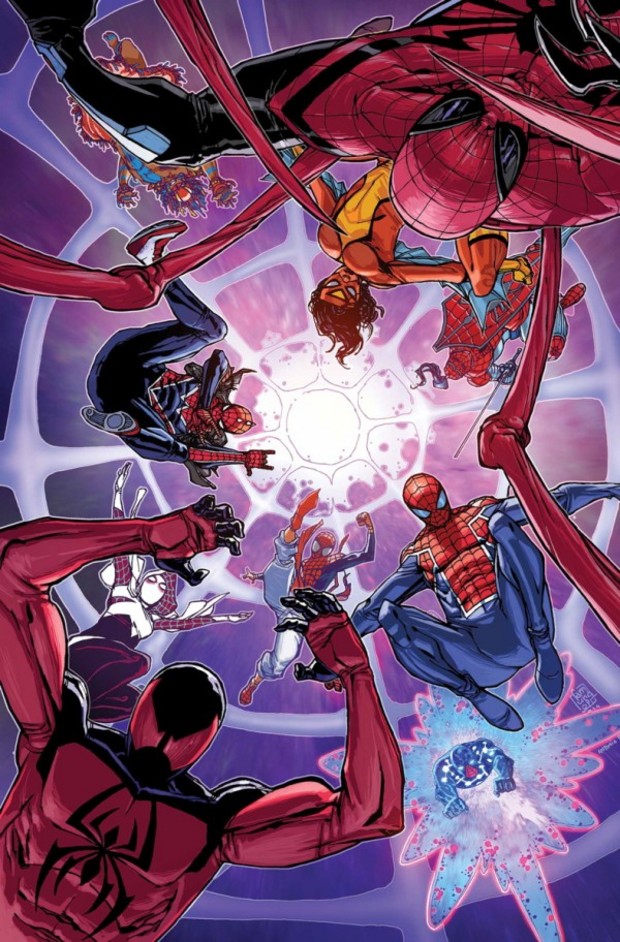 So… we have a multitude of different Spider-People again and I enjoy them. Most of them. Want to know the one I don’t enjoy? The one that’s written in Spanish and we have to download the digital version, I buy the comics in comic form because that’s the way I prefer it. Otherwise I’d buy digitally; admittedly I have been considering digital because it’s better for the environment but… than you don’t technically own them. Why do you have to download the digital version you may ask yourself? It’s the one in English. That seems… strange to me. I don’t dislike it, but what I would’ve preferred is possibly just have it back to back the same thing one in Spanish the other in English. That would have been fine. We also get to see Punk Spider-Man’s back story which is just as punk as you’d think it would be, and it’s pretty amazing honestly. My personal favorite however was the one where they get actual Anansi to come help them. I love Anansi’s stories, and they play off of that pretty well here. 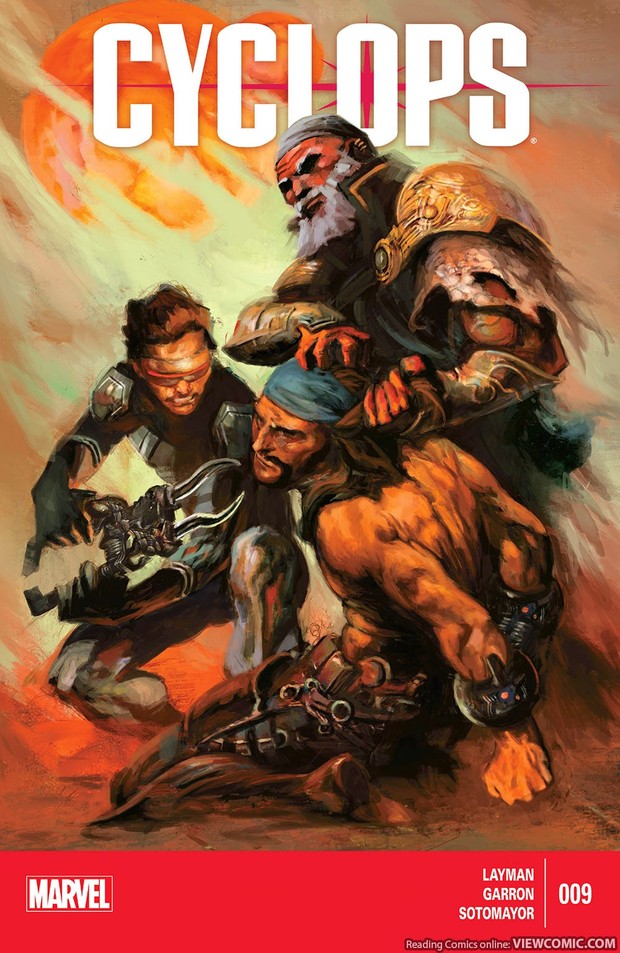 In this issue we find out that not to surprisingly Scott has in fact NOT been torturing his dad, surprise surprise, isn’t actually torturing his dad he’s faking it. For some reason they decided to let him torture him by himself with no other shipmates. Not… not quite sure WHERE the logic is in that but okay. We find out that Scott has come closer to the captain’s daughter and quite possibly has feelings for her; the captain also seems to have taken a shining to him and given him his own mission. However, first mate doesn’t trust Scott and starts to snoop around. We also find out that the Shi’Ar have been following them since they stole the Starcracker and ambush them at the meet up. 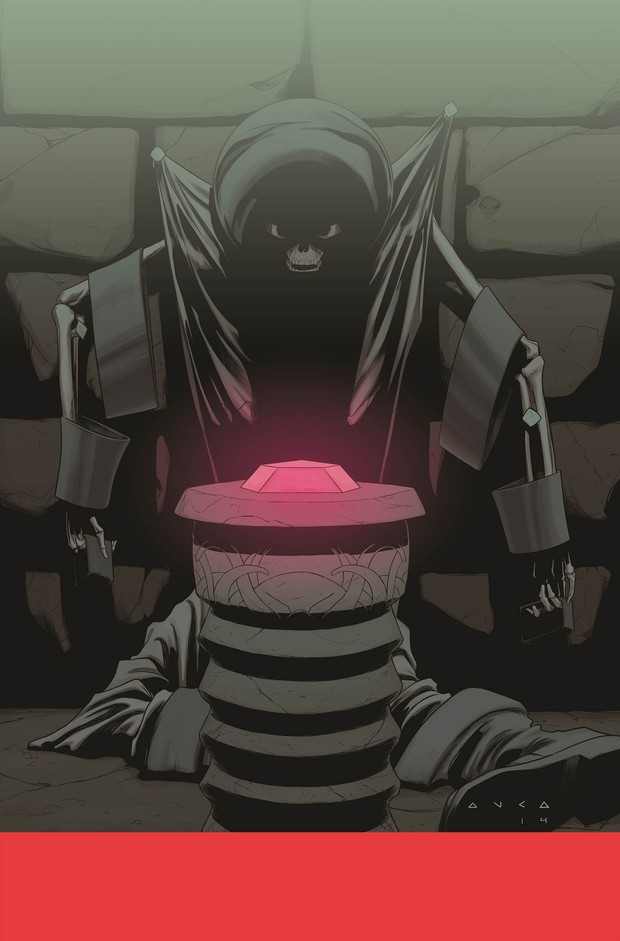 So… apparently Wolverine died. Again. In a different comic book. So… not entirely sure how, when or why but he’s dead again for now, not sure when he’ll come back. But… anyways with this issue the gem that powers Juggernaut has found its way back to Earth and is calling on people to become Cyttorak’s next avatar. That’s what the Juggernaut, was an avatar of Cyttorak. Which I knew he touched the gem and became Juggernaut but I’m not certain we knew whom it was from before. However I could be mistaken. We also have Storm not trusting Colossus because apparently he’s made a few to many mistakes… in other comic books. As much as I love comic books it’s a little frustrating to not know everything that’s going on, you have to choose which one’s you want for the full story so I mainly only get Spider-Man’s full story since he’s my favorite. Small gripe since I know they do this to encourage more comic book sales but a little confusing. 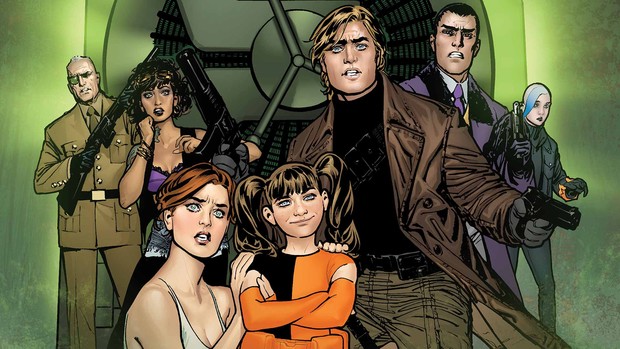 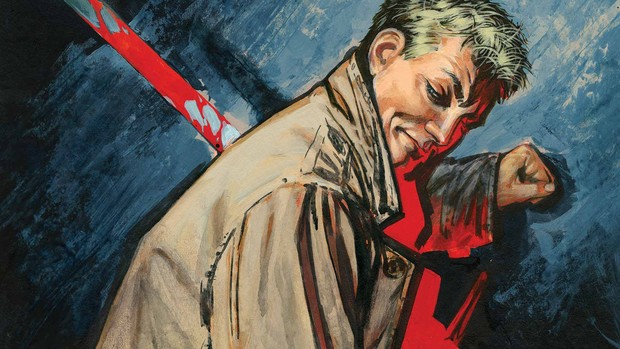 In this issue Fifty Sue finds the vault that they’ve been looking for while the island is being combed over, pretty impressive she was able to find it undetected, even if she does have a lot of super powers. Franky’s still dying from the Nth metal inside of his body, but removing it now could be potentially harmful (or at least that’s why I’m assuming it hasn’t been removed) Plastique makes a move on Terry, which I actually find pretty cute. They seem like they’d make a decent couple. We also find out that Smallvile might potentially be evil, but that hasn’t been explained yet.

Firestorm is trying to redo Dr.Yamazake’s teleport plants, that way they can separate and not be a part of one another anymore. After having to deal with each other for so long it starts to get at you which makes sense. Terry finds Tim Drake, while having the Batman of this time watching Terry and Plastique as Batker Bot decides to make a return appearance right as Terry finds Tim. Then it ends, which makes me excited for the next couple of issues to see how that plays out. We further delve into Constantine not being much use as he says that Franky needs to go back to Dr.Frankensteins Castle as well as telling Superman that maybe Brainiac will be here maybe he won’t. We also get some foreshadowing with eyes coming out of the cornfields of Smallvile. 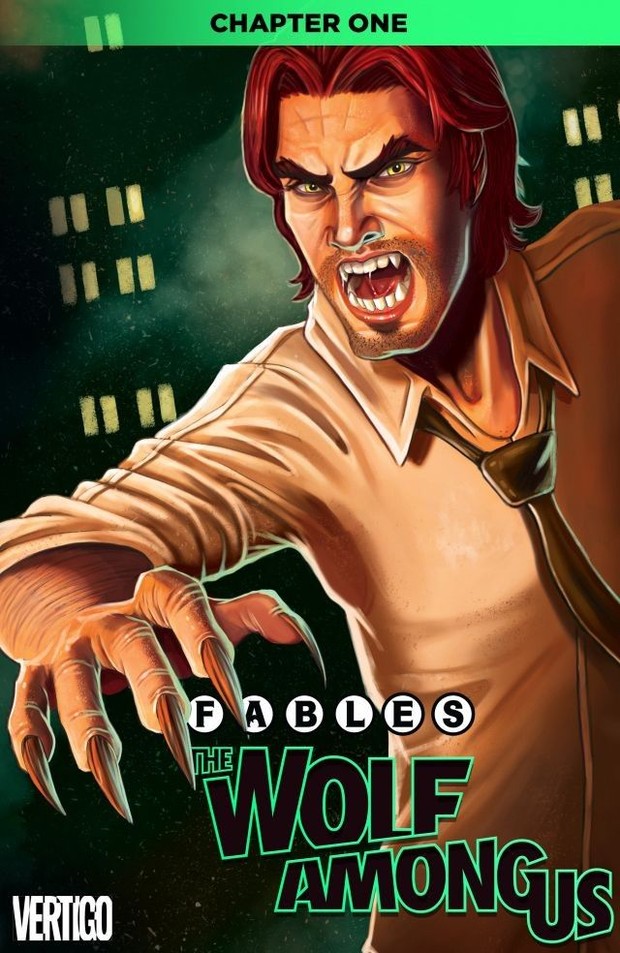 With this one we have a comic book retelling of Telltales, The Wolf Among Us season 1. Which I find interesting since this will technically give us a cannon choice as to what was supposed to happen in the games won’t it? I personally prefer my Bigby Wolf the way he is so I’m curious if anyone will go back and replay the game in anticipation of Season 2 to make it more cannon. But it’s pretty much the same as TWAU, and I loved that series so it’s interesting to see the cannon choices as well as the little bit of extra story they’re adding in here and there pretty neat. It’s been available digitally for a while but just not got to releasing it in paperback form which is fine. The art style is interesting too and I really like it, can’t wait until I get to start Fables since the next issue should be a part of the next roundup. As for the story I don’t want to go too far into it mainly because it would be ruining not only the comic but the game as well. 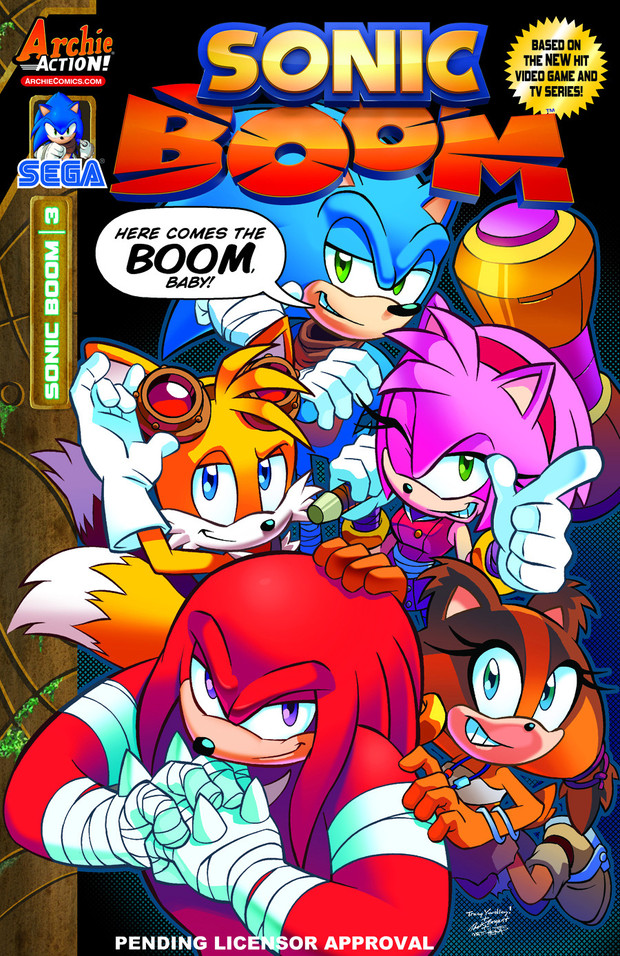 As much of a flop as the Sonic Boom games were, the comics are really starting to warm up to me, I feel they’re pretty well written they’re funny and overall just silly. It’s my kind of comic if it’s not going to have an overarching story, which technically Sonic Boom does a little bit but it’s not anything big or grand yet. That may be due to the fact that most of the time the other Sonic comics pull from the Sonic games, which makes me think what’s going to happen when the Sonic comics catch up to the Sonic Boom games. Are the regular Sonic comics going to cover the games or is the Boom series? A silly question but one that makes me wonder. Anyway, in this issue we have Amy realizing she lost her hammer last issue so Tails, Knuckles and Sonic goes out to try and find it while Sticks tries to find a new weapon for Amy. I was partial to the mace myself, similar to a hammer but it has sharp hurty points! Meanwhile we find that Cubot and Orbot have found the hammer (oddly missing from the games actually) and are now arguing over who gets the hammer since they both admit it’s pretty awesome. Eventually however Cubot and Orbot accidentally send the hammer flying into Robotnik’s machine that has been restored for the third time and somehow it then lands in Sonic’s hands right as they had given up. So… pretty Deus Ex machine but it was funny so I didn’t mind.