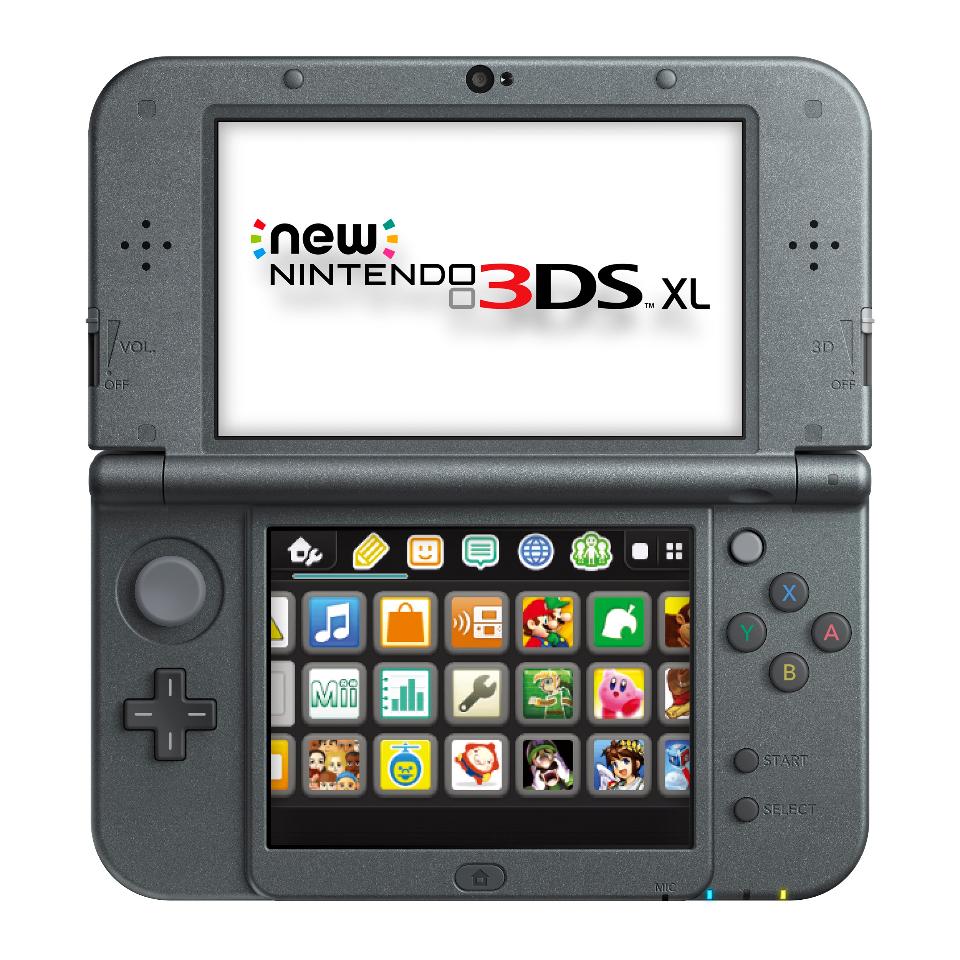 Recently Nintendo has forced me to go back and dust off my 3DS with the release of Metroid: Samus Returns. Having the Switch on day one my 3DS was kind of forgotten and tucked into a corner. I'm glad I did come back to it, since as it turned out it is one of (if not THE) my favorite systems of all time. Let me explain myself.

I will be specifically talking about the New Nintendo 3DS XL and if you own a different version of the system first of all: WHY?! Second, some of the things I'll write might not align with your experience if you own the smaller, inferior, peasants version of the 3DS.

Let's start with an obvious one. The library of games on this system is insanely huge and insanely good! Of the top of my head you've got top quality RPG/tactics games in the Fire Emblem, Bravely Default, Shin Megami Tensei and Steam World Heist series. You've got great platformers in all shapes and colors - fancy a 3D one? There's Super Mario 3D Land for you. Want some more challenge? There's Donkey Kong Country Returns 3D. Something classic? Sure, Cave Story has got you covered. A new 2D Metroid game? Samus Returns s'got your back. Want action? There's Star Fox 64 3D and Kid Icarus: Uprising for ya. Need to get some groove going? Rhythm Paradise Megamix will serve that purpose.

See what I'm getting at here? This system has excellent games a plenty! It includes the definitive versions of two N64 Zelda title's (according to many one of them is considered the bestest game of all timez), heck there's even a MGS: Snake Eater port, not a great one at that, but still playable. Have I mentioned the 3DS is backwards compatible? Yes, it will play any original DS game you dare  throwing at it no matter the region. Oh, forgot to mention the Virtual Console. Classic games on the go including GameBoy(Color), NES, SNES and Game Gear totaling at around 200! Then there are the M2's re-makes of classic titles like Outrun or Streets of Rage which are excellent! It's got Monster Hunters, it's got Animal Crossings, it's got Super Smashes... It is overwhelming and seriously I can't think of another system with as broad, varied and exquisite video game library as this one. I mean yeah, you won't find a decent FPS on here, but c'mon...

2. It can do other things too, but it's a focused device nonetheless

This is something I loved about the original DS, while the 3DS is certainly being more multifaceted it still retains the spirit of a purpose built gaming machine. You can make music with it (Korg has a great app for that), stop motion animation (photographed as well as hand drawn), record 3d video or sounds and a couple more things that every tablet will do admittedly better, but what I like about it is that it's first and foremost a gaming handheld. The controls are where they should be, the volume and 3d both have their own physical sliders and it's extremely efficient at what it's supposed to do. By comparison the Switch has  rocking buttons for volume adjustment and as there's no other way of telling what the volume level is it uses screen estate while you're gaming to display that information. Yes, it is a minor thing, but it only shows what kind of attention to detail has been poured into designing this console (the 3DS that is). What I also like is that the top screen is used exclusively for displaying the game. No system overlays, no fluff just pure action. It feels designed and built for the purpose of playing video games, the rest comes as a bonus. In short it is still a spiritual GameBoy successor.

Now bear with me. I know most people in games media tend to fall into the camp of: "I barely use the 3d, it's a gimmick." But (SPOILERS!) they are ignorant fools! I've seen it many times - dude takes the console into his hands, waggles it around until the 3d is out of whack and switches it off dismissively, forever. I say, for the most part the 3d is awesome! It's getting some flack now as the 3d hype is long gone and people love to hate on it, but trust me it will be remembered as one of it's kind, more like something magical, something special and out of ordinary than a Virtual Boy of twenty first centurys early teens. Now for the record I play most of the games with the 3d turned on, even 2d titles like Cave Story or Fire Emblem: Awakening, and I wish some people would do the same as this might be the reason why they keep complaining about the lack of resolution and generally lackluster graphics. Yes, the 3DS was never a powerhouse and the texture detail is on the lower side (as is the res), but the 3D effect gives the image depth and clarity unseen on other systems. It's as if you were actually looking INTO the world of the game thru a window instead of looking at a window surface the image was being drawn on. And this comes from a PC guy, so you know I like me some good graphics, but the little 3DS teached me there can be something more to the visual appeal of a game than resolution, anti-aliasing, polygons, heck even art-style. I don't know, maybe it is magic after all...

Magic or not let's get thru some usability aspects. In the New 3DS systems a camera tracks your eyes movement so the 3d is being adjusted to the position relative to your face. It works great for the most part as long as you're not weaving the console around as if you were jerking off. Also I've noticed with my friends if you wear hipster glasses with a wide, dark frame it can confuse the system so bear that in mind. Another thing to keep in mind is when you look away from the screen the 3d goes bonkers, but looking back onto the screen it takes roughly 200ms to re-adjust and everything is fine and dandy again. Other than that it's great and it works as intended even in the dark. Basically this is how it should have been from the beginning and even Nintendo knows that.

4. It feels personal and low-key.

I know it might not be much of a thing for you, but there's something that draws me to it. It just feels like a friend of mine. I mean, the Switch for example is supposed to be shared, it is design as a social experience. The 3DS not so much though and I quite like the introvert personality. It feels like it's always there, waiting for me to take it on a commute, camping or a long trip - just toss it in my backpack and there it is. It also suits short gaming sessions much better than a device with an unprotected screen - you just close it down and it pauses your game. No fiddling with buttons or switches, God forbid software, just a simple and satisfying gesture of closing/opening a book. At this point it is also prevalent enough that nobody notices it in public, which is a plus if you ask me.

5. It is probably the last of it's kind.

The clamshell, dual-screen design has been with us for just two generations of handhelds and it already is being phased out with a more of a tablet form factor that Sony has been pioneering for a while and now Nintendo has given it a go. It's understandable, it requires less labor and is generally more cost efficient to produce a tablet like device, however the dual-screen layout has it's advantages. Two screens equals more screen estate to utilize for things like a map or inventory in a game and it really makes the difference to have it on the bottom screen at a glance. Also another scenario where this is superior to single screen is touch screen games - one still can get the full games presentation on the top screen while tapping on the bottom one without obstructing the image. The clamshell design on the other hand prevents it from getting unwanted screen scratches and in general I'm not concerned with throwing it casually in a bag without any case. It is sturdy, durable and I can attest to that - mine has landed on the floor a couple of times already, not being folded too and it survived without any dents or functionality compromised.

It is also the system for which Satoru Iwata took a pay cut, so this has to account for something - pay respect to the man, go get that 3DS.

Some other things to consider:

The original 3DS's (the NOT New one's) are very slow in operation and they have no eye tracking technology, so the 3d effect is basically useless. While the New 3DS's are no speed deamons they are improved to the point where I would consider them perfectly usable for the purpose they serve + the 3d actually makes sense.

Nintendo's handheld traditionally are cramp city for many people (myself included), so while the smaller, regular New 3DS might seem like a more pocketable, more practical option in truth the New 3DS XL is the way to go. What you loose in pocketability (which, let's be honest, even in the case of the regular 3DS is not great due to the clamshell design) you gain in ergonomics and screen estate. While the XL is not perfect ergonomically, it is light years ahead of the regular model which is practically unusable unless you're a 5 year old kid.

The microSD port is hidden behind the back cover which gives you no other option than to grab a screwdriver and channel your inner tinkerer every time you want to take the microSD card out. In truth I had to do it once, so I wouldn't call it a deal breaker. It's a set it and forget it kind of situation.

If you buy the system new, it will come with exactly 0 chargers included, which only proves Nintendo has a peculiar sense of humor.

I cannot tell you much about it, but apparently the systems come with random panel types. Both of the units I have in my house-hold are IPS top - TN bottom types. IPS panels have generally better viewing angles and color reproduction. So when I view the screens at an angle of say 45 degrees I can clearly see the contrast and colors on the bottom screen are washed out while the top is still perfectly fine. Which got me thinking: Are those people that despise the 3d, owners of the inferior TN top panel type? Hmmm...

Thanks for reading! Have fun and play some more!