Fall Guys and P.T.- When Marketing Transcends Itself and Becomes a Phenomenon

The marketing business is an arena. Every film, album, artist and yes, videogame is trying to drum up as much hype as possible for its product, all of them desperate for your attention and your hard-earned money. More eyes on somebody else’s product means less eyes on yours. In the marketing industry, there is only one rule; kill or be killed. This constant cacophony of hype can make life difficult for we consumers. How am I supposed to know which film really is the next ‘Summer blockbuster’ or ‘movie event of the year’ when each and every one claims to be it? It’s enough to cause someone to opt out of it all just through sheer fatigue. I would posit that videogames are even worse for this. Literally millions of dollars that are spent trying to hype up the next AAA game. Our daily lives are saturated with targeted ads that are trying to get us excited about the next Medal of Honour or the next Sony PlayStation exclusive. All of them trying to hit a level of critical mass to convince you that you just have to play this game!

True hype is hard to achieve. A moment when a property- whether it be a film, game or other piece of art- truly crosses that point where everyone is talking about it is like capturing lightning in a bottle. It requires both the artist and the marketers to be at the top of their game; artists creating a product that knocks it out of the park and marketers successfully building anticipation to such levels that you truly can call the product’s release an event.

This has only happened twice in my lifetime. The last time is was when Avengers: Infinity War and Endgame hit the cinemas. The time before that was when The Lord of the Rings trilogy came to DVD. * 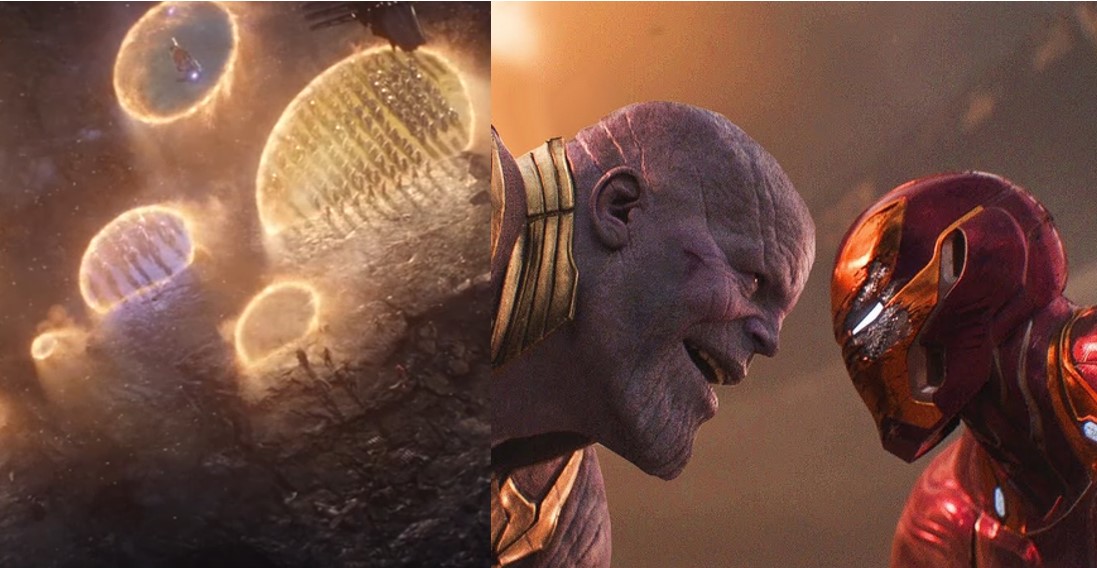 There was no way I wasn't going to see this day one in the cinema, and I wasn't the only one who felt this way.

I bring up these two examples just to show you how rare and unpredictable these moments can be (and subjective, please don’t think I’m undermining all the other amazing films that came out in this time.)

And yet, for me, one of these moments is taking place right now. Fall Guys was released this week and is absolutely tearing it up. The servers keep shutting down as a result of the massive influx of players, which are way higher than developer Mediatonic dared to dream. A silly little game about silly little beans running through impossible obstacle courses has somehow managed to has captured the zeitgeist so completely that it is all anybody in the gaming sphere seems to care about right now.

How long that will last isn’t clear, but what is clear is that Fall Guys has reached critical mass. 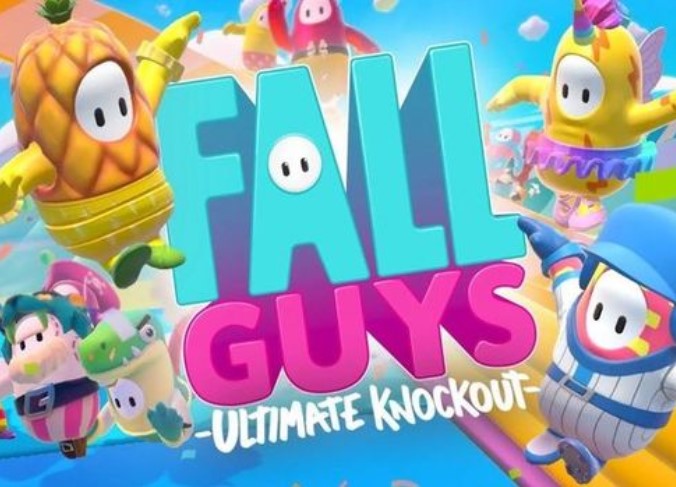 Play this game now, whilst the iron is hot!

You can put this down to a few factors, the biggest probably being the inspired decision to launch it for free on PS Plus (a move which follows the actions Psyonix, who used the same tactic in 2015 to drum up hype for their little game they thought no one would buy otherwise. A game called Rocket League.) But there is another very important factor that has led to this success. The fact that Fall Guy’s is doing so well is very much in part thanks to the game’s publisher, that wiley minx of the videogame industry called Devolver Digital.

Devolver Digital have been crushing it as a videogames publisher for a while now. They drum up an insane amount of hype for any game they release, to the point that just their name on the box has become implicit seal of quality to many gamers. The amount of care they put into marketing their products is heartening, and the way that Devolver go about promotion has transformed the publisher into a brand unto itself. 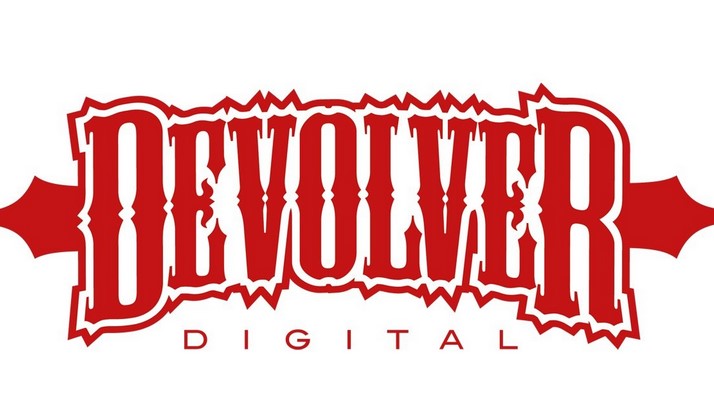 These guys are full on legends.

This cavalier attitude is on full display during their E3 press conferences. Their media briefings are, for lack of a better term, hallucinogenic fever dreams with some videogame trailers interspersed. People such as myself tune in just as much to be entertained by their Lynchian brand of comedy as much as for the game announcements. It's genius; even if I wasn’t interested in a single one of their games, I would still tune in. They have my attention regardless of what they’re promoting, and that is only good news for those products and the people making them.

It was during this year's E3 conference where the hype for Fall Guys hit fever pitch (their other games also fared very well, but that’s a story for another time.) But what was really special was what happened next. Devolver captured lightning in a bottle and pulled off a marketing stunt so inspired and subversive that it lent itself an ephemeral quality; a  blink-and-you’ll-miss-it moment in time that you'll never be able to recapture if you weren't there. If you would allow me, I would like to paint a picture of what happened on that fateful night between my friends and I as we were settling in to watch the show. Sat in front of our computers, chatting through Discord and already aware of Fall Guy's existence, we waited for the Devolver’s Adult Swim styled press conference to begin. 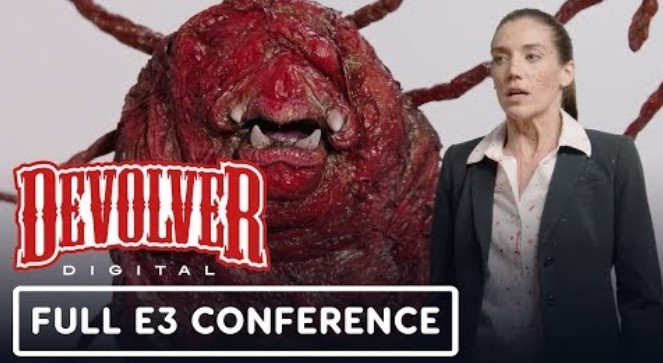 This is their thumbnail from last year. For a videogames conference.

“So, another Devolver Digital E3 press conference. So far, so insane. Carrion still looks like a day one buy. Woah! Shadow Warrior 3 looks sick! Fall Guys! I didn’t know Devolver were publishing that! It all looks so good! But honestly, this meta-advertising shtick is starting to get a bit daft. The madness is pretty much par for the course now. I think they’ve probably hit the point of diminishing returns on this style.”

Then something strange happened.

Devolver announced one more thing; Devolverland Expo. Was it a game? Was it a new form of advertisement? It’s a digital E3? Whatever was was, we couldn't figure it out, and Devolver was being intentionally vague. The only concrete information given was that it was called Devolverland, it was on Steam, and it was free.

Well said. And also, what the hell is going on!?

My curiosity piqued, I decided to mosey on over to Steam, unsure what I would find. Was this just another sly wink at the audience? Another piece of satire driven straight into the heart of mainstream videogames industry? Well let's find out.

“Wait, what!? IT’S THERE! And it’s only seven gigabites!”

“Get it!” My friends crowed in my ear. 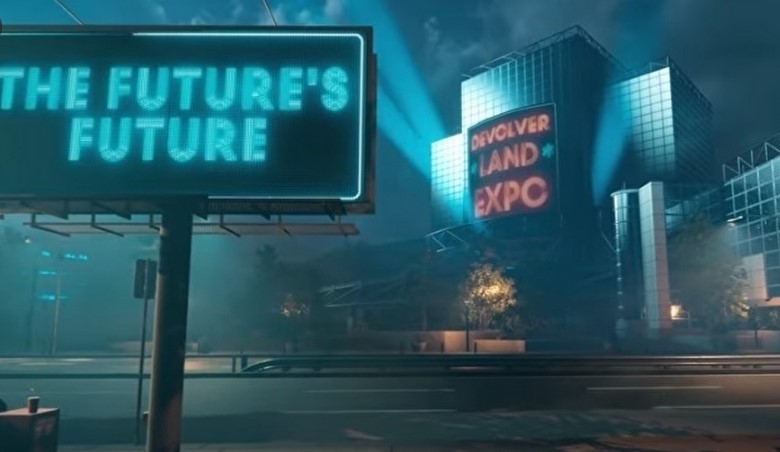 As if I wasn’t gonna bloody get it.

When the game begins, you’re stood outside of the E3 convention centre at night. There’s an atmosphere in the game that tells you something’s not right. And something seriously isn't right. But the game itself isn't that is giving off this feeling. It was the way that the game was delivered to us. The fourth wall between the conference and ourselves had been shattered and we were dragged unwittingly through the looking glass. The implicit relationship between viewer and presenter had been broken and we suddenly became full on participants in a game that was, more than anything, an unknown quantity. We were lost in the darkly subverted, blatantly hostile E3 convention centre. It felt like we had stumbled across a secret that we weren’t meant to find, like that we really shouldn’t be seeing this.

I won’t ruin the game itself for you, and to be honest I don’t even think it’s worth playing now. The game itself is fine (although special praise should be made to its presentation- it’s phenomenal) but the reason it felt so special, again, was not the game itself.

It was the way the game was unleashed upon us. After a crazy and honestly unnerving press conference, we found ourselves tumbling down an even more unnerving rabbit hole of a videogame that was equal parts Portal and Pony Island. 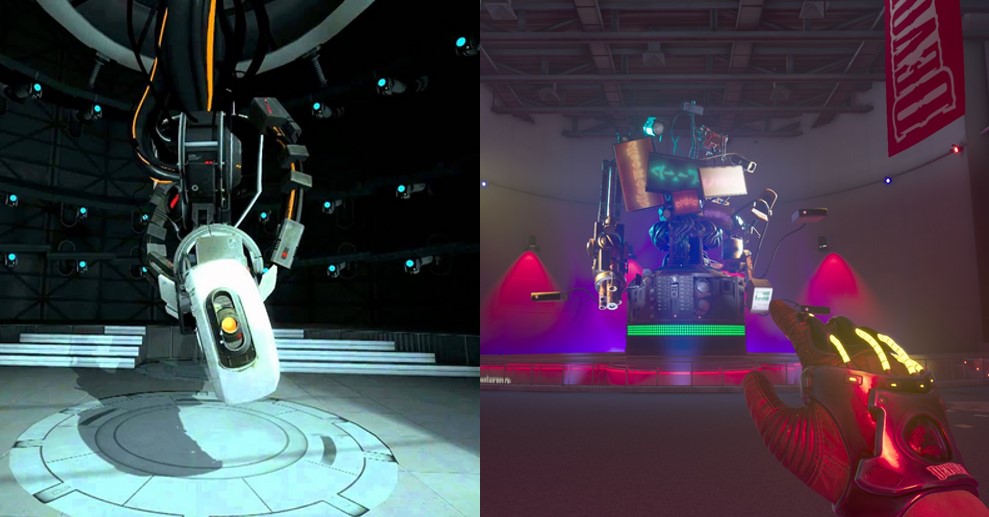 Which is very high praise indeed.

Moments like this seem only possible through the medium of videogames.** It’s our participation in them that makes them feel so special and so ephemeral. If you played Devolverland today it would never be captivate you the way me and my buddies that night. The same is true for Pokemon Go, it would be impossible to recapture those first few weeks where people were running up and down the nation in droves trying to catch a Flareon or a Weedle.

These events feel so special because they are of the moment; once it's passed, it’s never coming back. If you miss it, you miss out. You can play God of War for the first time today and it will still be as good as the day it released. The same goes for the Avengers films. But to recapture the magic of Pokemon Go and of Devolverland would require you to go back in time and feel the emotional response around the game. The hype and the discussion and the feeling of discovery were as much a part of the experience as the product itself.

I think that this is why the game P.T. is still etched so strongly in people’s minds. The game was flat out terrifying when it released. It landed as an unkown quantity and its maddeningly esoteric puzzles brought the gaming community together in a way that I’ve never seen before. The conversation around it and the collaboration between thousands of people was incredible to see. The gaming collective were in furore over it. 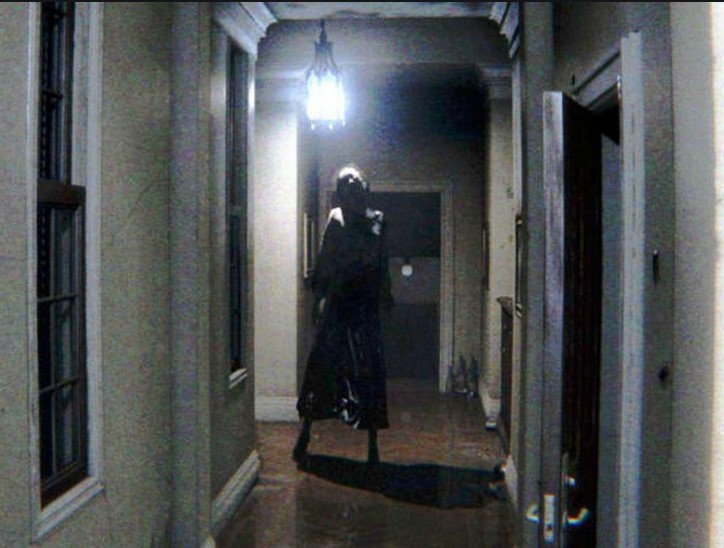 This game is now a legend unto itself.

And then finally we're hit with that pitch perfect reveal- Silent Hills. Oh my God. Directed by Hideo Kojima. OH MY GOD! Featuring Guillermo del Toro and Junji Ito as collaborators. OH. MY. GOD! Gamers lost their minds, we were all putty in Hideo Kojima's hands, and we had done it all to ourselves. This was our reward for braving that dreaded corridor over and over again. Silent Hills was so over with the crowd that it was all anyone could talk about. And then, very casually, the moment just... passed. For those who play P.T. for the first time today, they will still find a wonderfully well-crafted experience and scary experince and find a lot to enjoy. But they will never understand the amount of excitement that simple little gameplay demo unleashed upon the gaming collective.

I bought Fall guys the day before it released. I half expected it to have these server issues. The way this game was promoted was a masterclass in marketing. A silly little game was able to get over just by having a nice idea, the right publisher and through crafting an unforgettable experience as part of its marketing campaign.

I don’t know the formula to creating these strange, blink and you’ll miss it time bubbles, but I will tell you one thing. If you want to sell a product, they’re a hell of a marketing strategy.

*Of course this is subjective to me, and if you want you could also include Inception, The Dark knight and The Matrix to this list :P

** I do think that one key element to these kinds of experiences is audience interaction. If you would like to see an example of this done with the medium of TV, check out a 1992 BBC show called Ghostwatch and focus on how the show involves and then implicates the audience into its narrative. But be warned, it's a very eerie watch!