Lessons from the Bear and Bird

2:57 PM on 04.20.2013 (server time)    0
I spent a while pondering what I could discuss in my first blog post. The first post sets the tone for the rest of the blog and all other posts to come. A daunting task, to say the least. What would this blog be about? How serious should its tone be? What font should I use? After numerous decisions made and summarily rejected and multiple nervous breakdowns avoided, I decided the most appropriate topic for my first post should be my first game.

Banjo-Kazooie was my first video game, and it's still one of my all-time favorites. As I've played more and more games and become more aware of game design and theory, I've realized that Banjo-Kazooie wasn't just a fun game. It stands as a great example of game done right. There's a lot of lessons that modern games can take from Banjo-Kazooie. Below are what I consider the top five. 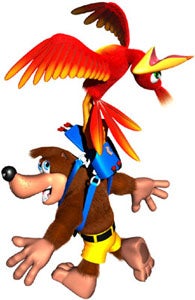 1: Scale the learning curve
Not that many games overwhelm the player with complex controls from the start, but it's still a fundamental of games that must be remembered. Banjo-Kazooie started you off with the most basic moves before letting you loose in the first world, and new moves were acquired in the first 6 worlds. Rather than dump all those moves on you from the start, the game eased you into those moves, usually with a puzzle in each world that required the use of that new move. Basic? Maybe, but it's something game developers would do well to remember.

2: Have a prominent villain
Who doesn't remember Gruntilda the witch? She's probably the most memorable character in the game, and that's because her presence is constantly felt. She shows up in the opening cutscene and then doesn't re-appear until the last two challenges at the end of the game, but she constantly mocks and insults you as you make your way through her lair. The fact that she only speaks in rhymes, is funny and comically disgusting, only serves to make each line she spouts more memorable. Borderlands 2 recently did this with the villain Handsome Jack, and it's just as effective. If you want a memorable villain, keep them at the forefront of the player's mind like this. Villains should be more than just things to punch at the end of the game. They should stick in the player's mind long after the game is turned off.

3: Throw the players curveballs
After completing all the levels in the game, one would expect to right away face off with the final boss. It makes sense. It's a formula that games have used over and over again. Banjo-Kazooie threw players for a loop, though, because before fighting Gruntilda, there was a quiz show hosted by the witch herself. The questions asked could range from general trivia about the game to identifying music and sounds to re-doing earlier puzzles with either a shorter time limit or some other challenging twist. Asking players to remember as much as they could about the game and recall how to beat specific puzzles was an unprecedented twist in the eleventh hour of the game. It's good to keep players on their toes, and while a trivia show might not be right for every game, it was a good way to shake up this platformer/adventure game. A complacent player is a bored player. Keep them surprised. 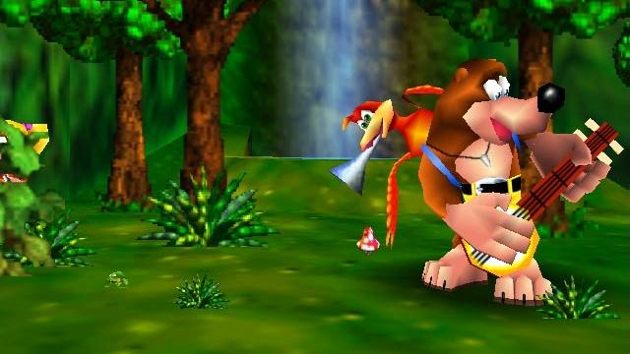 4: Dynamic soundtrack
Every great game needs a great soundtrack, and few deliver like Grant Kirkhope's unique soundtrack, full of marimba and horns and peppy step. Beyond being fun, the soundtrack was dynamic, smoothly transitioning themes from one area to the next. The main theme of the overworld was always the same, but when the player approached a world entrance, the theme was played with different instruments and tempo more fitting to the world's feel: chimes for the winter level, an organ for the haunted house level, and bouncy brass for the swamp level (with accompanying frog choirs). Click Clock Woods, a world that takes place during the four seasons, has different variations of the world theme for each season. This went a long way to adding to the atmosphere of the game. A changing and dynamic soundtrack makes the game feel more alive and keeps the player alert and interested. 5: Use system limitations to your advantage
Unlike most modern games, the characters in Banjo-Kazooie didn't have voiced dialogue. Instead the text on screen was presented with a string of garbled noises representing each character's voice. It was funny and gave the player an immediate sense of what the character should sound like. This was done because of limited space on the game didn't allow for proper voices. But you'd never be able to tell because the �voices� used blend seamlessly with the feel of the game. Silent Hill is another game that comes to mind, its use of fog both meant to obscure the scenery that hadn't yet been rendered while also heightening the player's fear of whatever was just ahead of them.

Given today's more powerful systems and larger memory space on games, this is less of a problem than it once was, but still a useful thing to keep in mind. When you're restricted or limited in your game design, don't despair: work with it. Limitations breed creativity.


There are doubtlessly other lessons that can be gleaned from this gem of a game, but I felt that these were the most important ones to emphasize.
Doubtless there will be more posts to follow, and I have plenty more to say about Banjo-Kazooie! Stick around, folks!
#General-Opinion/Editorial
Login to vote this up!