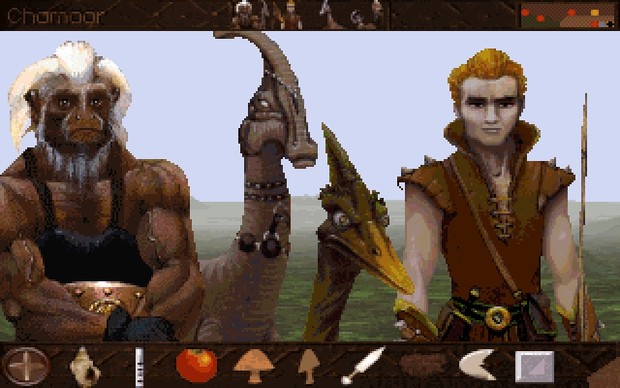 Lost Eden tells the story of Adam of Mo, a young human prince tasked with rebuilding the severed alliances between dinosaurs and man and uniting the world under a single banner in order to defy the evil Moorkus Rex, leader of a tyrannosaur army threatening to subjugate the entire world. Except... he didn�t really look like a t-rex? That part was a little weird.

The point is, the t-rexes were the bad guys, and the velociraptors were the good guys. As a youth devoted to the point of obsession with Jurassic Park, this was clearly right up my alley.

Lost Eden was not a particularly great adventure game. It didn�t have the unique humor of a LucasArts title, nor did it have the compelling arhitecture or attention to detail found in Myst. It didn't even really possess the charm of a King�s Quest. What it did have was dinosaurs. A generous helping of dinosaurs.

While the gameplay and puzzles were not particularly interesting or challenging, there were a couple of elements that worked well. Its narrative, while mostly predictable (it�s called Lost Eden, you play a guy named Adam... is anybody surprised when Eve shows up?), does have a couple of poignant moments: the reaction of your dinosaur companions to the discovery that their culture�s great prophecy for the future spells doom for their races has the appropriate gravitas, and a moment in which the hero poisons himself to journey to the land of the dead is pretty cool.

The game also had a really interesting new-agey score by Stephane Picq. Some of the tracks sound like B-sides from Pure Moods, but on the whole, they contribute greatly to the game�s excellent, brooding atmosphere. Also there is a track called �Velociraptor Ride,� which, come on. It was compelling enough that I actually tracked down the soundtrack on the internet five or six years after playing the game and had it shipped from France. Importantly, because CD-ROM games were a relatively new phenomenon, the music sounded unbelievably different than anything else I was used to hearing in games.

Here are a couple tracks, to show you what I�m talking about:

Would I recommend that other people track down Lost Eden and give it a go for themselves? Eh, probably not. We�re busy people, and it isn�t what I�d call a forgotten classic. It�s important to me, however, because it demonstrates just how varied our gaming histories are--none of us can claim to have played all of the classics, for one, but all of us--especially those of us who have been gaming since we were very small--have played many, many games. As children, when we were less discerning, we exposed ourselves to a higher-than-usual proportion of flawed-but-interesting pieces.

As someone who�s interested in the whole history of the medium, I�m fascinated by all of the forgotten games of our collective childhoods. How many games have you played that were, by all accounts, not great--but have stuck in your memory anyway, informing your tastes as a gamer and occupying a special place in your heart? I�d be willing to bet that each of us has quite a few.