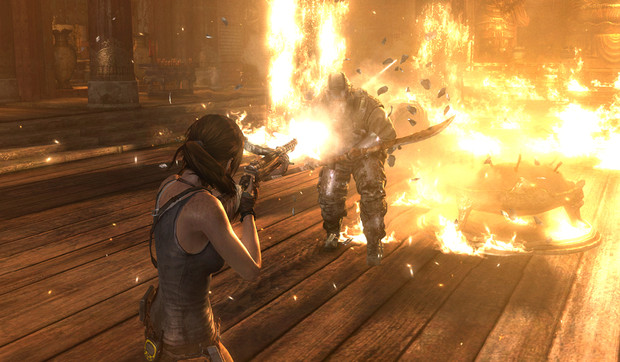 There�s a reason, however, that there have been some good arguments raised about whether or not Bioshock Infinite�s ultraviolence undermines its narrative (and, of course, its accessibility to non-gamers or casual gamers). When a game strives to remind us, throughout its story, both that our character cannot wash the blood off his hands and that we may or may not have any choice in the actions that we�re taking, we start to look a little more critically at the slaughter that we�re perpetrating. This isn�t Yamatai--we�re not forced to choose between helping Lara slaughter thousands of men or watching her die. This isn�t even Rapture, where we�re forced to put down scores of Splicers that want to harvest us for our ADAM.

In Columbia, we kill hundreds of men because... Booker�s a bad guy already, and that makes it okay? Because we�ve been brought here by fate (or the Luteces) and because we have no choice? Because if we let them kill us, we�ll wake up back in our apartment and step out the door and... keep on killing? That�s a sort of WarGames scenario, right there. The only way to win is not to play. In Tomb Raider or the original Bioshock, there�s a light at the end of the tunnel--kill all the bad men, and eventually the killing will stop, and you�ll be safe. In Bioshock Infinite, if you kill enough bad men, then... none of it will ever have happened? Well, that�s cool. I�ll tell you how else that could happen, though: don�t play the game in the first place.

Obviously this isn�t a course of action I suggest anybody take. The game is awesome. If you don�t play it, you�ll be missing out on all sorts of wonders. I only mean to highlight the ways in which the game�s ending makes you reflect on your experience throughout the narrative and ask yourself, �why?� This isn�t Mass Effect 3 or Red Dead Redemption, games which also involve inevitable final sacrifices but allow the player to internalize, come to terms with, and follow through with those sacrifices as though they were their own decisions. Nor is it Shadow of the Colossus, which telegraphs its protagonist�s fate within the first hour of the game and dares the player to continue anyway.

Bioshock Infinite, by keeping the player�s blinders on until the final sequence, never allows players to understand the full import of their situation until they�re waist deep in the river and the only thing left to do is drown.

It�s a bold, powerful choice. Is it a good one? I�m not sure I�ve figured that out yet. Maybe the fact that I�m still sorting through it in my head means it was a good decision. Not all art needs to be cathartic, and sometimes brilliant pieces are deliberately dissatisfying. Nevertheless, I�m not sure I�ll be returning to Columbia anytime soon. The game aims to frustrate, and it succeeds! I will go and play some other things, and perhaps when my frustration has subsided, I will return. I�ll let you know how long that takes.

This article originally appeared at The Lost Levels.
Login to vote this up!