Game Compilations that Disappointed Me

Game compilations can be awesome! I love the idea of buying one disc or one cartridge for the price of a new release and having instant access to multiple full games. I especially like when beating those games unlocks even more full on games. Over the years there have been a lot of really great game compilations but unfortunately, there’s no such thing as perfect and it seems like for every Kirby’s Dream  Collection, Hitman Trilogy or, Mega Man X Collection, there’s a release that simply doesn’t measure up. Nintendo directly mentioned that since the Switch isn’t going to utilize a Virtual Console, game compilations could be used as a substitute to play classic games so it’s with that baffling statement that I’ve come to think about this subject and indeed, the compilations that left me either wanting more or just plain old disappointed.

Seiken Densetsu Collection! This is a collection of Seiken Densetsu 1 through 3 or as you may know them in the west: Final Fantasy Adventure, Secret of Mana and, When are they going to localize this game?! Personally, I do enjoy this collection which is part of why it’s the first one I’m going to talk about. What I dislike about this collection is how tone deaf Square Enix seem to have been about releasing this. Seiken Densetsu 3 may not be Mother 3 in terms of demand and popularity but it’s been on the Japanese market since about June of 2017. That’s nearly a year at time of writing and in that time, there’s nothing stopping Square from translating the third game in the series and launching the whole collection world wide on the Switch eShop. I understand that their resources are likely being worn thin due to Kingdom Hearts 3 crunch, Final Fantasy XV padding and innumerable other sub-projects that are likely to fall to the wayside within the next few years but it just seems like an easy payday from fans of the Mana series. (This could have been much better)

Final Fantasy 25th Anniversary Ultimate Box. It really rolls off of the tongue, right? Back in 2012, Square Enix did a Year of Luigi style celebration of Final Fantasy by launching a number of special products and this infamous collection which you very well might have forgotten about. The 25th Anniversary Ultimate Box sounds absolutely amazing: it has every numbered Final Fantasy released up to that point and their soundtracks on CD but I’m having trouble finding which platform it was launched for. It was likely that they were launched for the Xbox 360, PS3 and PC but I can’t confirm that and by now you might have guessed my problem with this compilation: It was released in an extremely limited quantity and we haven’t really seen any new Final Fantasy compilations since then. A quick glance over at eBay has shown that the Ultimate Box is being sold but it doesn’t seem to be available for anything less than a thoasand dollars and again, I can’t tell which platform these collections apply to! The original Playstation has 2 Final Fantasy compilations which not only made Final Fantasy 1 through 6 (not counting the original number 3) playale on then-current hardware but those games were given graphical updates and minor gameplay tweaks. The Game Boy Advance also had enhanced ports of most of the early Final Fantasy games but the only ones that were collected on one cartridge were the first two. Final Fantasy is a series that people are always willing to pay for so it just seems baffling to me that there hasn’t been any new compilations when there so easily could be. Now try to act surprised when, during E3 of 2018, the Final Fantasy XIII-Trilogy is announced for the PS4 and Xbox One.

Super Mario All-Stars Limited Edition for Wii is downright insulting. This collection launched for the Wii around the Holiday season of 2010 and while it was priced at around $60 at the time, it’s easy to find this collection now for significantly cheaper. This is because the All-Star Collection on Wii is the same as the All-Star Collection on the Super Nintendo, that is to say, it’s the first All Star Collection for the Super Nintendo. If you’re a bitter 90’s kid like I am, you may recall that there were two Super Mario All-Star collections released for the SNES, one with and one without Super Mario World and it should be clear which of the two is objectively the better package. The Wii re-release of All Star is the first release so while it has the remade versions of Super Mario Bros 1 through 3 with Lost Levels, Super Mario World is conspicuous by its absence. The way the All Star for Wii collection was pushed and marketed at the time makes it even more shocking how anemic the overall package turned out to be: one would have assumed this was the big Wii game for Holiday Season 2010 and yet everything on the disc was (or would be) available on the Virtual Console. New Super Mario Bros Wii was a year old when this launched so it would likely be unreasonable to have expected that game or the DS version of New Super Mario Bros to have made an appearance on that collection but there could have been a lot of other games slapped onto the disc to make it a more enticing purchase. There was an entire series of 2D Mario platformers on the original Game Boy that could have been added to All Stars Wii. The later Kirby Dream Collection did this and it’s currently being sold for a much higher price on various online retailers. Super Mario All Stars for Wii isn’t a bad collection it just so happens to epitomize Nintendo’s laziness and complacency during a time when they were riding high on a wave of good will and great Wii sales and hopefully we won’t see another one like this in the future. 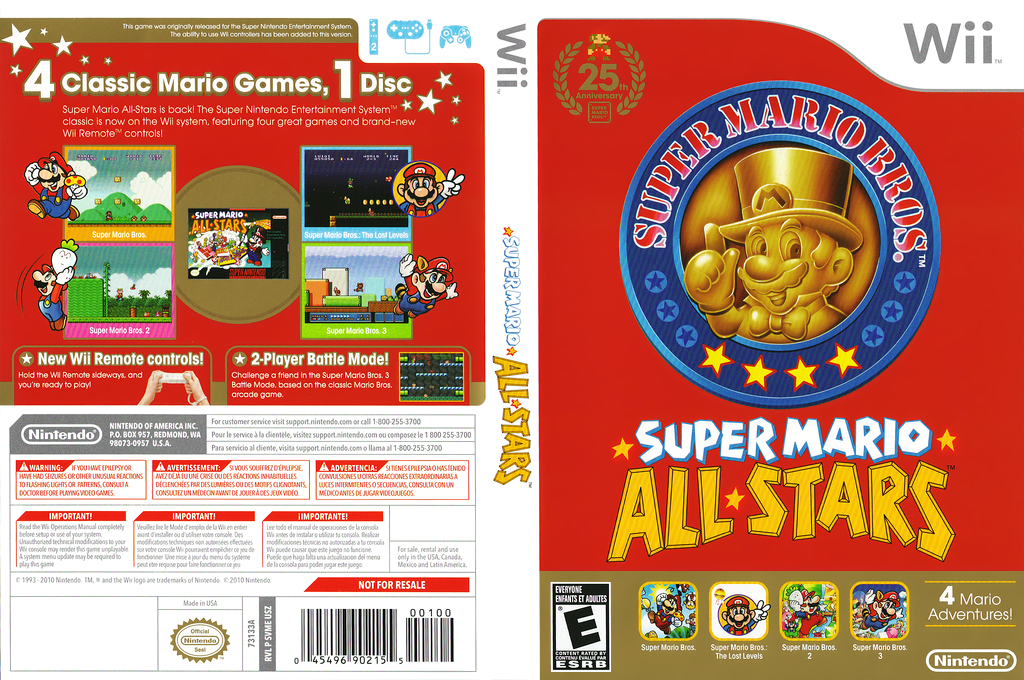 (The Limited Edition came with a Soundtrack CD that was...OK)

The Metroid Prime Trilogy is a compilation that was not at all for me. This package collects all three Metroid Prime titles and ‘enhances’ the first two in that they’re now compatible with the Wiimote and Nunchuck combo and all of the motion control that comes with that awful control scheme. If I’m being too subtle, I hated the Wiimote and Nunchuck control scheme, mainly because I had a lot of trouble making it work properly. I accepted that I would be unlikely to play the Metroid Prime Trilogy or Metroid Prime 3 until it gets re-worked to utilize the more standardized control schemes that gamepads offer. When the Wii U version of this collection was announced, I was pretty excited at by the opportunity to finally play through uprezed versions of these games with the gamepad. Unfortunately, Nintendo didn’t properly communicate that the Metroid Prime Trilogy for Wii U was just a digital re-release of the Wii collection. I can understand why Metroid Prime 3 wasn’t re-worked to utilize the gamepad or classic controller but the first two Prime games were originally Gamecube games. It would have made sense to either keep or reintegrate gamepad or classic controls into those games at least. I can almost understand why these controls were worked into the Wii release of these games (it would have required some programming work) but it would have made the game more accessible for plebs like me who are completely incapable of utilizing the Wii’s motion controls. I wouldn’t be surprised if Nintendo re-releases this collection on the Switch eventually and that will be the one to buy since they’re basically going to be forced to utilize standard controller-based controls for all three games. 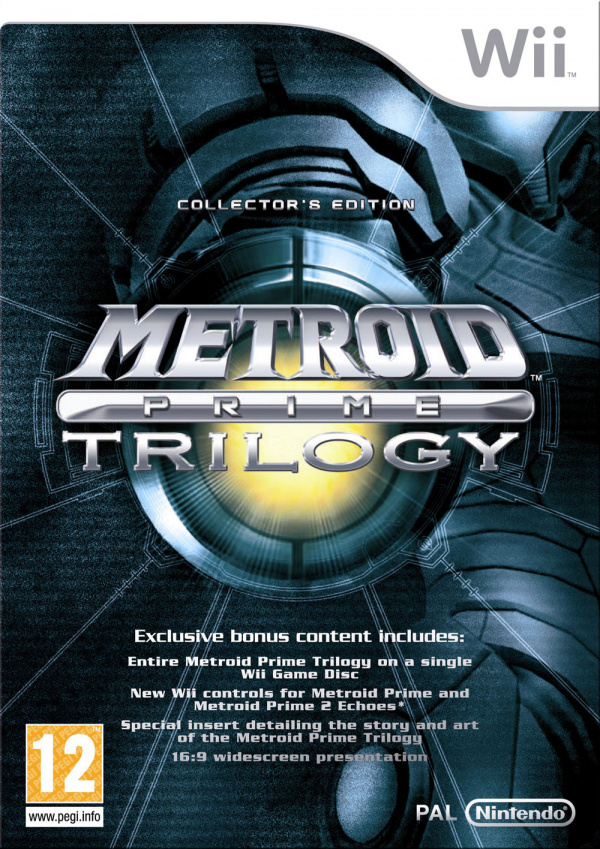 (These games are objectively better without motion controls. Fight me.)

There are a few more collections that I’d like to complain about but I don’t have any hands on experience with some of them. The Silent Hill HD collection features complete remakes of Silent Hill 2 and 3 because Konami lost the source code for those games. Silent Hill 2 was allegedly ruined because of this since a lot of the fog was removed, thus ruining the atmosphere of the game. I would also complain that this collection doesn’t include the first or fourth Silent Hill but considering how Silent Hill 2 turned out, that’s probably for the better. I want to complain about the Sonic Classics and Gem collections because they didn’t contain the classic, well-known Sonic platformers from the Genesis but I’m glad to see that they exist because those old Game Gear and Master System games would have likely been lost to time if those collections didn’t exist. I would like to complain about SNK collections in general since it seems like they’re all packed with nearly identical fighting games and iterative Metal Slug sequels with maybe one or two outliers but those collections are all fine and functional. The Disney Afternoon Collection is made up of Nintendo games but isn’t on the Switch or 3DS and the Sega Genesis Classics Collection isn’t on the Switch or 3DS either for who knows what reason!

(Where's my Nintendo version of this Nintendo Game Collection?!)

Maybe it’s because I’ve been spoiled by picking up great game compilations or maybe it’s because there really aren’t that many truly bad collections but it definitely seems like there are more good games compilations than bad ones. So far it seems like the 8th generation of console gaming was largely made up of remakes and remasters and if that trend continues then I’m sure we’ll see more of collections sooner rather than later. I’m ready for more compilations and I’m hoping that what we get have more work put into them than the few that I complained about above. It’s better that buying old games one-by-one anyway.