Gather ye gamepads while ye may. 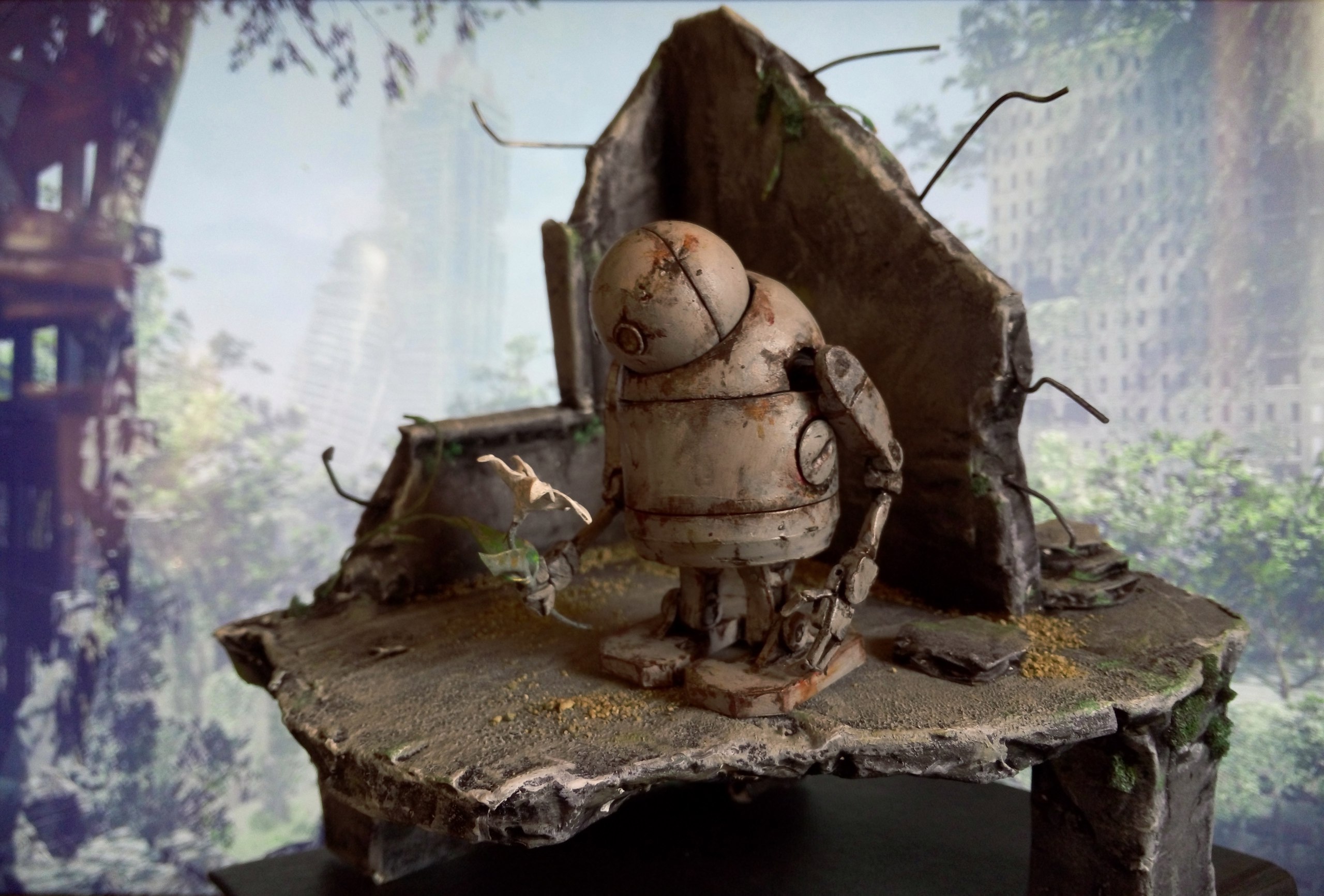 I’ve been in a bit of a new game rut lately—I want to play something new, but I want to find just the right game to play.  This is a concern we’ve all had: starting up that fresh new experience, instantly meshing with it, and gaming away for hours (and days).  Lately, I was watching coverage of Disgaea 6, anticipating my return to the series that would be both familiar and new.  Disgaea would be a game that I could play in quick bursts or long sessions, and it would feasibly last me months or more.  However, our comment section convinced me otherwise, and I was a bit deflated.

The hole left by wanting something new to play runs in stark contrast to reality: I have tons of games to play.  I have tons of games waiting for me to start them.  I was talking to my friend—you all know/love him as Frosty—and musing on whether now would be a good time to start my much-anticipated playthrough of NieR: Replicant.

But I don't want to.

And just why is that?  I loved NieR: Automata so much I went for the platinum trophy, and I only do that for games I truly enjoy.  I knew Replicant would be a 70-ish hour game if I play it at my own pace, and it’s not like I don’t know the plot or anything.  So why not jump in?

The short, stupid answer is that I’m a different person in a different situation than I was in 2017, or 2015, or any time before that.  I’m back in school, I have weirdly technical responsibilities vis-à-vis my classes, my director, my research, and my time.  I so badly want the experiences that I’ve always had with games, and I know they’re out there—in some cases, literally in my hands—but I’m constantly faced with this dilemma of spending my time wisely, or perhaps deliberately, as Emerson might say.  My fear is not that gaming is a waste of time—I won’t even entertain that bullshit stance—but that the limited time I have to spend on games won’t be spent well.

Here’s my current shelf, and the image that, mid-conversation, spawned this idea: 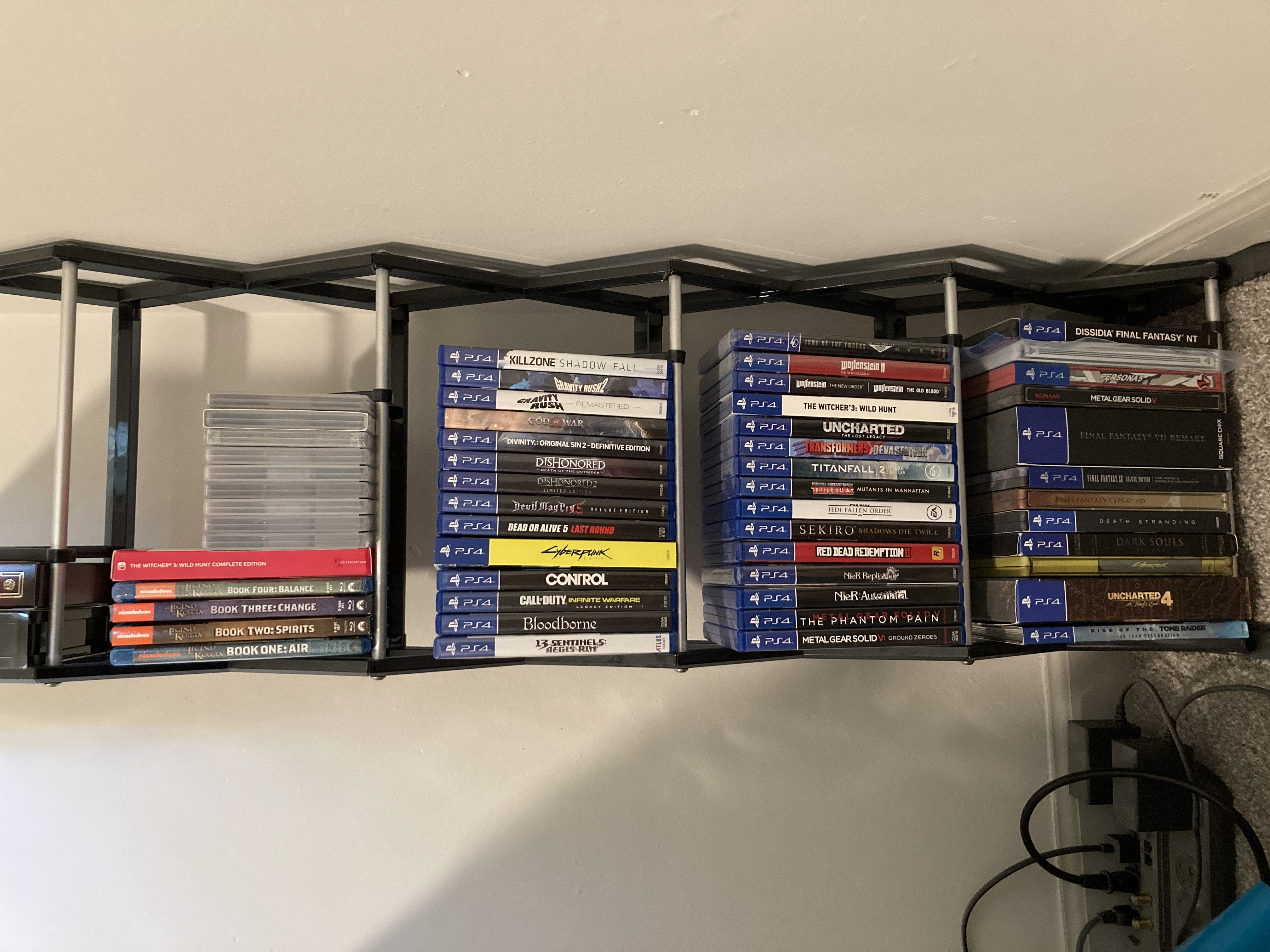 (Apologies for the sloppy photo.)

There are approximately fifty games on this shelf, including collections like the Dark Souls Trilogy.
Out of those fifty-some-odd games, I have not finished at least twenty of them.
Out of those twenty games, there are five games still in their shrink-wrap.
(And this is to say nothing of my downloaded games, many of which are also not finished.)

In some cases, like with Jedi Fallen Order, I’ve started the game and thought, “This is cool, but I’m over it,” and then just set it down and had no interest in returning to it.  In others, like with Dishonored: Death of the Outsider, I’ve been thoroughly invested in the world and gameplay, and simply didn’t return to it despite intending to.  And in the case of NieR: Replicant, 13 Sentinels, and a few other games, I’ve been so hesitant to start them because I don’t want that feeling of letting them fall by the wayside, in parallel to the Toy Story characters who keep waiting for someone to play with them again.

I don’t know when I will have the actual time to devote to massive investments like this, and I wish I had some solution for dealing with the hesitancy of simply sitting down and playing.  I have this weekend off, but if I start a game and don’t finish it, when will I?  Gaming is such a part of my regular activities that I don’t need to “make time” for it so much as I need to get into the mood to play a particular game instead of falling back on my usual mainstays, like Dark Souls or Hades.  And it’s not that bigger games are impossible, either.  I finished Sekiro last year, but that felt like a rare case where I was invested so heavily in a game that I could focus on it in light of my responsibilities.

I hate to play the age card, but this really does feel like a case of temporal distress.  It’s less, “I’m too busy to play games anymore,” and more, “I worry that the finite time I have remaining won’t be well-spent unless I’m playing exactly the games I want in the moments that I want them.”  How foolish of me to think this way, yet how foolish of me to think that I can just play “everything” as I did in my twenties.

I’ll briefly segue from this topic to a related one: I’ve had a blog idea kicking around in my head where I muse on the month of June during the year 2008.  On June 4th, Ninja Gaiden II released for the 360, and on the 12th, Metal Gear Solid 4 came out.  Those are two of my favorite games of all time (fight me).  I knew it then, in the moments that I played them over and over, absorbing everything about them, and I’ve known it for the past thirteen years when I reflect on them.  I’ve played so many great games in my life, but in the span of a single month, I played what I instantly understood to be two of my all-time favorites.

I bring this up here because there’s a part of me that genuinely believes there are more experiences like this out there, waiting to be found.  Witcher 3 was one, and Bloodstained very closely challenged Symphony of the Night for favorite Metroidvania.  Cyberpunk 2077, of course, wasn’t what we wanted, and while I loved Sekiro, it only reminded me that we haven’t gotten another Ninja Gaiden (or Tenchu) in years.  I’ve built up this myth of the “perfect game” in my head with such ardor that the disappointment of not playing it is greater than the joy I might derive from just trying new titles.

As I finish this, I have my PS4 turned on in front of me.  I usually put on YouTube while I panel-line Gundams (I haven’t started that Qan[T] yet, Torch), but I’m looking at my friends list where one of my buddies is playing Mass Effect Legendary Edition.  He has played each of those games, including Andromeda, multiple times each.  I don’t blame him for playing through the entire trilogy again just to recapture that sense of joy and immersion that he had a decade ago.  (And it’s perfectly fitting that the PS4 dashboard’s description of his activity in the game simply reads, “Playing the game”.)

And as I look at my shelf, I think that some of these games could go to better homes, where people will play and enjoy them as they should.  I’d probably trade almost everything here for a single copy of Chrono Trigger or something.  But I could also just put NieR: Replicant into the drive and stop pretending I have time to wait for games to be perfect anymore.

Every once in a while I've got some proper shit to say about videogames.