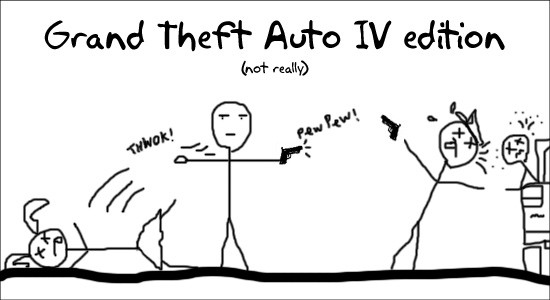 For those who don't know, Kingdom of Loathing (KoL) is a text-based MMORPG. It's extremely low-tech, and 100% tongue-in-cheek, and if you don't like it, then you are a terrible human being. Technically, the game has been in open beta since its inception in 2003, and the game recieves multiple updates every week -- some big, some small. So, once a month, I'm going to write up one of these recaps profiling the latest additions. Capiche?

What's that? This isn't relevant to you? Well, then start playing the game. Then it will be.

May's Item of The Month
This month's Mr. Store item is a Packet of Mayfly Bait. When used, it becomes the Mayfly Bait Necklace accessory. The necklace gives you the (limited uses-per-day) Summon Mayfly Swarm ability. Using this skill seems to produce a random result, none of which seem particularly exciting, but we're only just learning what it's capable of, at this point. Watch the wiki for more info, as it's discovered. Like usual, it'll cost you one Mr. Accessory to buy or, in big-people talk, a $10 donation. Not sure if this one's worth it, though.

April Fool's Day Shenanigans
This year, the Kingdom of Loathing was turned into the Kingdom of Salad. What? Oh well, I suppose expecting the Kingdom to make sense is pretty unreasonable. Almost all images within the game were replaced by images of a bowl of salad, and adventure text had select words replaced with either the word "salad" or salad ingredients. More notably, the Spectral Salad Factory appeared in the Plains. It offered only one adventure, which always rewarded you with a delicious salad. Eating this salad gives you a one-in-four chance of acquiring a salad tattoo.

Pastamancing The Stone
Pastamancer updates! Huzzah! The damage caps have been raised on the Pastamancer's offensive spells. Jick hints at possible future tweaks, as well. Also, if you have something influencing the elemental damage of your spells, Weapon of the Pastalord now does half-physical, half-elemental damage, with new text. Jick is also in the process of preparing some new item drops which will unlock a new combat mechanic for Pastamancers. I await with pasta-y breath.

Having Your Wand Blown Is Not So Bad, Now
If you overuse your Wand of Polymorph and cause it to explode, you will now be able to acquire a new one three days later, instead of having to wait until your next ascension. This update then made mention of watching out for zombies 25 days after acquiring the new wand. Is this just a gratuitous 28 Days Later reference, or is another zombie invasion approaching?

Disco Napferno
The Disco Nap skill now allows you to rest at your campsite once per day without using up an adventure. Also, the Power Nap will now net you two free rests per day. Sexy Disco Bandits apparently need a lot of sleep.

A Trophy No Longer Trapped In The Closet
Trophy number 64 has been discovered. Apparently, if you place 13 Spooky Pirate Skeletons in your Closet, you will be elegible for the Dirty Laundry trophy. How the hell do people figure these things out?

You'll Tide Too
Our second Yuletide occurred on April 30th. Five new stories were added to the Bonfire, bringing the total up to ten. This includes the chiller "The Tale of the Mysterious Albino Ladies and Stuff". Roasted Marshmallows were had by all.

Bad Moon Cheesin'
Bad Moon players will no longer have to lose their sanity trying to score some Anticheese for their Goats. The Desert now has an adventure for Bad Moonies that satisfy all their Anticheese needs.

- If you're a lucky bugger who has a Crimbo P.R.E.S.S.I.E. and/or its familiar equipment, now you can has Metallic Cat Ears. Guess what it does. Lulz.

- Locked doors in the Dungeon will now tell you how many skeleton keys you have.

- When you view a clan, "(BM)" now appears next to members currently in a Bad Moon run.

- Divine Champagne Flutes are now usable items, allowing you to choose which booze you want to drink with the flute. They've also been moved to the Consumables > Miscellaneous section of your inventory.

The KoL Coldfront fansite posted an interview with the game's bossman, Jick. So, read it and stuff. NS15 in "at least a year or two"? Do tell.

Also, it was revealed that Jick will be rolling out new content that should help power-levelers out. When? Er, he should've done it by now, but let's assume it's just "soon." As someone who really wants those level 30 trophies, but is too lazy and impatient to slog through the difficult process of leveling up that high, this is great news.

--
These are not necessarily extensive lists. I've just picked the most relevant-to-players updates. As usual, you can find all trivial updates here. If you haven't tried KoL, please do so, because it's the only chance you'll ever have for happiness. My character's name is Hugh Beaumont, so feel free to stop by for a free beer and some giggle. Also, lucashoal runs a Destructoid clan. Visit the wiki for more information than you'll ever need.
#Community
Login to vote this up!