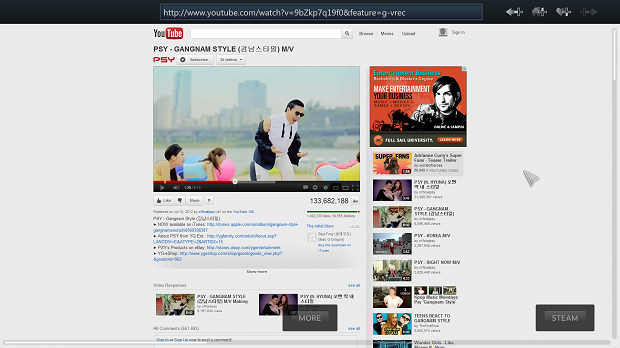 Big Picture Mode isn't perfect. The web browser packaged with BPM currently doesn't seem to have much flash support, which could kill off its use for some people. Having Steam's BPM interface pop up with the Xbox dashboard button can be problematic if you have any games that also use Games for Windows Live, such as Dirt 2 or Fallout 3. I've had some issues launching a few games via BPM (for example, Max Payne & Max Payne 2) and the titles wouldn't launch what so ever. I should also mention that games which require a launcher, such as Skyrim, also still require a mouse in order to click the �Play� button to launch the game since the controller-mapping doesn't carry over into the launcher. The issues with BPM vary from minor to somewhat bothersome but it's technically still in beta and it's only been out for a day, so I wouldn't be surprised to see Valve push out fixes for a lot of the early issues found in BPM.

I've been pretty much a console gamer most of my gaming life. However, I've been trying to jump back into the world of PC gaming for a decent amount of time now because of Steam and to escape a lot of the crap that has been plaguing consoles. Assuming Valve keeps up with polishing Big Picture Mode (which is up in the air, considering how Valve-time works), this new Steam feature could be an excellent gateway for console gamers who want to make the jump to PC gaming without sacrificing the more pleasant living room experience. Initially these are a few of the things I'd immediately suggest for improving Big Picture Mode:

-Better support for games with their own launchers.
-An ability to boot Steam straight into Big Picture Mode
-Integrate a built-in button-mapping program (a la Xpadder)
-Multiple text-entry options

If you're happy with your more traditional PC gaming setup, or are one of the types who sit only a few inches from your monitor or stick with keyboard and mouse all of the time, BPM will probably not be for you. It's a little rough around the edges, obviously, but I'd definitely recommend Big Picture Mode if you're one of those people who want some of the best of both worlds from PC and console gaming. At the moment I have Xpadder's autoprofiler rigged to jump through various hoops to let me use my PC from the comfort of my couch, however I'm already in the process of ditching that in favor of Big Picture Mode.
#ShareonCommunityBlogs
Login to vote this up!