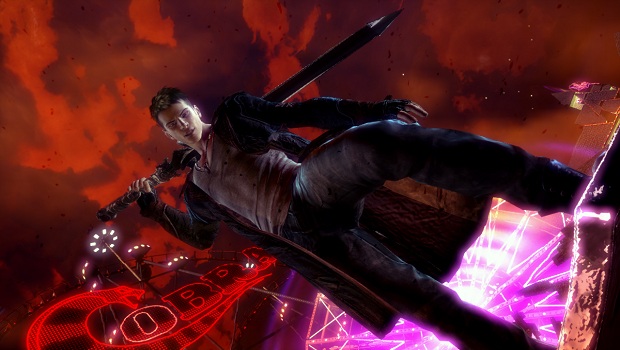 On my first play through of the demo I did think the game felt a tad easy for a Devil May Cry game. It wasn�t offensively easy or anything that would cause me to be alarmed, but the demo did feel a tad lax to me. My second play through of the demo, however, did make me feel a tad concerned about the difficulty of the game. I pretty much ran through the first level of the demo on Son of Sparda difficulty and the only times I ever took damage were when I was fighting against the games controls itself. And even when I did fumble with some of the game mechanics it would take a small bit of time before I was actually in any sort of danger since the enemies you face are pretty passive and telegraph their attacks a solid second or two before they actually attack.

There is a second level to the demo as well and it consists of fighting some weird larvae woman who curses every three words and looks kind of like one of the brain bugs from Starship Troopers. It wasn't a bad battle at all but it wasn't anything remarkable, it was effectively a �beat the shit out of it until it dies� boss and while there was a very basic pattern to the boss it didn't feel on the same tier as some of the bosses from DMCs past. Perhaps I was a bit jaded by this point because I was already fairly turned off by the demo.

Oh and while I complained about the dialogue being bland and the voice acting being wooden earlier in this blog, I feel like I should make a point to talk about the dialogue that pops up for the boss battle segment of the demo because it's particularly awful. I'm not going to go quote for quote on this, but the exchange between Dante and Brain Bug Lady is effectively a bunch of Jerry Springer curse word salvos tossed back and forth and there isn't a single glimmer of witty well written dialogue. Even with the intentionally cheesy dialogue from previous DMC games in my mind, the dialogue in the DmC demo is pathetically juvenile and tries so hard to be edgy and cool that it comes off as a desperate plea of �look at us and how edgy we are�.

In summary (since I know must of you probably scrolled down by now, losers)

DmC is a game that I really do want to like. Sure there were a few other facepalm moments here and there, Voldo-styled bondage Sparda was extremely laugh out loud worthy in its awfulness, but I honestly like a lot of the ideas that are going into the game. I just think the decision making and execution of those ideas are a bit off. Based off the demo (which obviously leaves a bit of wiggle room since its not a full game) DmC feels decent to good, but not what I would call great.

And as a little extra...

Trev sent me this video whilst we were discussing DmC. It's about the new version of Dante and the flaws he has as a character and in terms of the character he's effectively replacing. Whether or not you agree is up to you, I thought I'd just mention it because it does a pretty decent job of putting together a respectable list of issues with the new take on the character, and it should shut up some of the people who still think people don't like him just because his hair is black.