Review: Arrest of a stone Buddha

It was late, but I sat there, Switch in hand, as the opening moments of Arrest of a stone Buddha played out drearily, bleakly before me. Cold-blooded execution in a church, and there I was taking control of the executioner, soon mowing down veritable hundreds of cannon fodder thugs. At least, I tried. I died. I died again. I wasn't sure why I was dying. "This is the tutorial?" I wondered to myself. "Oh boy," I thought, "am I not going to like this?" It was the fear of starting something new from an artist you respect and questioning whether your enjoyment of their work was a one-off; a movie by a director you've enjoyed, or a new book from a favorite author. It was fear that struck me initially,

One-man creative force Yeo's previous game, The friends of Ringo Ishikawa, serves as an indication as to what we'll get with Buddha. Like Ringo, Buddha plays as a genre deconstruction: Set in a perpetually-gray Paris of the mid-'70s, you control a nameless hitman navigating the city's traps and trials. You'll be given little instruction in what to do or how to do it, and besides the fact that you do indeed end up gunning down hundreds of France's most-wanted, the entire affair is capital-S Subtle. Not for everyone, but an interesting and wholly original undertaking for those willing to give it the time.

Buddha's bloodletting gameplay is a 2D shoot-em-up affair (more on that later), but in between hits our John Doe "hero" has to fill the time somehow. Slowly... slowly crawling left or right, you can mosey around your Parisian neighborhood as the clock ticks away the hours until your next job. Stop into the local cafe for a round (or three), or go buy an overcoat fit for Alain Delon. Visit the pharmacy, and maybe buy something? If you can figure out how to do that.

Stone Buddha positively revels in ambiguity, not only in its medias-res storytelling, but its basic gameplay. Outside of our opening combat prompts there's little in the way of hand-holding, making your trudging around Paris doing, well, nothing, feel a little meaningless. Which, I take it, is the point. 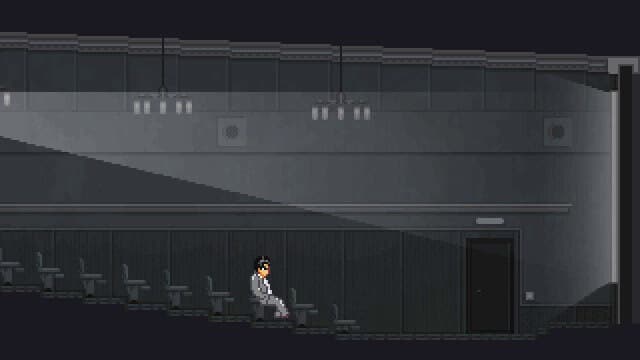 Previously with Ringo Ishikawa, Yeo worked to juxtapose the street brawling chronicle of his title character with the sort of vague mundanity that must accompany every Japanese delinquent's school days. Though whereas that game charms with its small town Persona-lite passtimes, Buddha's downtime feels like just that: Downtime. The interludes aren't particularly enjoyable stretches of gameplay, despite being able to take in the highly-evocative spritework and somber score. The time between the bloodbaths often feels like we're just waiting, bumming around with our hands in our pockets (this is a game where the player can choose to fold their arms, or saunter around with sunglasses--both arbitrary).

Stone Buddha is about style, and the ways in which minimalism and reduction can make the most mundane action or detail appear exciting.

During these inter-murder stretches, your time is what you make of it. The player could put the controlelr down and sip a cup of bitter, dire coffee dramatically while they wait to move on to the next story segment. Or one could take in the somber palette of autumnal Europe (Yeo's spritework has come a long way from Ringo Ishikawa, and is quite impressive), flicking cigarettes to the ground endlessly while the ambiant score washes over you. A post-op exchange with the hitman's contact reflects on this literally: "How do you cope with all this," he asks. "Work," the handler replies. "How about when there's no work?" Buddha takes "all work and no play" through the oppressive wringer, asking what the point is when neither work nor play is of interest. 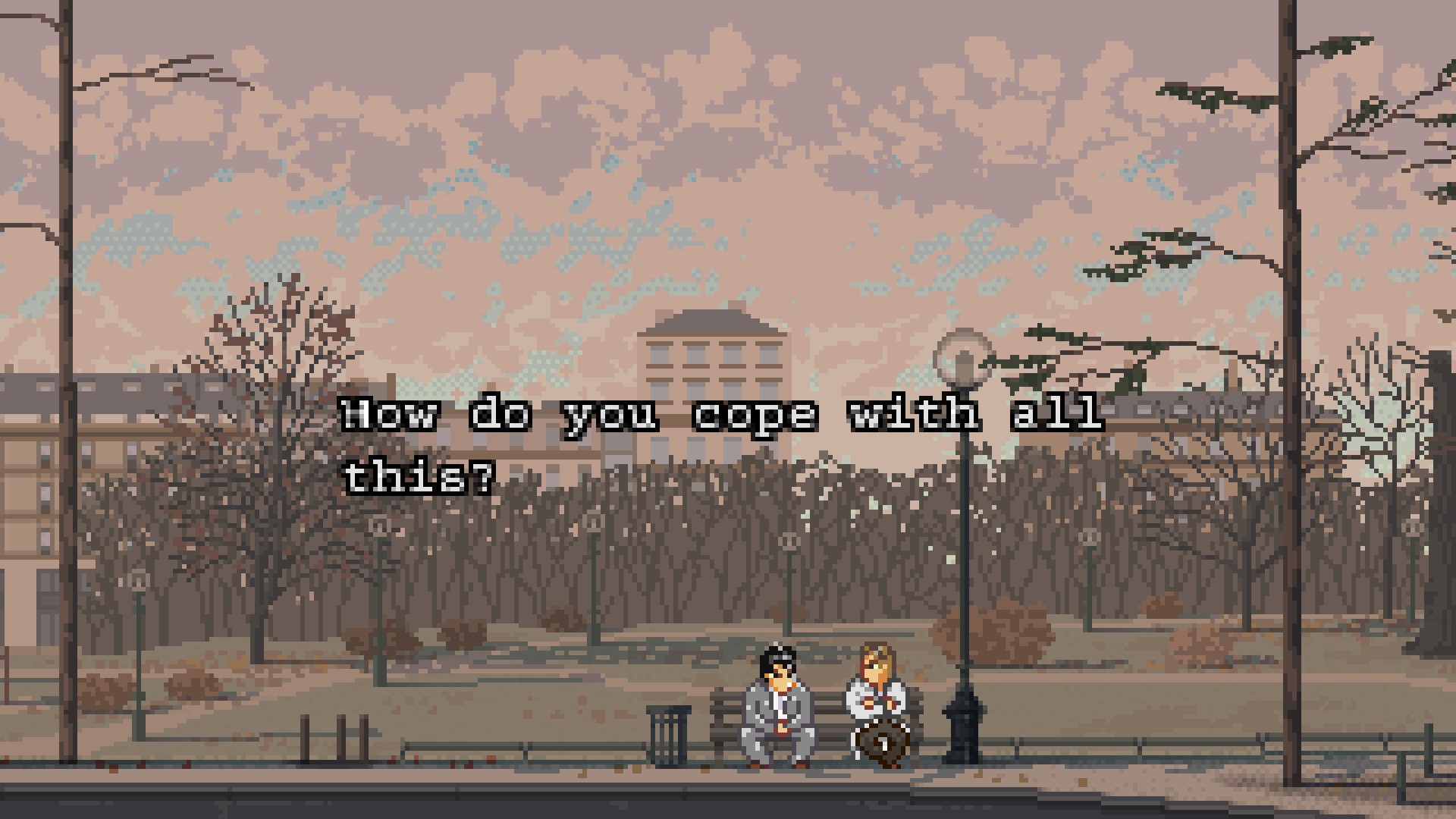 The "work," then. Unfolding on a 2D plane, the player can shoot in either direction or disarm a nearby thug, asked to relieve the goons of their guns as a means of reloading. As enemies rush you, Arrest feels almost like a rhythm game, or a puzzle; a sadistic amalgamation of Tetris and Dance Dance Revolution, but directed by John Woo, though perhaps lacking the precision of any of those connotations. Without a lick of visual indication of taking damage, you're sort of left on the edge of your seat with how a given level is progressing. "Am I absorbing those rifle shots, or are they all just like French Stormtroopers, missing all the time?" Stone Buddha compounds some of its shoot-em-up frustration with enemies that will linger in a firing position far off-screen, leaving you potentially with clean-up duty that requires you to trudge (I say "trudge" literally; our killer walks at a snail's pace, all the time) all the way back while more infinite hordes spawn so you can complete a level. Not to mention the introduction of stairs or other inclines creates an unclear and awkward "line of sight" that defies physics.

While I was initially disheartened by my frequent and unclear deaths, I admittedly dropped the difficulty to "easy"--which still took some adjustment--and I started to get the combat. Buddha has strategy to it, forcing you to allow thugs to come close so you can disarm them. Prioritize the side from which a would-be assassin is already taking aim, while managing the enemies approaching from your other side. It's simple, but I was eventually entering a sort of zen state of minor management as I dispatched enemies with a prowess that would make Chow Yun-Fat blush. 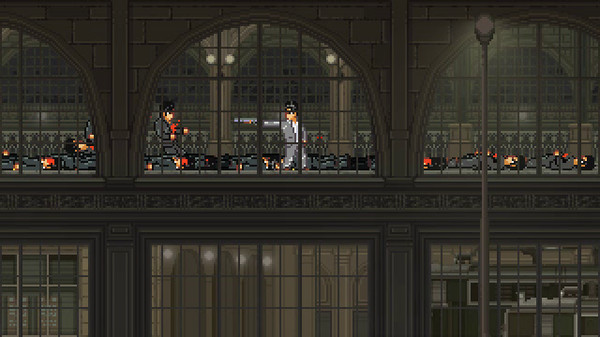 And ultimately, "zen" might be the word. If Animal Crossing is the sort of game one plays to zone out frivolously, Arrest of a stone Buddha is a game where the player sinks into a mire of nihilism and meaningless, made effective by Yeo's use of repetition. In fact it's the compounding of monotony in the hitman's routine, with levels beginning with the player aiming and then firing at their target, that makes parts of Buddha's presention so stylish and effective.

For example, we're prompted to fire from within a parked car, resulting in a cinematic spray of blood on the windshield, is the sort of unexpected, pulpy satisfaction that makes Yeo's games so incredibly intriguing. Stone Buddha is a game about reduction, stripping the experience down to its bare bones. Any flourishes that subvert the mechanics presented are all the more noticeable due to how few actions the player performs in the first place.

I feel obligated to make clear that Buddha might push its parsed-down aesthetic too far. The interludes between shootouts are indeed meandering, with little actual content to experience. The story beats are so minimal as to be almost without consideration. Arrest of a stone Buddha isn't about a labrynthine criminal plot, or even about exploring a killer's conscious. We simply perform the role of hired gun in a meaningless existence, and follow that thread until Yeo says "Alright, that's enough." However, as a game whose goal can be seen as getting the player to the point where Buddha's ending is impactful and shocking, I can't help but feel that any "boring" bits are made worthwhile. 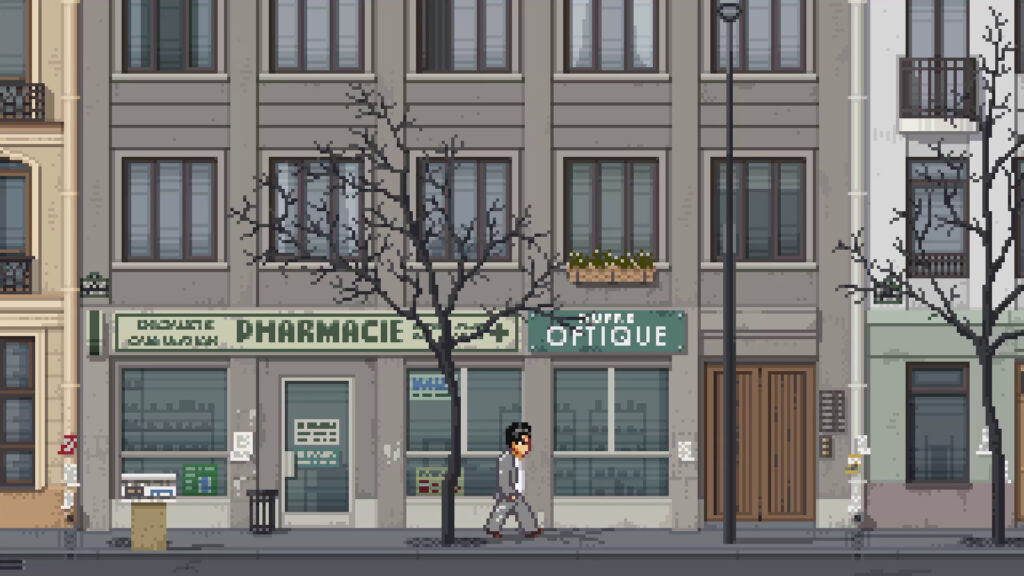 Arrest of a stone Buddha is a truly unique experience. Yeo's continued drive to push players towards "anti-fun" will alienate many, as this is a game that demands extreme patience for an exercise in minimalism; mileage on the pay-off will vary greatly from player-to-player. Yet for those who can accept an experience that is something of a dream, a slow walk through an unclear, downbeat pulp atmosphere, Arrest of a stone Buddha delivers an idiosyncratic stomp through a criminal underbelly, tinged with cinematic references and a reverence for classic gaming aesthetics. And any game that allows me to flick sunglasses on or off at a whim can't be all bad.