Truly, it was with a boyish sense of eagerness that I embarked upon Doom 3; hope for the often-maligned “reboot” of the iconic Hell-stomping, trailblazing franchise. I was ready for the naysayers, those invested in the fast-paced trigger-happiness of Doom and its sequel, Doom II: Hell on Earth (Okay, here’s an aside of frustration that I will try to limit to this space exclusively: “Doom?” “DOOM?” “DOOM II,” followed by “DOOM 3?” “Doom 3?” I’ve seen the games written, officially, in so many stylizations such that I just don’t freakin’ know anymore, and since I don’t know, no one knows, because I’m always right. [Send help.]) to be wrong, simply unprepared for the languid pace of the demon-slaughtering gunplay and the atmosphere-spewing lighting of Doom 3’s horror-shooter aspirations. Change is scary, people fear change, people react to what they fear with hatred and anger, etc etc. But no. Doom 3 does kinda suck. But that’s okay.

My 16-year late arrival to the Doom 3 party, having played itself out finally over the past few weeks, was prompted by a few things. Firstly, I bought Doom 1-3 on Switch a month or so ago for mere lunch money. Sam don’t like a backlog, so it was time to clean up some. Secondly, I just read The Masters of Doom by David Kushner, the nonfictional account of Johns Carmack and Romero meeting, forming id Software, and making Doom (and Commander Keen, and Quake, and Daikatana, and all that). Good read. Time to get psyched. 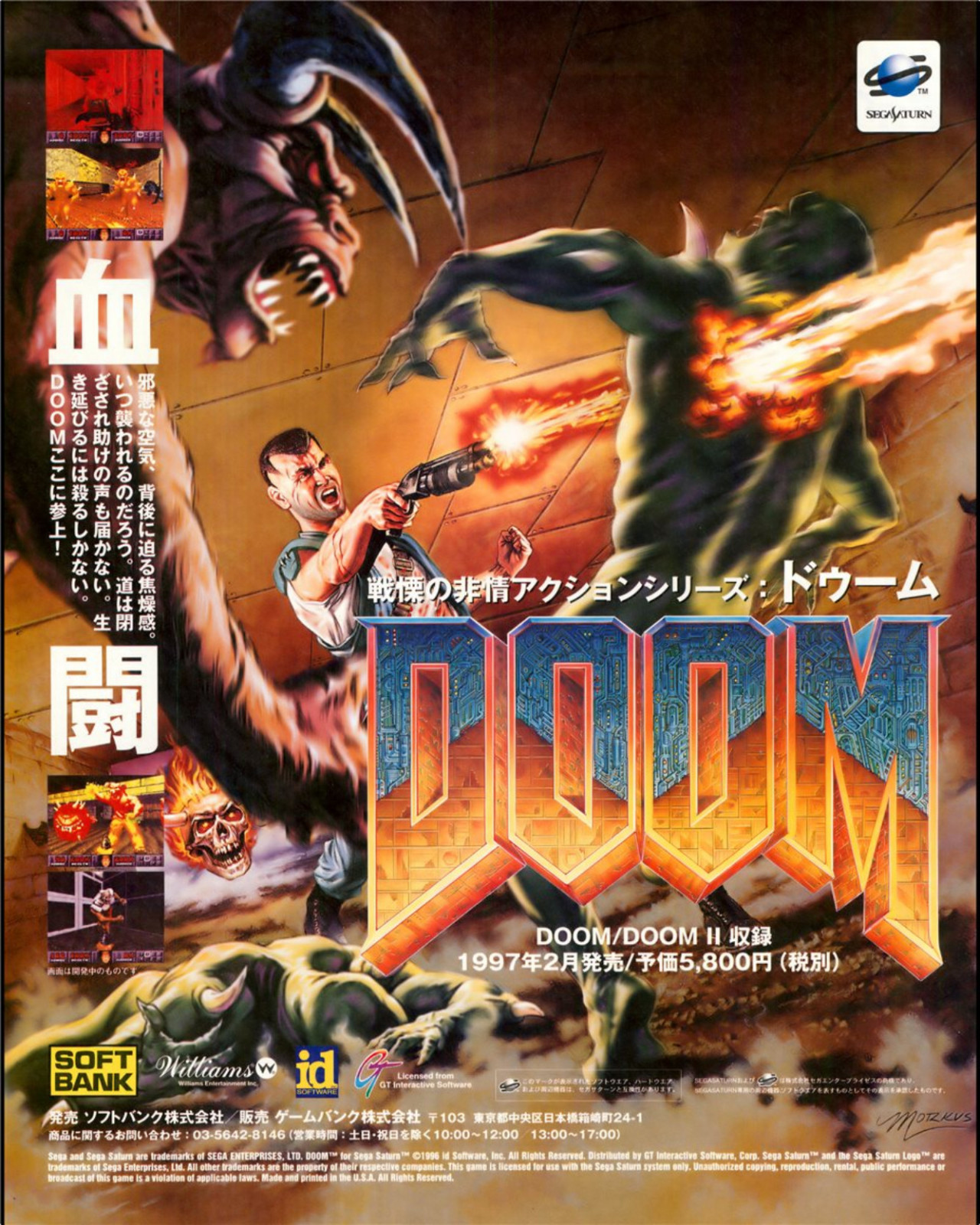 So I replayed Doom and Doom II, and gotta say I had a lot of fun. I did use cheats, because this was a novelty check-off-the-backlog sort of run, but yeah, Doom is one of the most important video games ever made, and Doom II is the masterpiece that followed it. These games are literally older than I am (can’t wait for 4th grade after all this coronavirus stuff blows over!) and seem to hold up better under the stress of time. I needn’t tell you that. Doom 3 on the other hand, is tremendously identifiable as a product of its time the way goths looked around the time that American Idiot released. And just like Green Day, I think it’s safe to say Doom peaked in the ‘90s.

(Another aside: Yes I really liked Doom [2016], which I’ve started calling DOOMk16, but for the sake of not argument, let me just say that the original game broke molds in ways that any sequel simply couldn’t, and while maybe I prefer the 2016 game [I don’t know that I do.], that ain’t the point.)

So what’s what with Doom 3? Graphics. “Hey look everyone, we have graphics! Look at ‘em! Look at our graphics!” In 2004, Doom 3 probably knocked socks off, balled them up, and shoved them down your throat. The visual redesign of the Hell Knight, that musclebound menace adorning your Xbox copy of the game, probably made you turn to your buddy--with whom you might have been leaving the GameStop with, on your way to catch up with Will Smith in iRobot at the multiplex--remove the game from your plastic bag and point at the Knight, going “Dude. Look how sick this looks.” Indeed, dude, you likely decided to pass on Del Spooner’s exploits amidst a robotically-serviced society, trouncing upon the corpses of demons and Martian ghouls rather than the literary process of the long-dead Isaac Asimov. 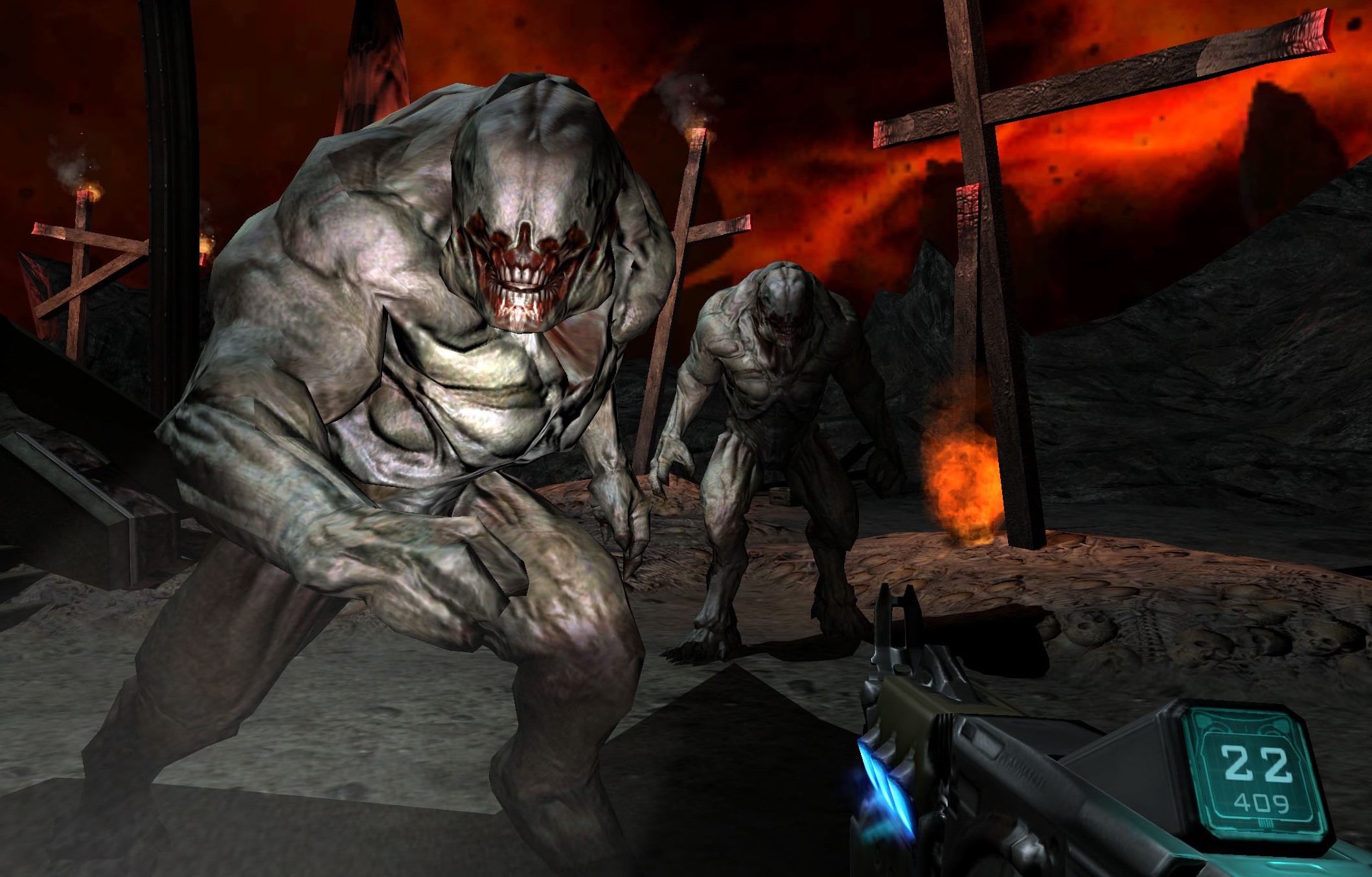 The game’s controversial flashlight function, in which an unassuming workman’s flashlight is relegated to the same importance as a space marine’s chainsaw or 12-guage, was “fixed” for my playthrough of the “BFG Edition,” so perhaps mine wasn’t the true Doom 3 experience. In which case pal, boy did that game have problems.

The ability to flash a light while also flashin’ a gat is a welcome aspect of modern Doom 3, because the halls of the UAC facility, blood-spattered and positively cold with corporate marketing, are darned dark, let me tell you. To its credit, Doom 3 uses its lighting (or lacktherof) quite well. Which is to say a video game actually uses lighting as a genuine gameplay mechanic. There are portions where you just can’t see the hand held in front of you if it weren’t for your flashlight, and naturally the dynamic of battling Hellspawn with the lights out is one more terrifying than battling Hellspawn… with the lights on. The BFG Edition’s added shoulder-light changes a lot of those encounters, and while I don’t know that the original, “pure” experience would yield me a drastically different opinion, I certainly made note of the difference. I wonder if the writing was as out of this world incredible as the BFG Edition? 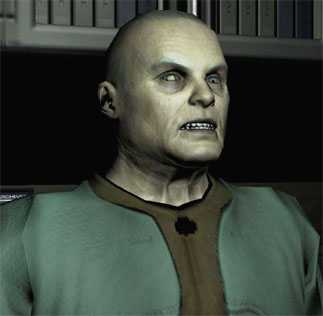 That’s sarcasm; Doom 3’s “story” is about as verbose as a three-year old explaining Dante to you (something I’d now be curious to hear). I recall something about a mad doctor messing with portals that shouldn’t be messed with, his research and passion for science putting all of reality at risk for an all-out invasion by our friends from down under. The narrative is nothing but a track to glide along, with the dialogue of the hammy kind. I should have kept count of the number of times I was reminded my soul would soon not be mine.

I can feel your look. “I don’t play Doom for story, you nincompoop!” Neither do I! So why did id think we would? That dang Gordon Freeman, that’s why. 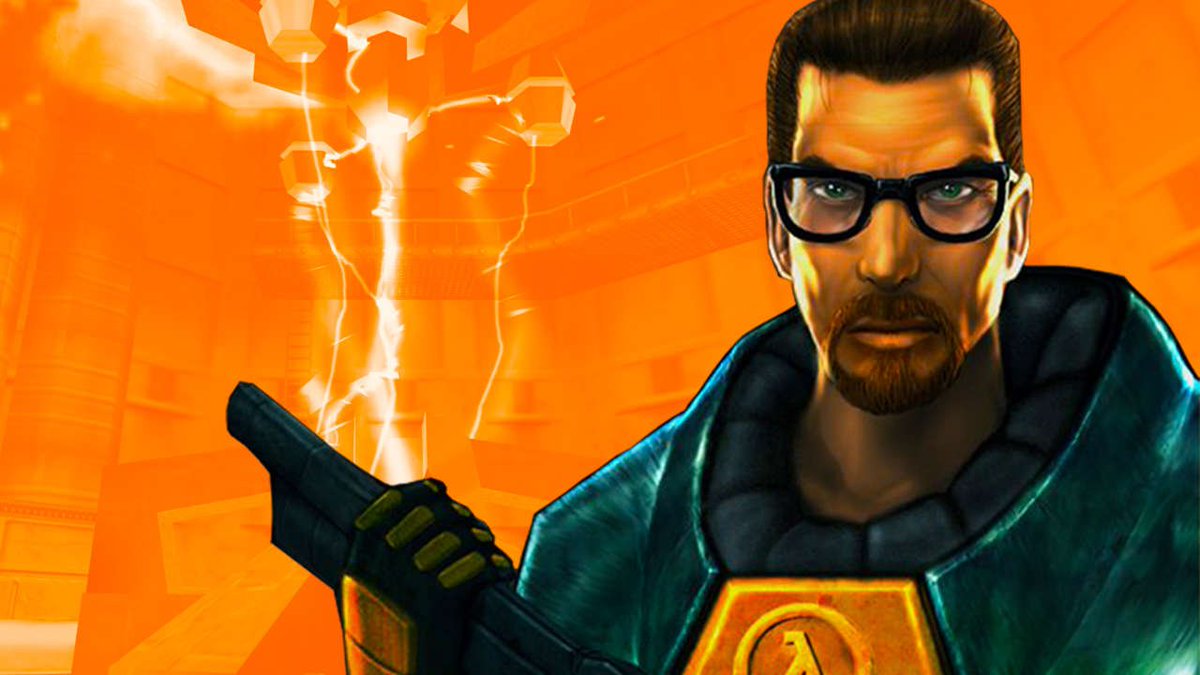 Masters of Doom, the aforementioned chronicle of Doom’s inception, touches upon the impact of Half-Life on the id boys, with many of the crew initially deriding the game before it hit the masses, essentially laughing at the notion of wanting story in a shooter. That’s crazy-talk! One gaming empire later, Valve was clearly on to something, and while the id crew was perhaps skeptical, there were longtime employees like co-founder Adrian “Not Related to John” Carmack, who himself longed to channel his artwork into something more than just double-barreled shotgun fodder. Well, the time for tales is now.

I don’t purport to have any inside context for Doom 3 besides having just read Masters, but it seems pretty clear that the game is a reaction to the Half-Lifes and Halos that were popping up near the turn of the millennium (how often do you get to use that phrase?). In that sense, Doom 3 goes against what makes Doom, Doom. To dismiss the original games as purely visceral adrenaline rushes, devoid of any real atmosphere would, of course, be a mistake. There’s terror aplenty in the early, dark halls of Hell on Earth, and, I mean, look at that lighting! Or all the gruesome corpses strung up like it’s Satan’s personal Louvre! But first and foremost, Doom felt good to play. And Doom 3 ain’t much in that respect.

I’m only half-kidding when I say that a shooter lives or dies for my by how good its shotgun is. BioShock? That pumper packs a punch to the face of any mutagen-addicted freak who wants to show you his lead pipe collection a little too close for comfort. Or Rage, the sort of controversial id Software release that was like Doom X Mad Max. Great shotgun. Doom 3? You could safely put Doom 3’s shotgun in the hands of your worst enemy and have pretty good odds of coming out on top with the lint and gum wrappers in your pockets. 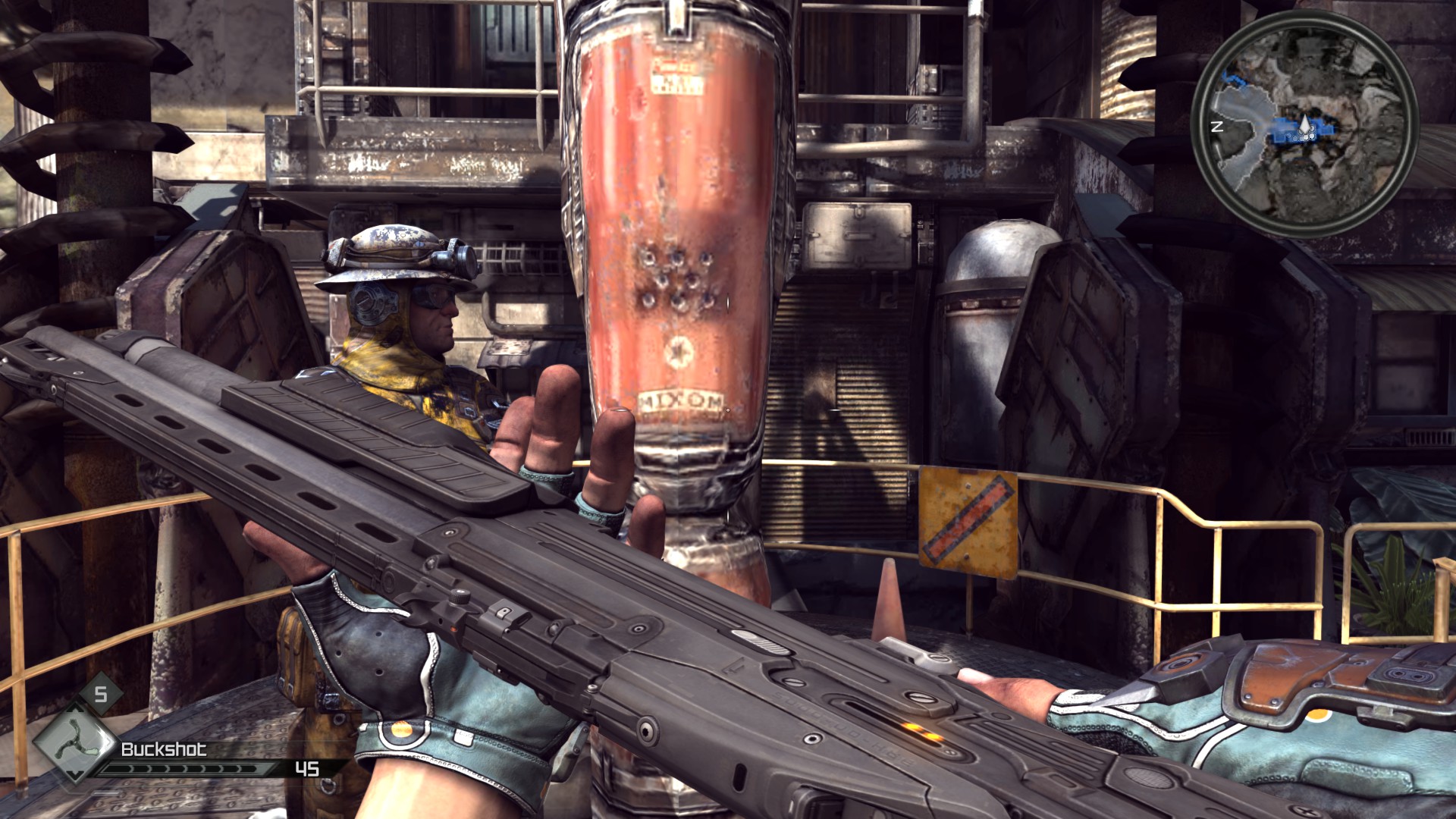 There’s no oomph where there should be, with enemies merely grunting or spewing a little ketchup in reaction to shells of hot buckshot hurled their way. This, of course, applies to all of Doom 3’s firearms. The puny machinegun just pelts away at the undead until they get deader, while I won’t even give the pistol the time of day. The plasma rifle has that weird delay to its projectiles, and just… eh. Lame! It’s lame. Doom 3 is lame. Done, that’s it. I don’t feel like writing anymore.

And yet, as I was playing through it, I didn’t necessarily want to gouge my eyes out and call it a day. (Third aside: This is probably too forgiving, as I’m somewhat of a masochist in my gaming. Once I start something it’s only with a long talk with the Inner Council that I’ll not finish it. I just, y’know, gotta start what I finish. So, while not admirable by any stretch, my tolerance for Doom 3’s mediocrity in 2020--Year of Our Lord Tom Nook--might be higher than others’, and so my forthcoming “praise” unwarranted.) No, I eventually fell into the routine of blasting through Doom 3, paying half-attention, much in the way you might turn on TV. Much in the way many of game when we’re zoned out, tired, bored with time to kill, etc etc. I was able to beat Doom 3 because it became my resting state after a day at work, or the 30 minutes I had before leaving; when there was too little time for a movie and no attention span to read or write, from an era where soda was still cool and David Bowie still alive, Doom 3 was there for me in all of its mediocrity.

And for that, I’m grateful. Not really, because it was lame, but I got through it. And you can too.