Sales Are My Kryptonite 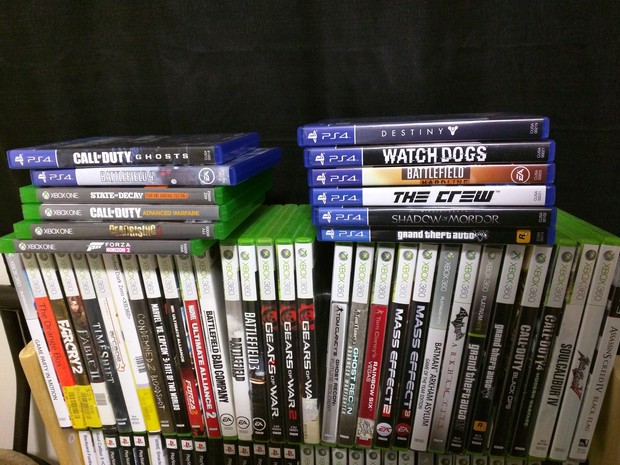 I was recently talking to a few of my coworkers about gaming. I think we all agreed that the perfect day was waking up, eating, gaming, napping, eating, gaming, …repeat until you have to earn money for electricity and high speed data. One thing that we all had in common was the fact that we still had quite a lot of games we still needed to play. I know I have Xbox 360 games that are still sealed. One of my coworkers said he had PS2 games still in the wrapper as well. How did we get like this? Is life really that much in the way that we have unwrapped PS2 games. I’m ashamed to say, but I do have some Dead Or Alive PS2 and Xbox games I have yet to play. Yet, that didn’t stop me from getting me an Xbox 360 when it came out.

My justification at that time was that I couldn’t play my favorite next gen games on the old consoles. I wanted to play games in true HD. I had just purchased a 3D HDTV. I needed to play Batman Arkham Asylum in 3D. I did the same thing when the PS4 and Xbox One came out. I purchased both systems, and I know have PS4 and Xbox One games that I have yet to play. Of course, I can use the excuse that I have no storage available on my PS4.

Still, I rhapsodized how I could still be doing this. I know what my reasoning was: SALES. Initially, there weren’t many games out for either system. I purchased my PS4 first and bought Battlefield 4, Assassins Creed Black Flag, and Call Of Duty Ghosts. I have yet to finish any of those games. I’ve started on each but never finished one game. Black Friday came around and every store was offering incredible deals. I purchased the Best Buy Gamers Club Unlocked and that was all she wrote. I bought more games. At the same time, I was seeing more Xbox One games on sale than PS4. I rationalized that I needed to get as much as I could out of GCU so I purchased an Xbox One. I purchased even more games. I have yet to finish one next gen game.

I had Gamefly, and it was a waste for me. I would play the game a few times and then forget about it. I kept Far Cry 4 for two months to only play it once. By that time, Target had a couple of sales of buy 2 games and get one free that I had to jump on. Every week some merchant was offering a game I wanted on sale. Now to me, a sale on a next gen game is 39.99 or lower. The game has to be 39.99 for me to even consider it. 29.99 has me watching gameplay on youtube. 19.99 has my sale.

Now don’t get me wrong, there are times where I will play daily for weeks and then stop. I was playing Forza Motorsport 5 daily for almost a month. I even bought the Thrustmaster Ferrari 458 Spider Racing Wheel. I used the wheel maybe six times, if that. Ebay had a digital code of Forza Horizons 2 that was $27. At the time, the lowest I had seen the disc price was $48 from Best Buy. I’ve played that game twice. That’s it. I went back to Forza Motorsport 5 and then Halo. Then I stopped playing for a few months. In that time, I probably purchased more games.

I watched E3 to find out what other new games I could purchase. It’s like a sickness almost but it’s really stupidity. I justify these purchases by saying I got these games on sale; when if I had just waited until I actually got around to playing the games, the prices would probably be lower because newer version would have been released.

The sad thing is that I will probably purchase Forza Motorsport 6, Need For Speed, and Rainbow 6 Siege when they’re released for them to sit on the shelf with the rest of their friends until I get a chance to play them.