Good morning, good afternoon and good evening! Welcome to my written Let’s Play of Borderlands 2, dubbed as the “Venture Into The Borderlands” series. Sorry for the name, but it just sounds snazzy to me and I couldn’t work out a graceful way of putting the number “two” in there.

Basically, this Let’s Play was born out of my want to finally experience Borderlands 2 and my lack of ability to do it without having a purpose to it. I did consider doing it as a video but, well, it is a 20+ hour game I think. So I thought it’d be more painless to everyone involved to do it as a written style, like a Borderlands Bard speaking of wild stories over the roaring campfire flame. Basically, every week I’ll spend five hours on it and then write up my thoughts and what has roughly happened. It could be me analysing the game, it could be me just throwing my opinion around or it could be me slowly being driven insane by the tidal wave of memes.

I think there are memes anyway…

I’m pretty much playing it off-the-cuff, with the hopes that people enjoy this study into Borderlands 2, likely including its DLC. 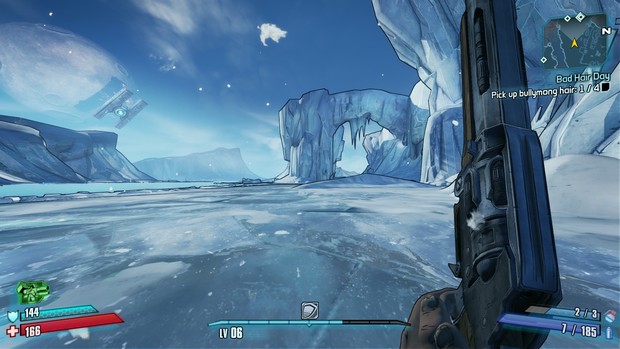 At least more than I did collecting hair from beasties for someone’s hat.

Everything in Borderlands 2 will be new to me, so really you will be getting an unfiltered slosh of opinions of the piece. Although I do have experience with the franchise, completing Borderlands (and most of its DLC) and playing through Tales From The Borderlands whenever the episodes get released.

I have to say though, stumbling upon this guide, it really offered a strong start to the game. All those codes? You better believe I entered EVERY. SINGLE. ONE. Yes, including the ones that give you something depending on the level of the character you load up next. A lot of the Golden Keys didn’t work, but I worked out I got 133 keys to play with. More than I’ll need, in fact probably quadruple, but I guess it is handy to just keep in your pocket just in case.

With the key entering done… Let’s start up the game!

That’ll be the 5 hour mark for me done and, well, I can barely remember much of what happened. It is weird. I can sum it up in a sentence the events so far, but not much more specific than that. I decided I’d go with a character that was an all-rounder since I was playing alone, one without an Achilles heel but also without a particular area of strength. So, Axton it was and off I went on my journey into the Pandora wastelands.

I have to say though, wow, everything feels so unusual in comparison to Borderlands; like starting the game already mostly fully-equipped, rather than slowly introduced gently into the water. I guess it was a reflection of the rather silly idea to input all those codes for my first play-through, as I was over-whelmed with all the various things now clogging up my surprisingly small inventory. Oddly though, the thing that struck me the strongest was: “HOLY SHIT, YOU FAN THE REVOLVER?!”.

Although some things don’t change at all. In this case, it is the series still clinging onto the idea of Claptrap being a vital part of the adventure; as well as having a shared vocal/visual hallucination called “Angel” who assures you that you shouldn’t just shoot Claptrap and have some peace-and-quiet. Although, this time around, Angel feels the need to occasionally swear and then correct herself. 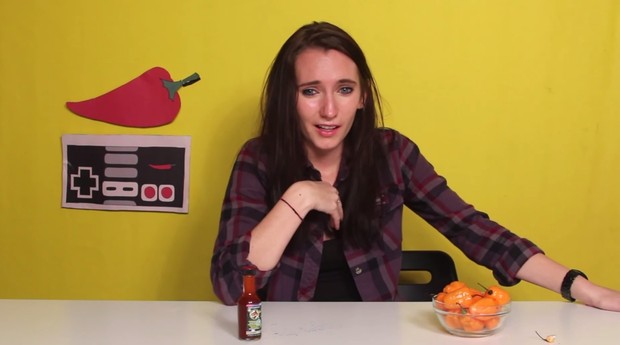 A habit the actor behind Angel, Britanni Johnson, also does after downing a hot pepper doused in hot sauce. Just with less correction and more apologising.

I still don’t fully understand the anti-humour in being forced to subject yourself to a painfully bad comedy character. Claptrap is like one of those Family Guy sketches that go on way too long, in the hopes that it resurrects humour in a Dr Frankenstein manner, except somehow (using science fouler than necromancy) less funny and more painful to watch. Perhaps there is an endearing aspect to Claptrap I’m just not getting? Maybe there is something I’m missing to this Stewart Lee performance that lacks the high-brow intelligence and the self-awareness of the stand-up?

That’s why I always struggle to judge a comedy act: Since comedy is subjective and perhaps it is funny to someone. Me though? It just feels like a burden that everyone was aware could irritate people, but the development team didn’t want to waste all the many hours spent writing and designing the sodding character. It is as though Roy Chubby Brown’s mind got trapped into a child and now you had to supervise him and all his painful humour; while others went off to fix the freak scientific event plaguing everyone. That if you just left Roy Brown to his senses because you can’t be bothered with his Daily Mail-inspired routine, he’d probably play in traffic, get himself killed and permanently doom the world some how.

Fuck… How did such an irritating character (something the game seems aware of) become a staple of the series? Maybe that’s why Tales From The Borderlands feels funnier and better? No Claptrap… 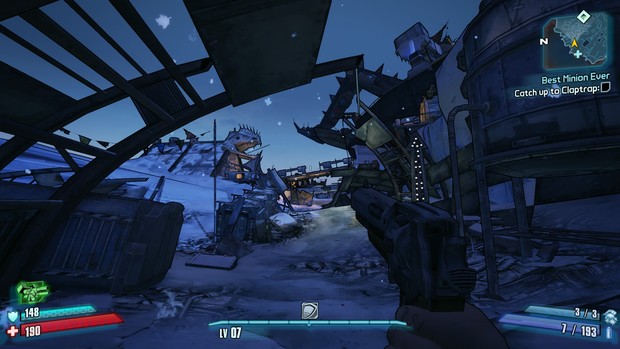 No damn need to drag the “Best Minion Ever”, as the game likes to boast, around as he makes foul guttural noises called “humour”.

…Anyway, this time around rather than just being a bunch of hoodlums looking for a vault, you are vault hunters betrayed by your employer Handsome Jack. So, naturally, since he tried to fire you (with explosives into a charcoal dust form), you must liquify his assets (which by that, I mean you must render him and his everything into dust and a mixture of bodily fluids).

In 5 hours, I helped Claptrap (who is annoying), helped someone with the worst English accent (who is annoying) and helped various bosses to end the prolonged psychological suffering they must have been experiencing up to this point, with a swift execution (who is also annoying). Yes, the cast of characters do frustrate me, especially as each one seems to be trying to do their own stand-up routine as though I was playing a particular funky, vibrant and nitrous-oxide toxified version of the Edinburgh Fringe Festival. Especially since each one felt a sprinkling of memes is the way to go (e.g. SHUT UP AXTON WITH TELLING PEOPLE “COOL STORY BRO”).

Although, yet, I was only bothered by Scooter. Was he always so… Raspy? There just feels a constant creak in his voice that I’m sure wasn’t there before, as though someone forgot to squirt some WD40 after the original Borderlands performance. IMDB and a Borderlands Wiki website all say it is the same voice actor but… I don’t know…

I managed to try to meet up with Roland in Sanctuary only to discover he is on a top secret mission and may be in trouble. So, because the voice in my head told me to, I may have to go rescue him which will happen next week. Although Rolo seems good enough to handle whatever danger he’s in personally, but I guess the game needs a reason to usher me out of Sanctuary like a busy parent at Christmas telling me “Just… Go play with your toys…”. 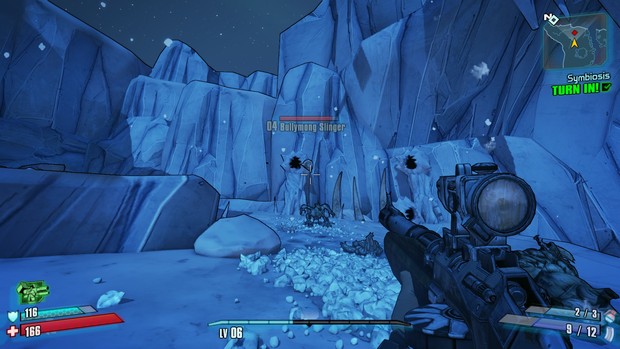 I think the other thing that really interested me as I was playing through was the odd achievement list. The original Borderlands had a list of mini-achievements (e.g. shoot so many of an enemy, use a particular gun, etc) with no pay off, while giving you a bonus depending on how much you use a particular weapon. Borderlands 2, however, let’s you earn tokens via achievement grinding which can be used to boost vague things such as melee damage, reload speed and shield recharge rate.

So, of course, after being told by the game to go play outside because plot is busy, rather than go help Rolo I went to an icy lake to go play baseball/skeet-shooting with the local wild-life. After all, if I can reload a whole 1% faster while Roland is likely being tortured, having some shotgun mouth-wash and then thrown out for the skag to chew on, then Plot can hopefully learn the folly of telling me to just go earn my narrative. Especially since, so far, Plot hasn’t earned my attention quite yet. 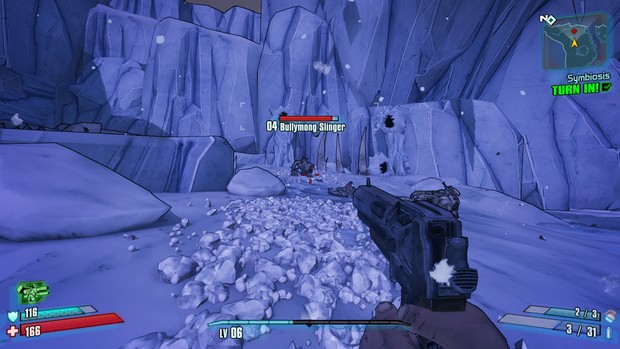 Currently though, including some ups and downs I’m saving for later weeks, I am actually enjoying it a bit more than the original Borderlands in terms of the gameplay. Sure the writing is weak, although the memes aren’t as invasive as I was warned, so far the gameplay is enough to keep me on my toes. Despite this, it is unknown if the fun of the gameplay will last.

Hopefully next week the story picks up or I’ll be probably playing football with the skags next so I can crank up my melee damage by 0.4%. I don’t think Borderlands 2 wants me to, like Nero, play on my lyre while Sanctuary burns. 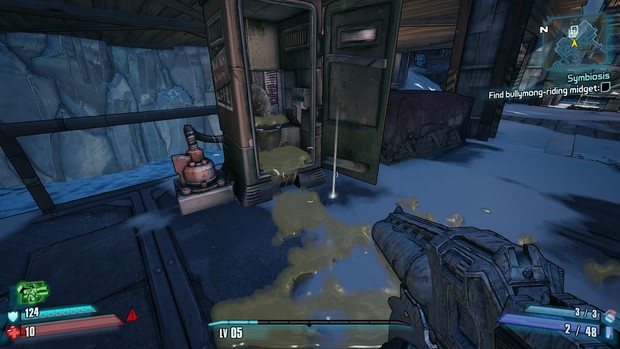 I wonder if this is symbolic of something...