How does Capitalism work?

We'll get the obvious joke out of the way first! "It doesn't." Hah! Oh, what a good laugh we've both just had. That was quite the chuckle indeed! Ok, are you done laughing? No. I'll give you a moment. How about now? Ok. Well I'm going to continue and you can just catch up once the tears stop rolling.

Capitalism is supposed to be governed by a simple system of supply and demand. When supply is low and demand is high the prices will rise to reflect this. When supply is high and demand is low they will drop. The foundational price for something obviously includes things like the cost of raw materials, staffing costs, and other overhead. 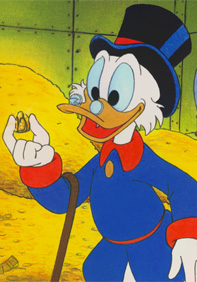 This network of costs can be really hard to pin down. Often we use the notion of inflation to discuss how much something is worth now compared to how much it was worth in the past. You will be surprised to learn that inflation is a bit of a pile. And not a fun pile like a bunch of rare magic cards, no, it is more like that stinky one that your pet, child, or drunk roommate surprises you with.

Inflation is a lot like temperature. In that 0 degrees celsius is a whole lot different than 0 degrees farenheit. When someone tells you that inflation has increased the question you should ask is in what way? Are they talking about food? If so, what kind of food? Because depending on how your country handles taxation or subsidies the price of certain foods will be uncharacteristically low or high.

Is it technology? What external factors are in play to alter the price of that technology? Has a new method of production dramatically lowered the price of the good or has a key resource in that good ended up rare? Are mission critical metals locked in a currently war torn country?

These factors and more are all in play when the conversation about inflation comes up. Ultimately it is something of a boogeyman. Cost of living in the US is dramatically different with just a single days drive in almost any direction from where you live now. I'm paying 3 thousand dollars in rent for a tiny apartment right now. When I lived in Washington I was paying almost 5x less for a larger place in a nicer location.

"Alright, Mr. Funny Penguin." You might be saying. "Are you arguing that game development hasn't gotten more expensive?"

Well, to be frank, no it hasn't. Actual development barriers are lower than they've ever been. The ease with which anyone can make an entire video game and publish it is beyond incredible. What used to be a walled garden that kept everyone out is perhaps a little too easy to get into now. Steam sees ~200 new games a month. That means that in under 4 months there are more new games on steam than the entire NES library.

And on mobile phones it has gotten even sillier. Mobile phones see hundreds of new game releases daily. There has never been an easier and cheaper time to make video games. The question isn't whether or not video games have gotten more expensive to make. Or at least it shouldn't be because objectively they haven't. The question is whether nor not expensive games should charge more.

Oh dang. That headline came out of nowhere and now I'm intimidated. Well, since we are talking about expensive games I guess we don't need to create a bad faith narrative about how developers need to charge more in order to stay afloat. That's good because I'd surely hate to see that. Given that developer salaries have stagnated while CEO compensation has climbed nearly 1000% since the late 70s.

Though in their defense I don't know where we'd be without their ingenious ideas on how to make people think video game prices have not changed since I was a kid. When I was younger video games were a strange strange beast. You'd buy a game and it would come with unlocked and locked content. At that time you would unlock the additional content by accomplishing tasks set forth by the game. It was weird because it was really fulfilling and it meant that the game would always be feature complete.

Life is a lot better now with every game having a built in shop. Special editions. Loot Boxes. Season Passes. Store Exclusives. Timed Content. All of these things really enhance the experience and help me to part with more money. With an enormous portion of that money helpfully going towards investor and C level employee packages. In this way I feel rewarded because I've done my part to make extremely wealthy people far wealthier and isn't that really life's greatest reward?

But I'm getting distracted. Let's look at an expensive game and do a bit of math here. I'm going to pick a game that had a really rocky development history and that took ages to finish. This way we can look at a really bad situation for a "big" game. Because again I think we can all agree that acting like indie teams are out there charging 70 dollars is pretty disingenous.

Overwatch was originally going to be an MMORPG. I couldn't tell you what exactly lead to them pivoting but it was described at Blizzcon as just "not being fun". So they decided to take a bunch of the characters and various world concepts from that project and make an Arena shooter out of it. Because of all of this lost time and employee salaries on top of the actual additional time spent developing Overwatch the total cost to Blizzard was between 50 and 170 million dollars.

I realize that sounds like a really large range but you are looking at something like a 10 year development cycle, lots of employees, and I can guarantee a number of badly budgeted decisions. Been in this industry long enough to know that folks just kinda toss around cash near the beginning of projects.

Alright, so we need to make at least 170 million to break even. I'm going whole hog and assuming the worst. I can see now why people think we need to pay more! That's a lot! How much did Overwatch make in the first month of sales? What's that? 269 million? That's *counts on fingers* a lot!

And don't even get me started on the over a billion dollars in loot box sales! Dang...I got started didn't I? Well that's all I had to add.

Ok, sure, but what about the most expensive game ever made? I'm not sure if anything has past it but the game that comes to mind is Destiny 1. A game that literally used "We blew a bunch of money." as their marketing campaign. Sitting at half a billion dollars. I'm stuggling to find exact lifetime sales for the game but I did find that Activision Blizzard stated that Destiny and Hearthstone combined made a billion dollars. As of 2015, ~8 months after it released.

So would you look at that? They are 1/10th of the way to starting a moon base with 2 games. 2-3/10ths of the way if we include overwatch.

Do you really want to deny companies the kind of income that used to be relegated to nation states?

This is a pretty good question. I've been thinking about it for a while and I guess I can see where people are coming from. Is there any good reason that Bobby Kotick shouldn't earn tens of millions of dollars a year? I mean, ok, yes, his investors are actually arguing right now that he shouldn't. But we both know they are just in it for the money. Should Andrew Wilson have to suffer with fewer tens of millions than Bobby? I don't know if I want to live in that world.

And Strauss Zelnick who reportedly brings in 0 dollars a year. Literally doing this all for charity. We should all pour out a 40 for him. (Please ignore his 3 million shares of stock in the company @144 dollars a pop currently. No, please, stop looking.)

So maybe folks have a point. Since the money won't be going to increasing wages for the actual staff making the games, and raising the price won't have any impact on the amount of monetization, and the actual quality of games won't change, maybe it is reckless to not pay more? If these companies don't have another record year of sales how will they afford to lay off hundreds of people?

Sure demand is orders of magnitude higher and supply is functionally infinite but does that really mean prices shouldn't increase? I'm thinking that perhaps, just perhaps, we have all been living high on the hog. Abusing the kindness of millionaires and billionaires who have really struggled to buy their thirteenth vacation home in the last 20 years.

I implore everyone. Pay more. Together we can do our part to help grow the wealth of people who would find us disgusting if we met them in person. It is through the combined determination of our wallets that we can truly make a change for good in the world. And perhaps once we start giving them more money they'll stop offshoring all their earnings to avoid paying taxes.

It turns out the twist was that there was no twist!

Thanks for coming to my TEDx talk. I hope you will join me in looking out for the big guy.

"Shit you got me, he is really cute."