3:50 PM on 05.25.2010 (server time)    0
Fellow DToiders, it has been a long time coming, but today marks a special day in my life. Not special like K, or special like me, but special in a much more tangible way. I'd like to share something with you today, which may or may not be relevant to your interests. Something that would make even the most complete collector jealous.

Many of you may be familiar with my first real blog, Modurn Warfairz Teaches You Things. Little did you know, it was a rousing success, and might very well be a worldwide phenomenon. At least in my head. So I decided to partner with Microsoft to bring you guys something truly special. 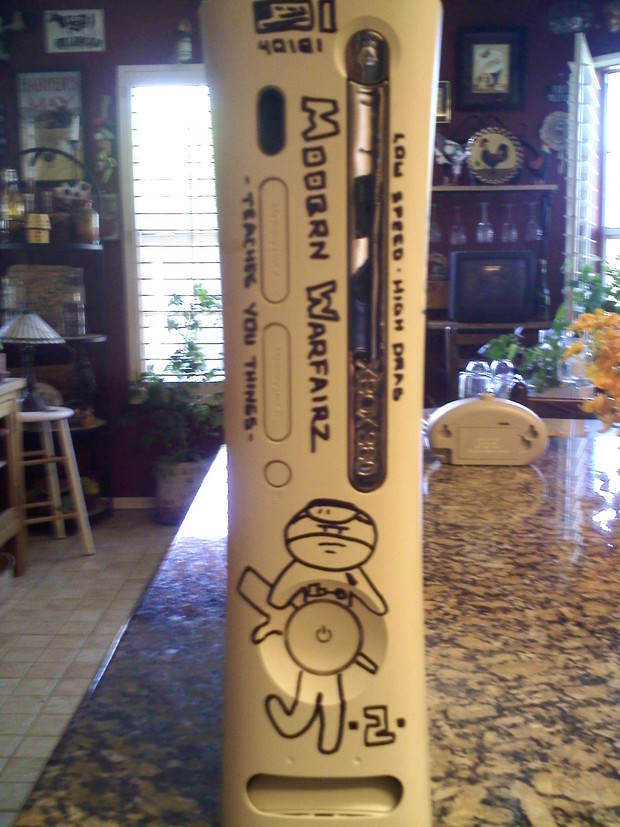 And we come to the front, mimicking the popular MW2 design, it includes several words and numbers that you may or may not understand. Neat! It's also got some other stuff too, but you can check that out later.

This special edition console is super limited, only 1 will ever exist in the entire world. Forget the fact that it doesn't work. Who needs a working system when you can have such class and elegance right in your own living room? Guaranteed to spice up any room or your money back.

How can you get one? I'm not sure yet. As it stands, this has been priced at a value of $1,500.00, plus I'm also using it as a makeshift table thing. But after spending a painstaking 20 minutes creating it, I feel the need to share it with you guys.