Which Game was Your Greatest Disappointment?

Last year, I hopped into No Man’s Sky. I’m usually late to a game, but in this case the wait was very intentional. You might remember that when the game came out it was met with bile and vitriol. To listen to early reviews and discussion, this game apparently lacked in quality in every way. On the dart board of wild, speculative expectation, the game hit the wall and bounced off.

I’ve had a great time with the game, but I jumped in four years late. A mountain of content, patching and tweaks have been made to the game in that time. “No Man’s Sky is good now” is a reoccurring suggestion online, a point which most people agree with. I am very happy I waited, and I was very confident I was going to have a good time.

The real reason I waited, however, was not just because of the early criticism. I’m pretty certain I could have enjoyed the original version. It’s definitely the sort of game I enjoy. No, the reason why I waited was because that original divide between ‘promise’ and ‘expectation’ was something I had seen before. As the game was released, I had a grim sense of déjà vu…

I was so disappointed by a game in my youth, that it makes me doubt the quality of games 13 years later.

This was a game I was so disappointed in because my expectations had been raised so high. I actually replayed the first half of the game multiple times to check I had not missed anything, which only reinforced the let-down.

Growing up, I played games on my PC or on my Gameboy Color. I didn’t ask for games very often, and when I did I always knew it was something I was going to play thoroughly. I had a lot of demo disks – usually with at least half a dozen games on them – and when I didn’t have a game to play I would go back and play the single levels I was given, looking for the next certainty.

Spore was the first game I remember being excited about before playing the demo. I hadn’t really watched many previews or demonstrations online before this, and if I did I certainly did not have such a positive reaction. Every bit of Spore I was shown, every game-play demonstration I saw, filled me with anticipation.

This was a game where you would (allegedly) take a single-celled organism, evolve them until they could move around on land, then develop their civilisation to the point that they could conquer kingdoms, spread their culture across an entire planet, and then, finally, take to the stars to colonise other worlds. 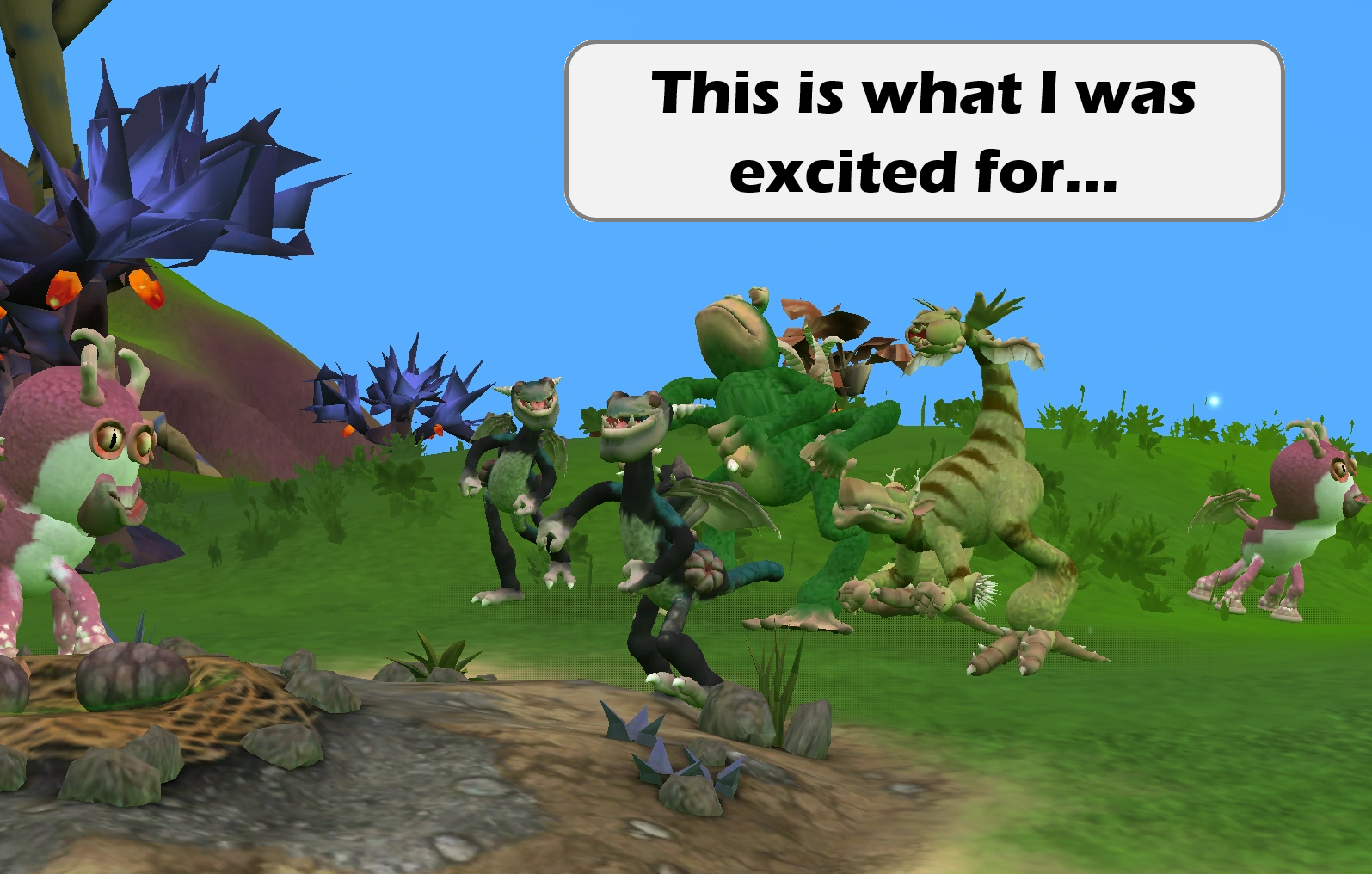 This was for me. Everything about what was promised had me thrilled. When I finally got to download the demo, my hopes were solidified. You could’t play the game (which should have been a bad omen). Instead, you got given the character creation feature. This was quite cool. You could bend and twist the body of your invented creature like they were clay. Wherever you put claws, eyes, mouths, they worked. I made dozens of multicoloured abominations, pushing and pulling the limits.

I declared with full confidence that this was the next game I wanted, that I would seize a copy ASAP, and that it would be worth full price.

You know earlier when I summarised the game? Evolving and developing your creation from microbe to explorer? Turns out that that isn’t the game. It’s in there, but what is there last less than an hour. There are just four, pathetic mini-games:

And that’s 4/5 of the stages of evolution done in under an hour. This was the part where I went back and played again. In shock, I went looking for more game-play. Maybe I rushed the experience? I’m pretty sure this is a game where I steadily evolve and civilise my own race of creatures, with great variety and complexity… right?

Most people told me that the space exploration is actually quite good. It’s a varied near-sandbox experience, where you meet other civilisations and terraform worlds. No one told me that this part of the game was good in a way that defended the game. It was always said as a consolation: at least this part is okay, I guess?

I honestly don’t know if the rest (or, let’s face it 95% of the game) was any good, because after a few hours after ‘fully evolving’ three races I gave up on each play-through. It didn’t matter if the space exploration was actually okay, I turned up for the chance to evolve a weird looking alien and build a culture around them. Instead I got four mini games and a lot of wide-open who-cares.

The more your excited about a game, the more you can be disappointment can be felt. If you don’t read or research a game before purchase, you should temper your excitement or risk a nasty surprise. The problem with Spore was that I did my checks, lapped up everything I could learn about the game. Little did I know, the morsels I was given were actually the entire game stitched together. It sounded like a game made for me, and what I got was a game that didn’t feel like it was made for anyone.

What is your greatest gaming disappointment? Was it something you were hyped for that did not deliver, or was it just a desperately terrible game. Did people around you peak your expectations, or was a the marketing overselling the product?

Thank You for Reading