The Gunblade – Videogames vs. History

Whilst I would never consider myself a violent man, I find weapons fascinating. Whether they are a work of fiction or non-fiction, I see them as curious inventions that say a great deal about our species. Our History is full of strange and striking creations of war. It’s when Fantasy and Reality collide that things get really interesting. 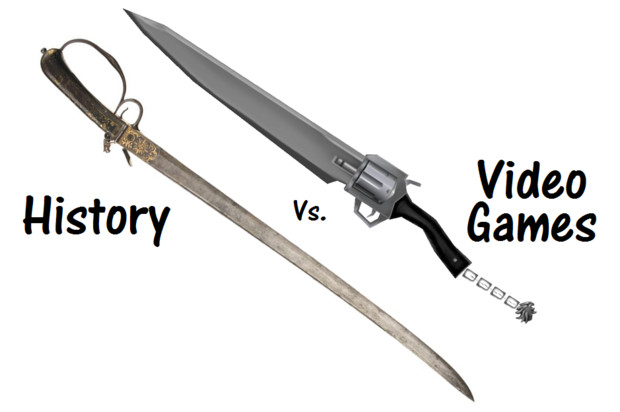 The “gun sword” sounds like something a competitive child would invent – “oh yeah? Well my sword is a gun as well, and I have a force field that lets me shoot out but you can’t shoot out…” – but the ‘Gunblade’ makes for a fitting weapon in Final Fantasy VIII (and Kingdom Hearts of course), and the concept of a Gun Sword has appeared in several video games and anime in one iteration or another. This bizarre weapon might seem entrenched in the realm of make-believe; the Pistol Sword is a very real thing.

If you haven’t seen a real Pistol Sword, you might want to take a moment. Depending on your view of war, this may look like to you like the most stupid/brilliant thing you’ve seen this week. And you are right: it is both stupid and brilliant.  The item would have been physically impressive but massively unreliable, and only a rich eccentric could afford to own and use a contraption like this. This particular fellow just happened to belong to Alexander Davison, best friend to Admiral Nelson.

Final Fantasy VIII rules dictated that the Gunblade is a melee weapon first-and-foremost; the ‘gun’ element can only be fired with the swing of the blade to maximise the attack. In reality, you could fire the pistol whenever you wished, but it would have been best if you got as close as Squall does to his opponents. Regular pistols were wildly inaccurate; never mind the addition of a big blade on the side of it.

Now I could list all the forms of Pistol-and-Blade combinations right here, but the teacher in me wants to give you a few examples and then let you find out more. See what you can find. You may start wondering, “why isn’t this in a video game?!” or at the very least you will marvel at how many nations throughout history looked at their weapons and thought, “That looks great and everything…I’ll bet it looks better with a gun on it.

So here’s the next example. It’s a little smaller blade, but something screaming to be uploaded into a video game.

The regular ‘Katar’ (or ‘punching sword’ if you want to be more literal) has found its way into a few fighting games, often exaggerated in size because [add penis joke here]. These items do well in video games; they look incredible and offer some simple-fun fighting mechanics. It seems so strange to think that the ‘Gun Katar’ hasn’t been adopted into more games. This particular example demonstrates the fun a game designer could have create the visual style of this weapon.

A little research will lead you to discover that this weapon was, historically speaking, inaccurate and impractical. However, video games are the perfect place to take an incredible concept and dispense with the logical arguments. That’s how we got to swords on the ends of chains, the portal gun…and that weird purple bat in Saints Row that no one will explain to me…

Here’s my personal favourite Pistol-Blade combination, which is definitely not a sword. 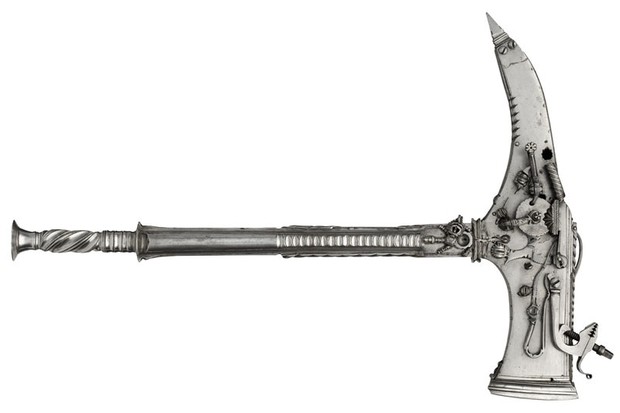 Look at this thing. This Axe-and-Pistol is a visually striking as it is utterly bonkers. This novelty item was way more of a showpiece than an actual weapon, and is one of many stored in the Tower of London. It has six barrels on it too - five inside the axe head an one in the handle. If anything, this is more of a war hammer than an axe, but I'm not complaining. Once more we see something begging to be uploaded into a video game. In real life, it's ridiculous; in a game with a steampunk vibe, this beauty would thrive.

If video games are going to continue to have weapons in video games, then game designers only need to glance through History to find gems like this one. This is just one example of the ‘Pistol Axe’ (this one impresses me because it’s so unnecessarily ornate) and having seen this alongside a Pistol Dagger and a Pistol Sword I’m sure you realise by now that this is but a small window into the sheer silliness of historic weaponry.

Gun-crossbow? Well of course that exists.

Oh and ‘that glove’ from Inglorious Bastards…that’s real too. It’s called the Sedgley Fist Gun. If it doesn’t appear in a future Assassin’s Creeds games, I’ll be very disappointed.

I’m not suggesting for a moment that we need more weapons in video games. We already have a steady stream of violent games and it’s always nice to see games that succeed without the need for fighting. But if a game is going to include weapons, it could do more than just copy the games that have come before. My favourite subject is filled with inspiration. Whilst many of these items prove too risky or outlandish in real life, they’d fit right in with all the other weird and wonderful weapons currently available. 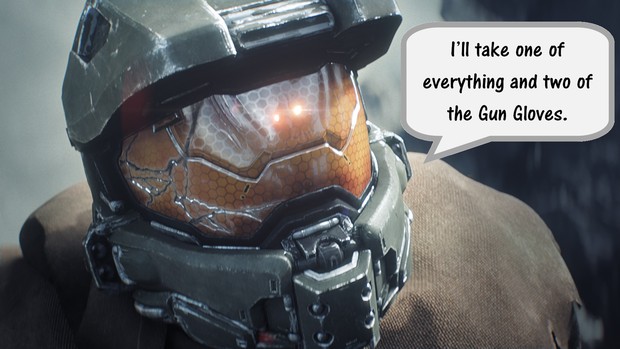 Go and have a look for yourself. See what other ‘Pistol-plus-x’ combos you can find. You might already know a little about this topic and want to share favourite examples below. Which games do you think might have been better if the creators had thought to take inspiration from this part of History?

You can contact the author @RedHeadPeak, or read the full blog on Wordpress.