A Curious Query from RedHeadPeak

Hello Destructoid, I was just wondering whether you’d like to read a story.

A lot of lovely readers have, in the past, remarked that my ramblings on History and Gaming might make for a good book. Truth be told, that is pretty much the long term plan for me. I’d love to one day write a History book that brings Videogames and History closer together. I’m a long way from that, but I’ve made a start. Having said that, fiction writing is also a route I’d like to explore.

I have stories in this half-empty, ginger noggin of mine. What I lack is the literary skill to do them justice. You, the Destructoid Community have been sympathetically kind to my blogging so far, and I’m curious whether you could tolerate a little story-telling. I thought it best to ask first. Whilst the story I have in mind is influenced by games, I wouldn’t want to waste your time with fiction if that’s not what you came here to read.

Whether or not the stories appear here, I will be using my blog to practice writing fiction every so often. After a year of writing – one blog almost every week – I’m trying to give more time to writing. I’m also planning to organise myself a little better. There are three kinds of blog I like to write, and from now on I will go through a four-week cycle. Look, I even made a little diagram ^_^ 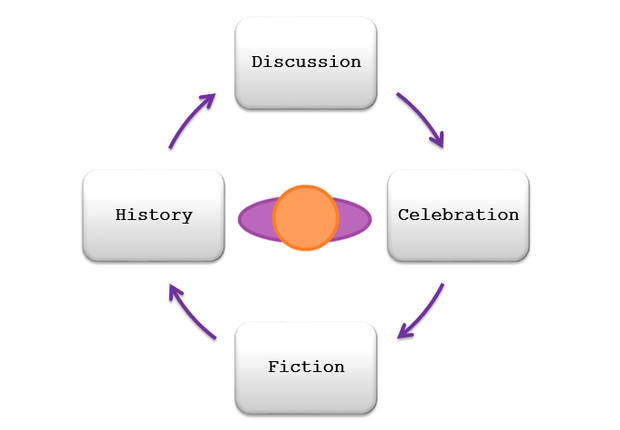 From a Gaming/History blog, to an open-ended discussion blog (the ones with questions in the title), to a blog which celebrates gaming (that’s where the Gaming Fantasy Dinner Party blogs will live). In week four, I’ll write another piece of fiction, and then go back to the History.

There are a few of you that might find it odd that I’m addressing the Destructoid Community directly. Since I began blogging in January 2014, I have been posting to Talk Amongst Yourselves and the C-Blogs. I enjoy both sites, but for now I’m more inclined to present my stories to you, the Destructoid community.

Whilst I read and enjoy everything produced in both areas (I’m not much of a commenter, but I’m there, tapping that little heart button and reading intently) I nevertheless consider the Destructoid community more of… well, my community. In the last few months the time I give myself to read blogs is spent more often with this site than with Talk Amongst Yourselves. Both have their merits, but if I’m to put my nervous, amateur attempts at fiction up for scrutiny, I choose Destructoid.

I’m much more of a casual observer than a devoted community member but I feel I know the personalities and characters here quite a bit better. There’s a strong group ethos here that, if I had more time, I would like to get involved with.

If you don’t want to see my fiction in the C-Blogs, or you don’t think it should be there, I won’t be offended. I know this community will be honest and upfront; that’s why I like posting my blog here. If that’s the case, I can tell you that there is no need to read further. Below is a sample of the fiction I’m planning to write. If you don’t want stories in the C-Blogs, leave your comment below now. If the majority says “no”, I’ll just post the story to my own site and skip a week. No offense will be felt. Unless you are mean about it. Then I will cry. A lot. And you won’t be invited to my birthday party. So there.

If you’re still reading, know that you’re about to wander into the first few paragraphs of my so called ‘story’. Currently titled Objective Survive, the tale is told in second person and is rife with references to game-play and game mechanics. It’s primarily a sci-fi adventure story, which begins with the main character (you) ‘loading’ into an unknown location…

A metallic chattering fills your senses. Your feel the edges of your teeth hum and thrum with the sound. You stumble in circles. Reaching out, you realise that you cannot see or feel anything. Your eyes are filled with a cold, milky haze and your heart is striking out in panic. There is no other sensation. Are you even standing on solid ground?

You blink, and then there are shapes. First, a giant solid grey rectangle spreads out beneath you. Concrete. You are standing on concrete. Your feet find the solid ground. Second, a dozen orbs of light hover around you, at the border of the concrete floor. Lights? Lanterns? Lampposts. Third, a large green box stands at one end of the concrete. A big metal house? A warehouse with a grey, corrugated door raised up to reveal the darkness within.

These hazy shapes begin to snap into focus. The texture of the hard surface beneath you fades into existence. Yellow lines flutter into place; this must be the car park for that warehouse ahead of you. The warehouse is also beginning to find its finer details. You can make out the crenelated pattern in the metal walls, and read the number ‘8’ etched tall and white onto the flaked, green paintwork. The floating lights have their poles beneath them now.

Why are your eyes finding it so hard to focus?

More features of this place drop into your perception. The warehouse, lampposts and car park are all surrounded by rows of metal fencing topped with curled wire. You turn about and see several more metal structures of varying sizes. More warehouses, each with its own white number stamped on its side, and its own a strip of empty car park. A single-lane road connects the network of buildings, snaking off into the distance. You are in some sort of deserted compound, but where exactly?

The sky is suddenly blue and cloudless. Suddenly cloudless? Did the sky only just become blue? It’s definitely the middle of the day right now, but for a moment there it seemed like…. there wasn’t a sky. You realise how ridiculous that thought sounds. How you got here is the real mystery, not whether or not the sky has always been blue. You resolve to pull yourself together. You should find someone to help you. You are clearly suffering from a serious illness.

You stride towards ‘warehouse 8’. After a few steps, you hear a sound. The first sound you’ve been aware of so far. It came from further down the road: a hard, abrupt pop. You turn your head, and the noise repeats. And then again, but this time it happens three times in a row. Three sharp claps. Then another three claps, a little louder and harsher than before. You stop and turn, head titled, listening like a puppy to the strange commotion. New noises join the performance, distinct from the last. Different sounds within the mix. Some claps are much deeper in tone, others raspier and sharper, others…are…well… they are…

…that isn’t clapping. You’re not sure if you’ve ever heard those noises in real life, but you recognise them now. As the cloud of clamours grows closer and clearer, you finally realise what those rapid noises actually are…

You run for Warehouse 8.

So that’s that. Quite the ‘rip off the Band-Aid’ moment for myself. I’ve published quite a few blogs by now, but my fiction writing has been a private affair thus far. After reading the segment above, you might suggest that they stay that way. And that’s fine. I’d rather honesty than false-praise. If you have some literary guidance to give, I’d appreciate it.

If there’s enough intrigue in what I have to offer, I’ll publish the full first section in four weeks’ time. Next week, I’m back to the History blogs.

As Always, Destructoid, Thank You For Reading