Hello, folks! Wow, it's been a while since I last wrote a blog. And, you might be rightfully wondering, "What the heck is 'Tea & Games'?" That's a good question. The thing is I didn't feel like writing a formal review or in-depth analysis, so I consider this neither of those. Instead, it's more of an exchange of ideas: imagine we're all sitting around a virtual table sipping tea (you might order coffee as well if that's your preference, but I highly recommend choosing one of the many flowers of tea on offer) and talking about games - this time, specifically about Sea of Solitude. Is this going to be a series, then? Well, I don't know. Guess we'll have to find out together!

For starters, what even is Sea of Solitude?

Sea of Solitude was developed by Jo-Mei Games, an independent developer from Germany, and published by EA under the EA Originals label (which is dedicated to funding independent games). It was first released on July 5, 2019, for PS4, Xbox One and PC, and in March 2021, it received a Director's Cut edition, exclusive to Nintendo Switch and published by Quantic Dream this time. It's worth mentioning that the version I played was the original one, so if you played the Director's Cut and see something different in my blog, please let us know in the comments!

Sea of Solitude grabbed my attention right at its E3 2018 reveal trailer. First for its aesthetics. Second, for the topic it was addressing. Solitude, as the title suggests, but also depression and mental health.

Let us talk about the first item. The game has a cartoonish style with strong colours, both when it's coated in bright yellows and oranges, shrouded in darkness or taking us through a snowy landscape. I do not exaggerate when I say that I had to cover my eyes two or three times when the brightness got real bright! It's not really a complaint - the pallets are quite charming! The drowning city itself, however, has little charisma. Based in Berlin, it does not offer much in terms of variety and eye-catching landmarks; a choice that might reflect the forlorn state of the protagonist's mind, but since we spend most of our time in the outside environments, it grew stale after a while.

Considering the size of the team and the budget, however, it's not a condemnable choice. What really irks me about the aesthetics is how the characters' lips do not sync with their voices, meaning that their mouths do not move when they speak. When you're not seeing their faces it's fine; but it gets quite weird when the camera is focused on Kay and she's delivering a heartfelt speech or worse, shouting, and her mouth is frozen. I confess I don't know much about animation, but would it be so laborious to add movement to the lips? I have a feeling this decision might've been based on aesthetic and not cost (though cost might've been an influencing factor), and is one I don't quite agree with. 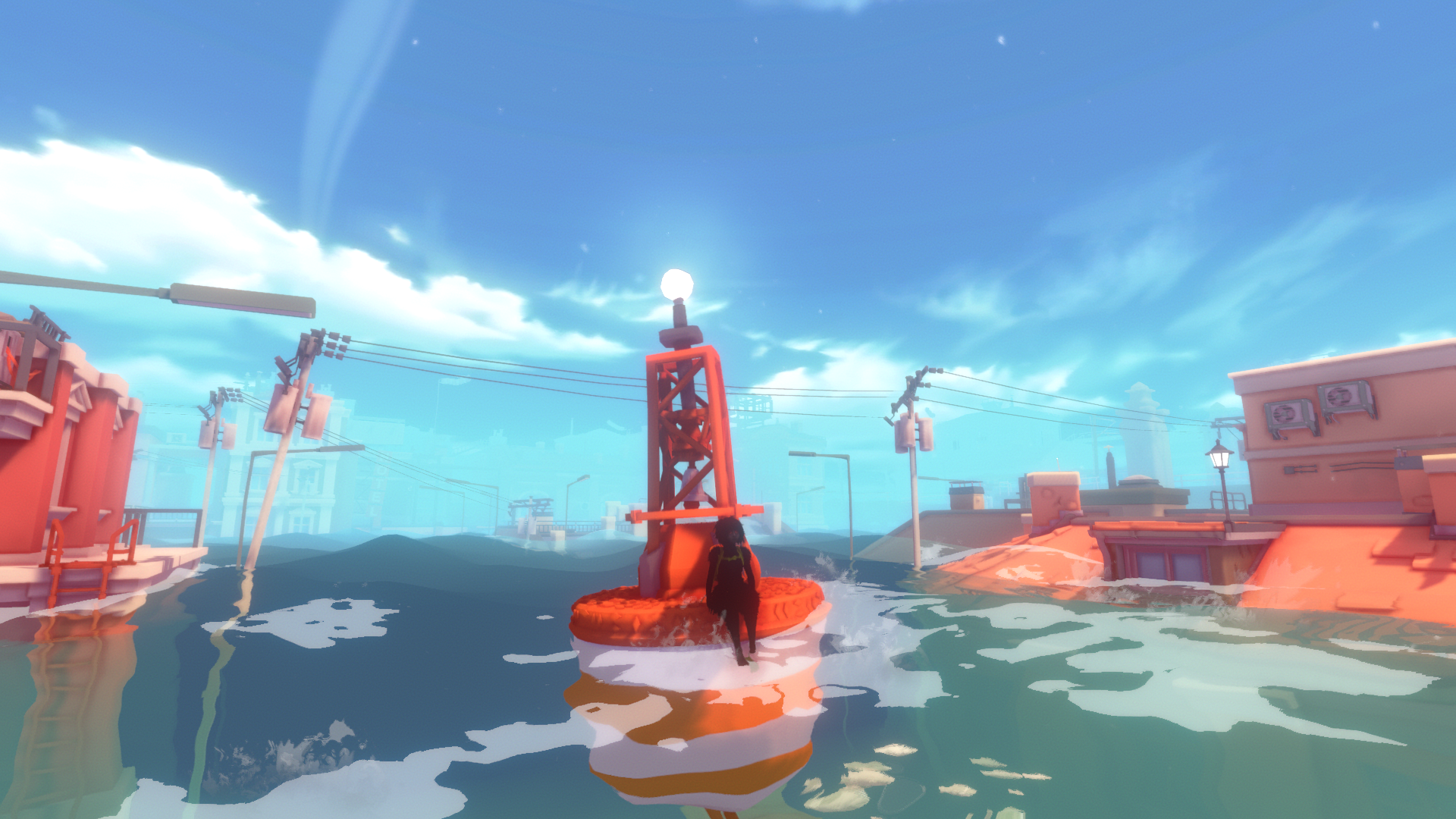 Gameplay is quite simple and straightforward. Sea of Solitude has no combat, relying upon transversal and puzzle-like challenges to advance. Other than walking, the only action Kay, the protagonist, can perform, is to light a flare to show her the path and help with some of the objectives. It's not so plain as to feel boring, thankfully in parts to the game's short duration: following the story path in a straight line, it's possible to beat it in a little more than three hours. While Sea of Solitude doesn't inspire much exploration, it does have collectables in the form of message bottles to read and seagulls to shoo, which might add another hour or so to the playthrough.

Also, let me just say how much I love that there's no fall damage - it's deadly to jump from high ground and feel nothing but a small vibration on the controller (I didn't unlock the trophy for jumping from a high point though...). Death doesn't come very often either: according to my experience, the only creature that can result in a fail state is the Whale, the sea monster that hunts Kay down during the game and will devour her if she gives it an opportunity (there's also a trophy for being eaten 20 times by the Whale - I didn't unlock it either 🤷🏻‍♀️ It kinda bugs me when trophies reward you for failing, but here's a question: is this Jo-Mei way of saying that it's okay to fall prey to your monsters as long as you don't give up?!). Other enemies will damage Kay but I do not think they actually "kill" her; there were times I was surrounded by the dark minions and, instead of receiving multiple hits, I was hit only once and then I was able to escape and "regenerate" before they attacked again. 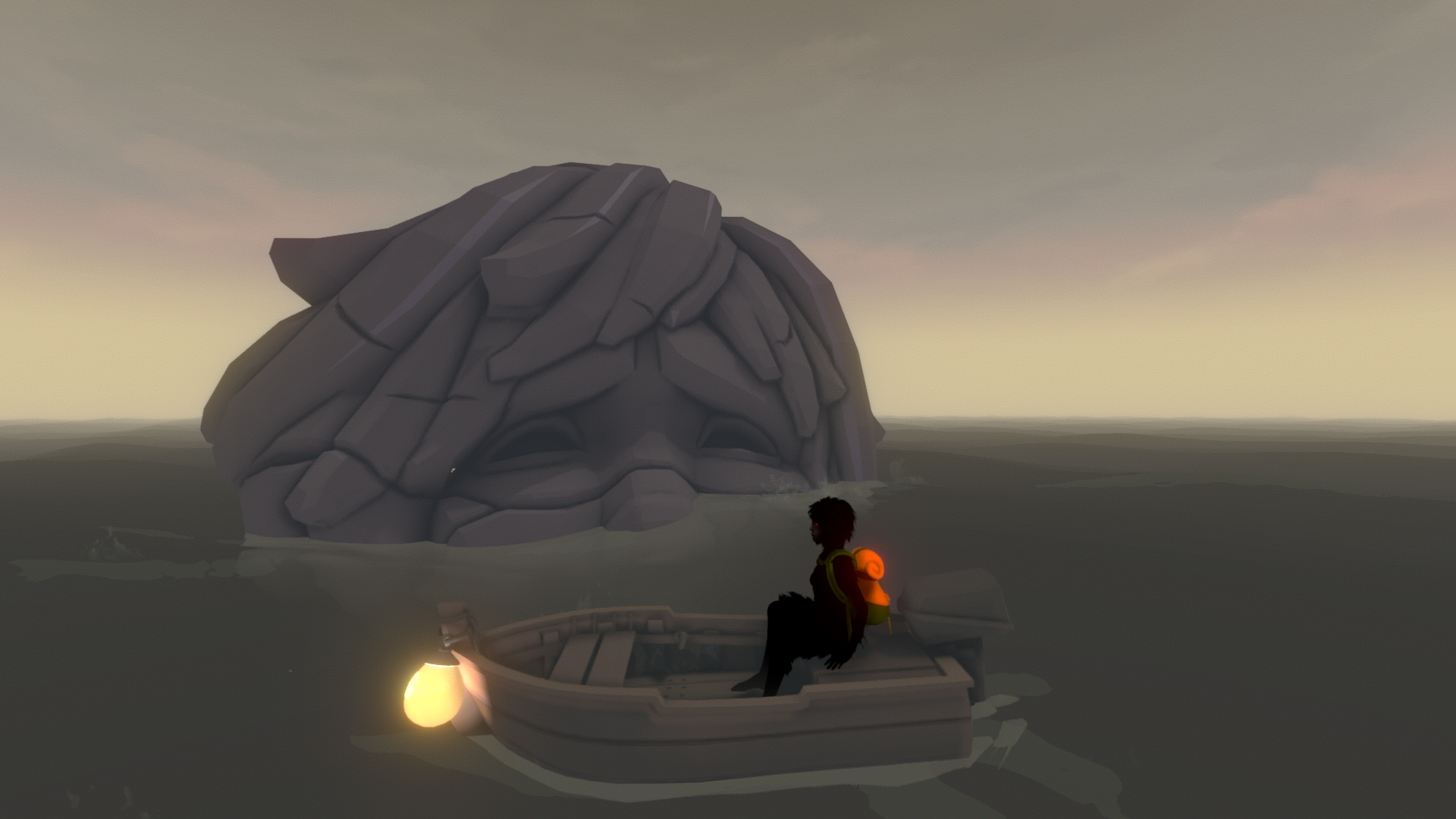 The narrative is truly where the game shines. Sea of Solitude is divided into twelve chapters with four major sections, each one dealing with one person close to Kay: her brother, Sunny; her parents; her (ex-)boyfriend, Jack; and herself; all of them turned into the figure of a dark, giant animal (aka monster) with red eyes. Kay relives moments she shared (and sometimes not, like when her parents first met each other) with each one, understanding that she may not always have been a nice person and her life has not been all roses. Living in this "universe" where she can only listen without much interference, Kay gradually learns the power of listening to people and of letting go, however painful it might be.

The allegories are fairly apparent since the first chapter (has anyone else guessed that the "glow" was Kay herself since the first time she appeared?), and while the story sounds a bit preachy sometimes, the content carried enough strength to speak with me, to reach my heart. I was in a bad mindset when I started the game and the first lines were like transcriptions of some of my thoughts:

"I'm still trying to piece it together. But I can't... I'm completely torn apart. I have family. I have friends... And yet here I am... feeling lonely... again."

Right from the start, I had this feeling that whatever happened next, this game would leave a trace. 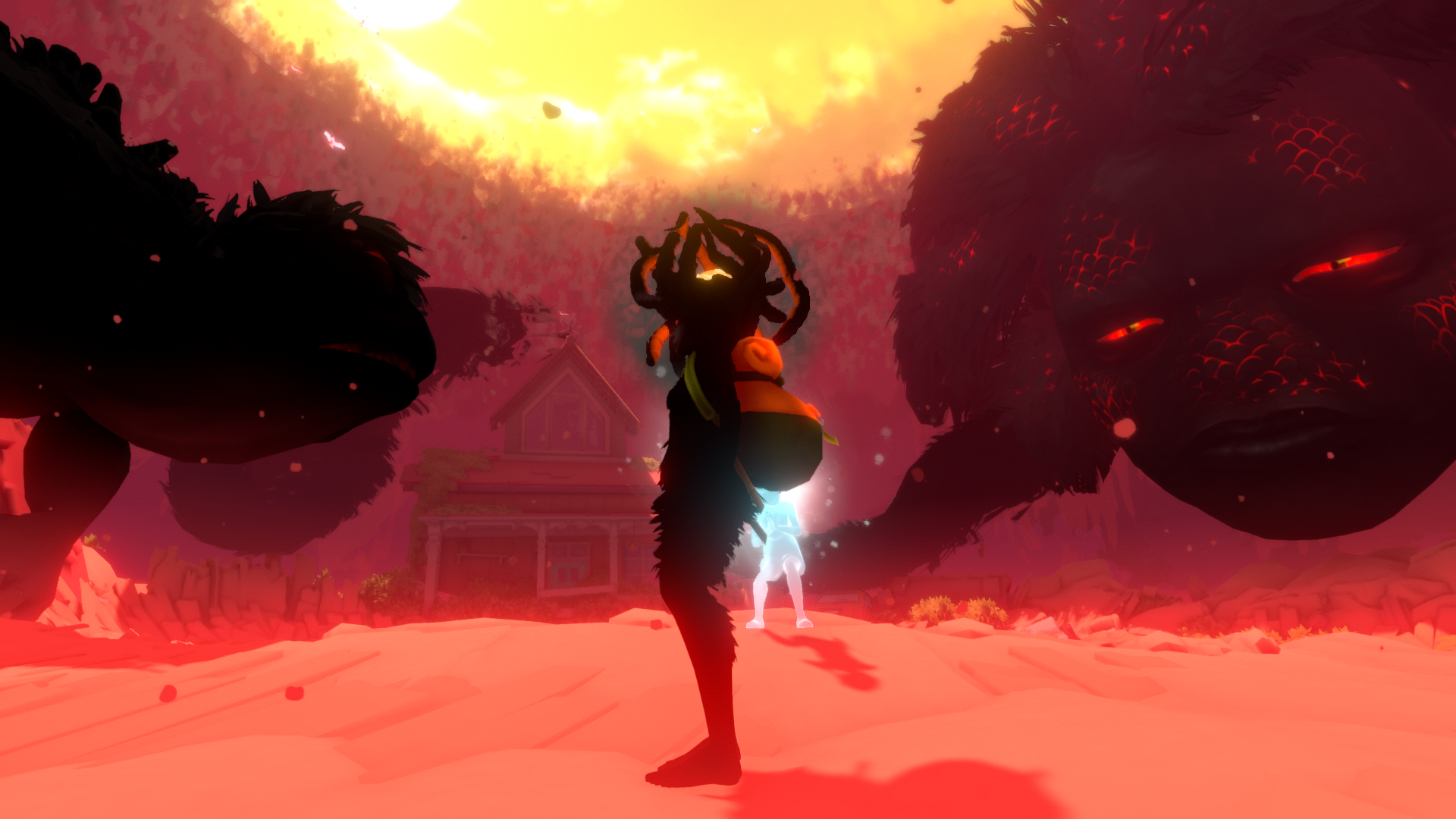 Sea of Solitude's triumph is in part due to one of the game's best decisions: to not offer a clear solution, to not "fix" everything. While both Sunny and Kay's parents eventually get their human forms back, their resolve varies. Kay is able to make amends with her brother after her negligent behaviour and see her parents with more mature eyes; however, her parents find peace between them by accepting that divorce is the best option. Jack's storyline goes in the opposite direction: he starts as a beautiful blue wolf and, as the chapter progresses, he's turned into a dark monster. By the end, he's still that creature because there are things beyond Kay's control; he must deal with his own "monsters", away from their relationship. And Kay must accept she cannot always help people.

As for Kay herself, she makes peace with her own monsters, both the Whale and the creepy humanoid creature with a giant head, by accepting change as an inevitable (and not necessarily bad, even if it looks like it) part of life and trusting herself. By the end she is, as the title of the last chapter says, Feeling Good.

The ending shows a scene that, initially, might seem like a harrowing one: we see Kay, again as a monster, curled in fetal position below an upturned boat. For me, this was an intelligent way to show that yes, things look bright and happy now, but change is not a once in a lifetime achievement; bad things may and will likely happen again, and we must be prepared when the monsters come out of hiding. You, who have played it, did you have another interpretation?

Creative Director Cornelia Geppert talked about how the game was her most personal project yet, a way to express and deal with an emotionally abusive relationship from 2014 to 2017, adding personal stories from other team members to build the fictional narrative. I was reading Destructoid's review on the game and I agree with Josh Tolentino when he described the story as "heartfelt, almost painfully sincere", and compared it to reading a relative's diary. However, I also feel that this diary is not only composed of a relative's words but also our own. Some of us might not have siblings, maybe we never had a romantic partner, and perhaps we don't have problems with our closest family members; but I believe that, at least once in our lives (probably more), we have all experienced doubts, lack of self-confidence, that feeling of disconnection with the world, regret, moments when our self-love falters. It's part of our human existence. Denying it will only cause more pain. As hard as it is, we must fight back with understanding, empathy, and openness for change.

Despite its apparent childlike nature, Sea of Solitude tackles difficult topics with mature and inspiring wisdom. It has its flaws but, the way I see it, it's a game that everyone can relate to, on one level or another. 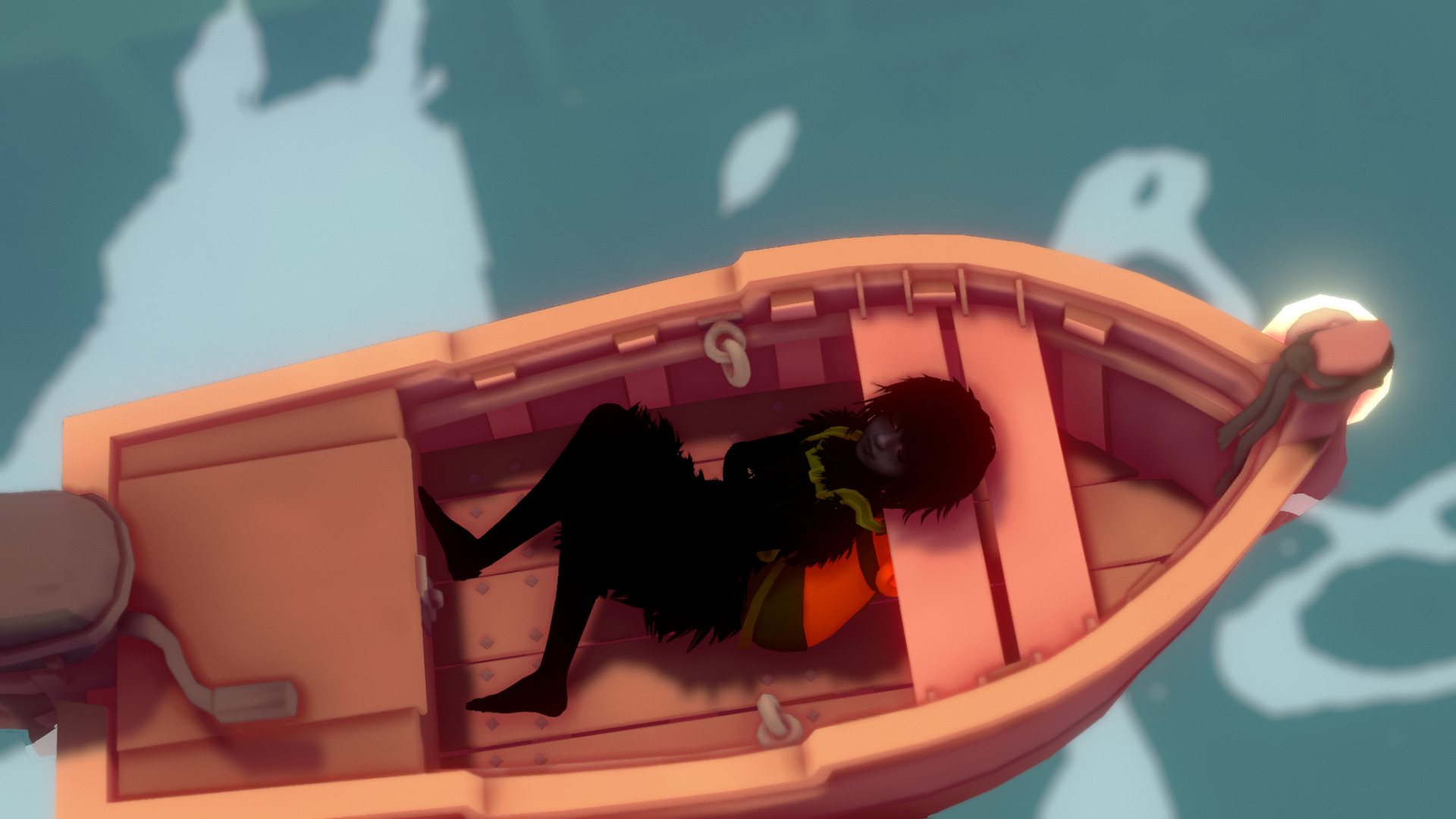 Now it's your turn! Did you play Sea of Solitude? What did you think of it? Did you feel like it some of its moments spoke personally to you? Share your thoughts in the comments section below!