Sex: Let's talk about all the good things & the bad things that may be.

I've heard it said that sex has no place in gaming, gaming blogs and so on. I have also heard it said by others (not here, but other sites) that including the topic of sex is pointless because games are a competitive medium and should never be anything more than that. 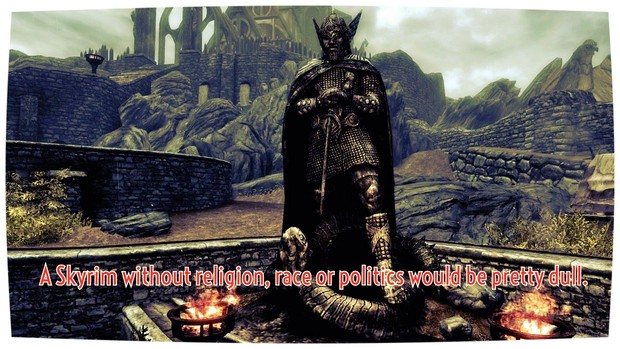 Is there room for improvement in the topic of sex? Absolutely. After all, I just pointed to The Elder Scrolls V: Skyrim. Everyone there is just magically bisexual and sexuality is never really that pliable in humans. Diverse, yes, but not everyone swings both ways like that. Skyrim almost gets away with it for being a power fantasy in general and its strength being in the politics, religion, the issues of racism and the lore surrounding its world. Pleasing the player is one thing and I'm sure having fifteen LGBT people in Skyrim would have made marriage and sexual attraction a needle-in-a-haystack search, but sexuality and romance should still be handled in a realistic way.

At least it didn't fumble the issue as badly as Dragon Age 2. Skyrim prides itself on lore more than characters and story. Bioware games pride themselves on characters, story and wave around the idea they are an LGBT ally so much it feels like a marketing ploy, so we have to judge Bioware games a bit differently. That everyone in Mass Effect has a distinct sexual identity is great but then you have Dragon Age 2's characters that will let you do them no matter who you are and that just makes DA2 weird and creepy. One series got sex right and the other got it really wrong.

Some developers have a hard enough time writing heterosexual relationships in a believable way (some have a VERY hard time), so there's a ways to go in including other sexualities and gender identities though the groundwork is there. There's plenty of work to be done all around.

To dismiss a game for discussing sex and sexual matters is silly. It's a topic that has to be addressed and improved upon in gaming. We already have some good efforts and sex touches a lot of aspects of our lives, so why avoid it?
Login to vote this up!