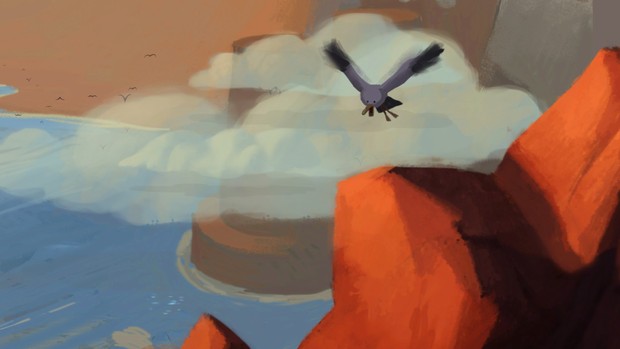 I don't know quite how to feel about Broken Age. I want to scream and yell and claim it is a terrible experience, but I don't overtly hate the game. I had a partial bit of responsibility for bringing it to life (funding it way back when on Kickstater). As much as I want to say that I helped make this, I'm mostly ashamed that I got sucked into the marketing that Double Fine did.

When Tim Schafer had claimed he was going to make an adventure game in the vein of his classic titles, I didn't quite expect him to literally do that. I figured we would have years of advancement in technology and storytelling play a bigger role with the finished product. I expected this new adventure title to do away with some of the more frustrating aspects of the genre's origins.

Instead, Broken Age is a mess of a second half that fails to capitalize on the potential set forth in it's first act. The setup to this game is brilliant; two teenagers coming to terms with the way their lives are playing out. You have Shay, a boy who has only ever lived on a spaceship, breaking free and looking for adventure. You also have Vella, a young girl in a town that believes sacrificing "maidens" to some monster is the only way to protect their village. Vella is obviously a maiden and has to deal with the fact that she will die.

This plays a lot like most people's adolescent years; the game deals with how one can make their stake in the world. Instead of accepting that nothing will get better and the world is all gloom and doom, these characters venture beyond their comfort zones and explore the world outside.

The puzzles may not have been the most mind-bending things around, but that was excusable for the beginning of a game. You never want to throw the hardest thing at a player right off the bat; using a gradual curve to teach the player how the game works and makes their mind adapt to your particular puzzle schemes is a great way to ensure the gamer is left satisfied.

Instead, Act 2 brings about some creatively bankrupt scenarios. The game essentially goes on auto-pilot and solutions take no longer than 5 minutes to pop in your mind. Maybe this has more to do with me being a veteran of the genre, but Broken Age does away with a lot of needless items that used to plague the inventory of it's predecessors.

In doing that, though, the game's puzzles focus purely on logic. With logic at your side, you simply need to look at the problem, check your limited supply and have at it. Eventually you get to the solution and your brain doesn't feel any smarter. At worse, you feel cheated out of a quality experience.

This also happens to the story. Each character, before some insanely convoluted twist, felt like a person with no understanding of their situation. They knew they wanted change, but they weren't sure from what. Come Act 2, we're now supposed to accept that these characters know each other and have some emotional tie (thankfully not romantic).

Couple that with some other revelations about Shay's life and you're left with a portrait of a boy who looks selfish. That feeling of complacency he wanted to break from feels more like it was self-imposed instead of happening out of bad luck. Vella's family also deals exceptionally well with the knowledge of their old tradition being a farce.

The final puzzles of the game are also some of the worst I've ever had to play. You better like wiring robots and depending on omnipresent knowledge to get through; Broken Age features that in spades. Just quite how Shay should know a pattern that Vella is only able to see is beyond me. 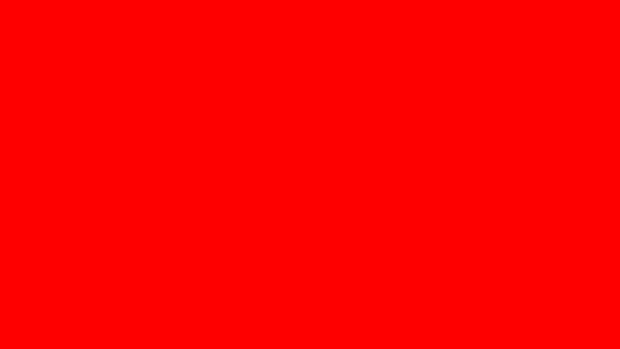 My personal favorite shot of the game. You decide if this is an error or not.

I get that the idea was to have players make the characters interact with each other in an asymmetrical fashion, but the execution feels haphazard. A better approach would be if Vella touched something on the ship and then Shay's world changed a bit. Other games have done this and it works great in making the player feel like their actions matter.

For that matter, why do we only get a few limited areas? Vella goes through the area Shay explored in Act 1 and vice versa. I know this is supposed to make players get acquainted with their environment, but it feels exceptionally cheap. It harkens back to the classic days of adventure gaming where memory was limited and hardware limitations needed to be worked around.

I can only think of Monkey Island and how that game had 4 Acts that all took place in wholly unique environments. The sequels managed to make their worlds bigger, too. Broken Age just feels like the developers started off with ambition and rushed to make their promises half-true. There is no limitation, so why not go crazy?

How about the voice acting? While the cast is assembled of some great actors and their performance in the first act is quite good, the revelations we get in Act 2 should elicit more of an emotional response. Instead, basically everyone reads their lines in a deadpan manner. I think I'd be screaming bloody murder if I got locked in a ship I previously thought was a monster.

You can tell most of the budget was spent on the visual style, because the graphics are beautiful. Everything animates smoothly and transitions feel natural. I'm a bit torn on the slow camera, but it does give you a great look into the detail of each scene. It's like looking at a living water color book; it's whimsical and jovial. 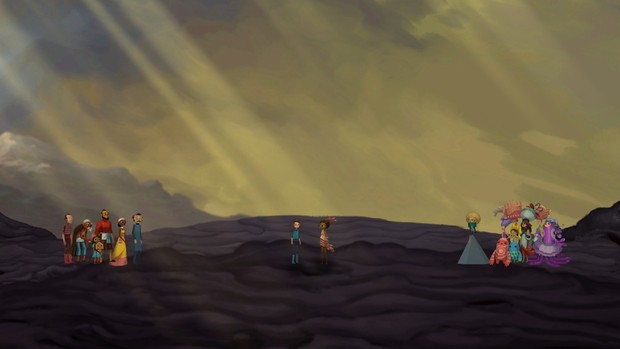 Even right up to the bitter end...which just happens.

But for as much charm the visuals have, the rest of the game just cannot hold up. I may be taking this especially hard as I have wanted this game for nearly 3 years, but I just get the feeling that Tim Schafer and Double Fine got in way over their heads. Their initial budget was a mere $400k dollars. For them to gross around $3 million before the game even came out is obscene.

Then again, I guess we gamers are partially to blame for the lack of quality. We all funded this with nostalgia on our brains. We loved Schafer's previous work and just wanted him to return to a genre he had long left behind. Broken Age doesn't make me believe that adventure games are dead, just that Tim Schafer should probably turn his prospects on to something else.

We can never get back the past; this is a harsh truth we all learn in life. Broken Age could have been about just that. The premise starts off with a similar idea and then abandons it for familiar territory. If only Double Fine had listened to their own preaching and learned to grow over the course of this games development.